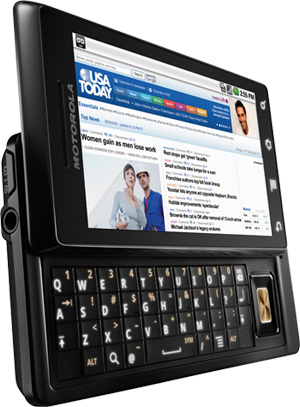 Verizon Wireless fans, rejoice: You now have a smartphone that’s impressive enough to quiet your smack-talking iPhone counterparts. Or at least you will have one when the Motorola Droid goes on sale next Friday (November 6th) for $199.99 with the usual two-year contract and rebates.

Droid, the first cell phone to run the latest Android OS, v2.0 Éclair, includes almost everything a mobile handset owner could want, presents it all intuitively and performs most functions swiftly. We had a couple of hours to play with the Droid today and form some initial impressions, most of which are positive. We’ll naturally have a full review in a couple of days as well.

Among the Droid’s top-level features are a slide-out horizontal QWERTY keyboard; a 5 MP camera with a dual LED flash and a 720×480 H.264 camcorder; Google Maps with voice-prompted turn-by-turn directions; a Google search function that scans not just the Internet but your phone for relevant files as well; a phone book that merges contact information from a variety of email and social networking lists; and connectivity with Verizon’s peerless 3G EV-DO network.

The Droid’s metallic body also feels solid, giving you the sense you’re holding a serious piece of high-tech hardware – which, of course, you are.

The handset’s most obvious attribute is its beautiful and relatively huge 3.7-inch 16×9 LCD. Not only is the Motorola Droid’s WVGA display on the large side for a cell phone, offering an impressive 480×854 resolution. (Most smartphone LCD screens measure a mere 320×480.) Practically, this intense 400,000 pixel packed screen displays extraordinarily crisp, sharp text and bolder colors than any rival cell phone screen in recent memory as well, including the AMOLED on Samsung’s Moment.

Such display precision enables the Droid to display easily-readable thumbnail Web pages as bookmarks, for instance. And at 3.7 inches diagonal, while the Droid’s display is pretty beefy, the phone is only a hair larger and actually a bit thinner than the Motorola Cliq. To put it simply, text, map details and colors are sharper, bolder and crisper than on any other cell phone LCD we’ve seen.

Better yet, the Motorola Droid intuitively makes keeping in touch easier. Borrowing some attributes from the MOTOBLUR interface found on its Cliq sibling, the handset combines all your email and social networking phonebooks into a single master contact list. And instead of requiring that you boot Facebook or some other social networking site to post to a friend’s wall, you can do so right from that friend’s phonebook entry. Plus, instead of making you check individual e-mail addresses, the Droid creates a combined email inbox, with vertical colored bars identifying specific email accounts.

The Droid includes a beta of the free Google Maps Navigation app, which will certainly piss off Magellan, Garmin, Tom-Tom, et al. Features include voice-prompted turn-by-turn directions, the ability to search for points-of-interest along your route and street views, Wikipedia access for info on local sites, and options to lay a traffic or satellite view over the usual map view in varying combinations instead of one at a time. You also can share your location with other Google Maps Navigation users or keep track of your peeps via photos instead of push-pins placed on the map.

The Droid is slow to process large images and, despite image stabilization, indoor shots lit via the dual LED flash often were blurry no matter how still we stood. What’s more, the Droid’s slide-out horizontal keyboard lacks a dedicated row of number keys. But let’s be real – these are minor quibbles. Perhaps we’ll find more to complain about as we dig deeper into our full review, but even this early into the evaluation, we highly doubt that the Droid’s negatives will outweigh its thus far way more impressive positive attributes.