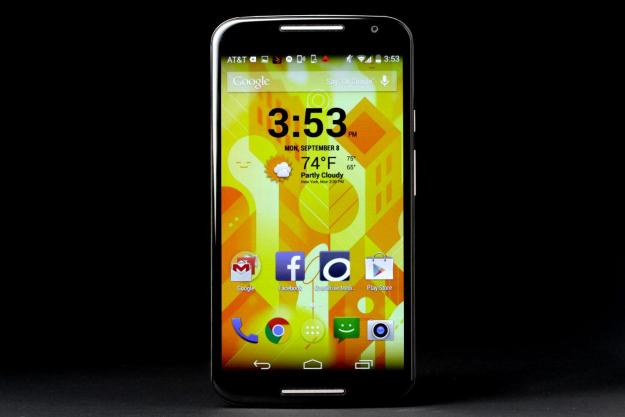 “Motorola wowed us with the first Moto X, but the second generation is even better. The improved screen, high-end processor, and endlessly customizable design make the 2014 Moto X a true flagship smartphone.”

Motorola wowed us with the first Moto X, but the second generation is even better. The improved screen, high-end processor, and endlessly customizable design make the 2014 Moto X a true flagship smartphone.

Last year, Motorola turned smartphone design on its head with the fully customizable Moto X. Even though the Moto X had beauty and personality, it didn’t have the specs to compete with high-end smartphones.

This year’s Moto X stays true to its fashionable roots, but adds high-end specs to the mix, putting it on par with every other flagship Android device from 2014. So, how does the new and improved Moto X compare with the latest from Samsung, LG, and HTC?

Fully customizable and one of a kind

Once you’ve seen a stylish Moto X, every other smartphone you see just looks boring. Thanks to Moto Maker, anyone can be a designer and make their phone look the way they want it to.

Those who buy the new Moto X can choose from 25 different backs, including four kinds of genuine leather from Horweens’ tannery, real wood options that are harvested responsibly, and bright, colorful options. Our monochromatic Moto X, while classy and gorgeous, isn’t the best example of the possibilities, but it still looks refreshing.

The new Moto X looks a lot like the previous model, but this time around, it has a premium metal band around the edges, instead of plastic. The metal looks and feels high-end. It also adds a nice shine to the phone, as does the inset, circular Motorola logo on the back. The slight curve to the back makes it very comfortable to hold in your hand and the matte finish on the back gives it a good grip.

Once you’ve seen a stylish Moto X, every other smartphone you see just looks boring.

The volume button sits below the power button on the right-hand side. The power button has a slight texture to it, so as to distinguish it from the volume button, which is another small touch that makes a big difference. Motorola placed the headphone jack at the top and the Micro USB port at the bottom of the phone. Two speakers are located at the top and bottom on the front of the Moto X, while, the camera, which features a circular LED flash, is on the back center of the device.

This year’s Moto X is slightly bigger than last year’s model, mainly because the screen size bumped up to 5.2 inches. Even so, the size difference is minimal, thanks to slimmer bezels and the economy of space along the top and bottom of the phone. Like the gorgeous LG G3, the Moto X is almost all screen.

It has a full HD, 1080p OLED screen, too, so images look bright and crisp. Unless you’re obsessed with pixels, you won’t even notice that it’s not a Quad HD screen.

The new Moto X runs Android 4.4.4 KitKat and unlike most other smartphone manufacturers, Motorola keeps the software as pure as possible, with only a few alterations and additions. The only bloatware you’ll find on the Moto X comes from AT&T.

Unfortunately, updates will come from AT&T as well, so they’ll be a little slow, though Motorola is guaranteeing at least one major update for owners of the phone. If you want to keep up to date with the latest and greatest, we recommend you buy a Nexus 5 because it gets updates directly from Google.

Among Motorola’s more interesting software tweaks, stands the Moto voice assistant, which learns your voice and only responds to you. She harnesses all the power of Google Now and we found her very helpful, as well as accurate at fulfilling our requests.

Gesture controls on the X are also great. The one we used most often is also probably the most simple. All you have to do is swipe your hand over the phone when it’s sleeping and the clock will pop up, showing you the time and any notifications you might have. We found this feature incredibly useful. It makes checking the time on the Moto X easier than it is on any other smartphone, including the LG G3, which features a similar thing called KnockOn.

You can also turn the phone like you would a door knob to activate the camera at any time and perform other cool gestures for typical tasks.

The first Moto X was a solid, mid-range smartphone, but this time around Motorola gives us a true flagship. The new Moto X has many of the same high-end specs as other flagship smartphones, including Qualcomm’s 2.5GHz Snapdragon 801 processor and 2GB of RAM.

The first Moto X was a solid, mid-range smartphone, but this time around Motorola gives us a true flagship.

This year’s Moto X proved very fast in all of our tests. It downloaded and launched apps without a hitch, returned Web searches at lightening-fast speeds, and streamed YouTube videos without buffering once.

Those of you who are curious about how the Moto X compares to other flagship smartphones in benchmark tests will be pleased to know that Motorola’s new phone is very competitive.

The new Moto X scored a whopping 22,937 on the Quadrant benchmark and19,395 on 3D Mark’s Ice Storm Unlimited test. In comparison with the 9,000 scored by the first-generation Moto X, This year’s model is lightening fast. The score is even close to the impressive 23,000 Samsung’s Galaxy S5 scored on Quadrant and the new Moto X actually beats the S5 on the Ice Storm Unlimited test where it scored 18,500.

In addition to a great processor and good amount of RAM, the Moto X comes with your choice of 16 or 32GB of storage. Unfortunately, there’s no MicroSD card slot, so you’re stuck with a limited amount of storage, which is something you’ll never encounter on the Galaxy S5, LG G3, or HTC One M8.

The 2014 Moto X sports a 13-megapixel camera on the back, which has a much higher-resolution than the 10-megapixel shooter on the previous version. The camera focuses very quickly, but sometimes missed the mark. In bright lighting conditions, it tends to overexpose light colors, especially if you focus on the wrong thing. Sometimes, this causes bright colors to turn almost neon or get bleached out entirely.

In low light, the Moto X’s camera took slightly grainy pictures and the flash, like most flashes, seemed too bright and too white.

The 2-megapixel front-facing camera works well for selfies and will handle your video chatting needs without a problem.

Overall, we’re not too impressed with the camera. It’s serviceable but like most Motorola phones, it’s far from impressive.

The data speed was quick and we had no problems on AT&T’s network. The call quality was also great. We had no troubles hearing or being heard.

In our tests, we found that the Moto X’s 2300mAh easily lasted through a full day of heavy use. Unless you barely use it though, it won’t last you much longer than that. The LG G3, Samsung Galaxy S5, and HTC One M8 all offer better battery life than the new Moto X.

Motorola wowed us with the first Moto X, but the second generation is even better. The improved screen, high-end processor, and endlessly customizable design make the 2014 Moto X a true flagship smartphone. The nearly pure Android experience is refreshing as are the few flourishes Motorola added to the user experience.

The first Moto X may have been a solid mid-range phone, but this year’s Moto X is undoubtedly high-end. It performs at the same level as most other flagship phones and is the most customizable smartphone you can buy.