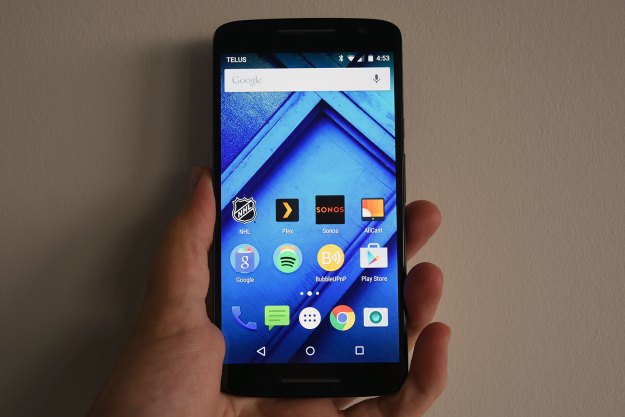 “With best-in-show battery life around and solid features, the X Play is the workhorse phone you’ll want.”

Give Motorola credit. The company had the humility to bow out of the flagship battle and take aim at the underserved mid-range and affordable markets when it launched the original Moto X in 2013. The device that followed last year once again proved that a phone didn’t have to be remarkable to be good. The weak link in both cases was the rear camera.

The Moto X Play is the middle sibling in the company’s triple rollout this year, with the premium (known as the X Style outside the U.S.) at the higher end and the new Moto G at the lower end. While Motorola hasn’t sold the X Play in the U.S., rumor has it that Verizon will take it under its Droid Maxx brand. With a huge battery, better camera, and low price, how much game does the X Play have?

Though it doesn’t have the breadth of the Moto X Pure Edition, Motorola crammed whatever it could into the X Play to help it stand out, like a middle child at the dinner table. It runs on a 1.7GHz Snapdragon 615 octa-core processor, 2GB of RAM, 16GB or 32GB of internal storage, and a 21-megapixel rear camera (plus a 5-megapixel front-facer). There’s also a 5.5-inch 1080p LCD screen, with Android 5.1.1 Lollipop.

It’s interesting that the phone has two Nano SIM slots — the spare can double as a MicroSD slot for extra storage. The battery is one of the pillars this phone stands on, at a whopping 3,630mAh, which is considerably larger than most flagship handsets. The tighter build and larger battery contributes to the device’s added heft. It may not be much heavier than the competition, but it feels like it is.

Motorola opted not to outfit the X Play with an AMOLED screen, taking away some of the great contrast that characterized its two predecessors. The colors and black levels are still good, though users migrating from one of the previous models will surely notice a difference.

The curved back is contoured in much the same way as before, but this time Motorola used a textured rubberized coat for better grip. At first glance, the recessed Motorola logo in the middle gives the impression that the company is going the LG route and adding actual hard buttons on the back of the phone, but it’s merely aesthetic. The back plate does come off, and that too is for aesthetic reasons, given that other colors can be swapped in. The sides are made of plastic that looks like metal.

The front has identical slits along the top and front, giving the device a bit of a symmetrical feel. Often times, I found myself picking up the phone in the wrong orientation. The headphone jack is at the top, Micro USB port at the bottom, and power and volume rocker on the right side.

The X Play hews as close to a stock version of Android as you will find outside of Google’s Nexus line. There are virtually no overlay or software add-ons to speak of, and the few apps Motorola included are those that have proven useful. Gone, however, is Assist, having now been integrated into the wider Moto app that also controls the built-in voice activation platform.

The old features from Moto Assist are now baked into Moto Voice.

Since the first Moto X, it has always been possible to awaken the phone by saying the magic words it needs to hear through what it calls Touchless Control. The phrase is customizable, and the X Play proved adept at recognizing mine (“Go, go gadget!” of course), including over some background noise (it’s even better via a Bluetooth headset). Moto Voice was always baked into the phone, but with more commands comes the inclusion of the cloud. It now integrates with Google Now and general searches, so when it needs to, Moto Voice defers to Google to complete a request.

Not all requests need Net access at all. Check voicemail, send text to…, remind me to…, take a photo, open calendar, and take a selfie are a few examples of offline voice searches you can perform. Saying “get a list of commands” will list them all. The cloud comes in for fancier requests, like sending a WhatsApp message, posting to Facebook, or initiating a search query.

The old features from Assist are now baked into Moto Voice, meaning it’s possible to enable driving, sleeping, and meeting modes, activating the voice assistant to chime in under specific circumstances. It is also possible to tell Moto Voice to navigate back to your home, which requires that you set your home address and that you use Google Maps. For locations and activities to work, location settings must be set at “high accuracy.” Worrying about privacy might deter some from diving further into this because it could impact other apps, but it’s there if you want it.

The Moto Display lock screen with plain white text is also back, and works much the same as before. The phone’s sensors do need to register some movement to show the latest notifications (unless you have checked off the box that pops them up automatically as they come in). Waving your hand above the phone doesn’t work because it needs to feel movement or a vibration to turn on. I found this annoying at times, though not enough to consider it a major problem.

Strong performance, but not for hardcore gamers

The lightweight Android treatment, coupled with the massive battery, means the X Play will last more than a day, even with heavier usage. It might be a stretch to call it a beast, but it earns its stripes as a serious workhorse.

The Qualcomm Snapdragon 615 processor isn’t the fleetest of chips, but it doesn’t really have to be for the type of person who will benefit most from this device. Getting around and navigating across the phone’s features and functions never feels like a slog. The camera launches fairly quickly and Moto Voice reacts with little lag. Streaming music is fine, as is video from Netflix or other apps. Plex worked fine, and so did casting to a TV via Chromecast.

The hefty battery packed into the X Play kept it running for close to 48 hours.

Games also work okay, albeit with some variations that coincide with how demanding the title is on a phone’s processor. Playing casual games is a breeze, but others with high-end graphics might not perform as smoothly. The limitations of the processor are most evident here, though users looking for the best of the best on the gaming side will probably move on to the X Pure Edition, or something more robust.

The X Play is more of a phone for your routines. If you’re the type who messages, browses, listens to music, streams a little, makes a few calls — on any given day — then this device handles all that without a problem. The 16GB of internal storage, which is more like 11GB to start, isn’t enough for me personally, but at least there’s MicroSD expansion and a 32GB version. I highly recommend the 32GB version if you take a lot of photos, download anything, or use more than a dozen apps.

Being the bugaboo of the Moto X line in the past, it comes as no surprise that Motorola went with a 21-megapixel image sensor for the rear camera. Color correcting temperature is also supposed to improve saturation and color balance, setting up a combination that should lead to better images.

The improvement is obvious when shooting conditions are the most optimal. Like many mid-range phones that have drastically improved camera performance, quality depends on how much light passes through the lens. In daylight and indoor settings, the X Play clearly outperforms its predecessors, turning out excellent images.

The hand-twisting motion to automatically launch the camera is back, though you need only twist your wrist once in both directions to feel the vibration indicating the camera is turning on. Motorola is confident that its auto-focusing is smart and fast enough, but I had some trouble. Having tap-to-focus and exposure control in one place was convenient; except the software takes longer than it should to lock on to a subject. This is most evident in macro and low-light shooting.

Like the previous models, night and low light are tough challenges that the X Play’s camera struggles to overcome. Overall, image quality is better than it was in the past, but it’s undoubtedly a step down from the crisp daytime images. As there are no full manual controls, the software seems to ramp up the ISO to a point where unnecessary noise seeps into a photo. To make matters worse, shutter speeds are very slow, all but ensuring that the shake of your hand will blur the result. The night mode is no substitute, either; it essentially does the same thing.

The hefty 3,630mAh battery packed in the X Play kept it running for close to 48 hours on one charge — and this is with pretty routine usage. It’s hard enough to find phones that can go 24 hours on regular usage without needing a top-up, but the X Play delivers that in spades.

Even with games, streaming music, streaming video, social media, and photography, the X Play kept on going. A heavy test that included all of the above plus phone calls on speaker, YouTube loops, streaming from network attached storage, and uploading images still saw the device at 35 percent after close to 18 hours. Impressive results, and one of the best battery performances I’ve seen in some time.

Since the Moto X Play would likely be labeled the Droid Maxx 2 under Verizon, the name is nothing more than a marketing angle. Canada and Europe already have the X Play. In turn, the Moto X Pure Edition has already hit the U.S. as Motorola’s flagship of 2015.

The guts of the device are what counts, and the large battery is clearly aimed at anyone who feels some form of battery anxiety on a daily basis with their handsets. The X Play won’t win accolades for being pretty or even super exciting, but it has the right stuff to win over skeptics, particularly because of the large 5.5-inch display, solid performance, and huge battery.

More than just a series of specs on paper, the Moto X Play delivers reliable execution. It’s a workhorse for the user who simply wants a phone that works well.

Video-editing app LumaFusion to get a Galaxy Tab S8 launch
Does the Google Pixel Watch come with a charger? What’s in the box
The Pixel 7 and 7 Pro are finally here, and with price tags you’ll love
Everything announced at Google’s October 6 event: Pixel 7, Pixel Watch, Pixel Tablet
Google Pixel 7 and 7 Pro buying guide: everything you need to know
Samsung Galaxy Watch 5 Pro vs. Galaxy Watch 4 Classic
Xiaomi’s new phone has a 200MP camera — and its photos are stunning
It’s official: Apple is required to make a USB-C iPhone by 2024
The Google Home app finally has the big redesign you’ve been waiting for
Relax, the EU’s scary USB-C rule won’t rob you of fast-charging benefits
Lenovo’s AirPods alternatives are on sale for just $15 today
This Garmin deal is perfect if you’re looking for a cheap smartwatch
I regret buying my iPhone 14 Pro for 3 big reasons