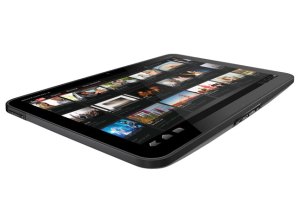 Despite a wave of hype, Motorola’s mobile device lineup, which includes the Android 3.0 Honeycomb-based Xoom tablet and the Atrix 4G smartphone, has failed to catch on with consumers, report Forbes and Business Insider.

The low numbers for the Xoom come via an estimate made by Deutsche Bank, which predicts that Motorola has only sold about 100,000 Xoom tablets since the device debuted on February 24.

Apple, by comparison, sold 300,000 iPad 2 devices in the first weekend alone. Since that time, it’s been nearly impossible for customers to get their wanton hands on the next-generation iPad. Experts predict that Apple has sold approximately 20 million iPad 2s, so far. So not only has the iPad 2, which went on sale on March 11, outsold the Xoom — a device many consider the closest competitor in the tablet market — but it’s done so having been available to customers for half the time.

According to Pacific Crest analyst James Faucette, who spoke with Forbes, the Atrix 4G is also selling “well below forecast” due to AT&T’s $49 price point of the Apple 3GS and the HTC Inspire.

The poor showing of both the Atrix — one of our favorite handsets currently on the market — and the Xoom, which was a show-stopper at this year’s Consumer Electronics Show, has caused Pacific Crest to chop the amount of revenue it expects Motorola to generate in 2011 by $1.5 billion.

This is just the most recent round of bad news for Motorola and the Xoom, which Consumer Reports yesterday said compared more closely to the original iPad than the iPad 2. The iPad 2, on the other hand, received the renowned tester’s top marks in the tablet department, despite lacking a few key features available on in the Xoom, like built-in card readers and Flash support.

If even a stellar device like the Xoom can’t compete against the Apple iPad juggernaut, it seems as though the entire tablet market may go the way of the MP3 player market: Apple in front, and nobody else anywhere to be seen.