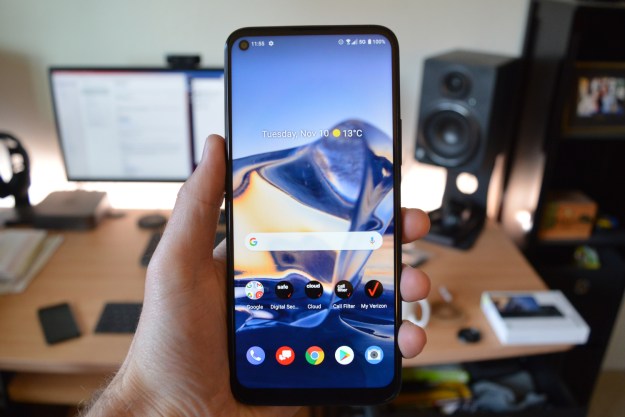 “The Nokia 8 V UW is a solid offering, but gets beat by stiff competition at the same price, or less.”

Right now, 5G is all the rage. With networks claiming “nationwide” coverage and phone companies slapping “5G” onto the name of every new phone, it makes sense that you would think it’s a big deal. One day it will be, but for now, you’re facing a decision: Should you get a 5G-compatible phone now, even though it’s not really going to be all that revolutionary for you, or should you wait until 5G is really important?

Nokia thinks you should do the former. Recently, the company launched the Nokia 8.3 5G, its first 5G-enabled release. Now, it’s taking that device a step further, with the new Nokia 8 V 5G UW. (Yeah, it’s a mouthful.)

The new device is HMD Global’s first carrier-focused phone, with the “V” in its name standing for Verizon. The rest of the name is pretty standard — except for the fact that the UW stands for “ultra wideband.” That’s right, this phone supports Verizon’s 5G mmWave network.

Apart from that, however, there’s nothing different about the phone compared to the original Nokia 8.3. It even costs the same at $699. Here are my thoughts after a few days of using the phone. Note, because the phone is so similar to the standard Nokia 8.3, we won’t doing a full review. You can check out our full review of the Nokia 8.3 here.

The Nokia 8.3 V 5G UW is a relatively big phone, with a 6.81-inch display and a 1080p resolution. It’s not the highest resolution, but it supports always-on HDR, gets nice and bright, and is definitely sharp enough for most uses.

Around the display can be found relatively thin bezels, though the chin at the bottom is pretty big for a 2020 device.

The rest of the design is modern, but not much about it really stands out except for the big old circular camera bump on the back. There’s a fingerprint reader on the side, which is fast and responsive, and there’s a headphone jack at the bottom, which is nice to see. And there’s a hole-punch cutout on the top left of the display.

The phone offers a Qualcomm Snapdragon 765G processor, coupled with 6GB of RAM and 64GB of storage. It’s powerful enough for most tasks, and while it’s not quite as zippy as an 8-series processor, the vast majority of users won’t notice a difference.

Powering it all is a 4,500mAh battery that will easily get you through a full day of use, with many people able to get two days of use. The phone ships with Android 10, and it will get Android 11. Unfortunately, it won’t get updates beyond Android 11, which is a big downside compared to the competition.

The overall software experience is pretty stripped-back, but the Verizon-ness undoes this a little. Right after setting up your phone, you’ll notice four Verizon apps, right on the home screen, that you have to deal with. You can’t delete them either, so the most you can do is doom them to your App Drawer.

The camera is a quad-lens camera, and it’s great. There are four sensors on the back, including a 64-megapixel main sensor, a 12-megapixel ultrawide camera, a 2-megapixel macro camera, and a 2-megapixel depth sensor. Photos are vivid and bright, with plenty of detail the majority of the time, especially in low light. I would have liked to have seen a telephoto lens instead of a macro sensor, and the macro sensor isn’t great, but those are really the only complaints to make about the camera.

I’ve really only focused on the good things about this phone so far, but there are some bad things too — and those bad things essentially mean that you should avoid the phone altogether.

Let’s talk about 5G real quick. There are two kinds that you need to care about: Sub-6, which can travel long distances but doesn’t necessarily get that fast, and mmWave, which is really fast but can’t travel distances or penetrate obstacles. This phone supports both, specifically on Verizon. But you really shouldn’t care about that — Verizon’s mmWave is pretty much irrelevant right now, and while you can get Sub-6 connectivity pretty widely, it’s not that fast yet and won’t change much about using a phone. In my area, Verizon’s Sub-6 5G is available, and it’s relatively fast, but not that much faster than a good LTE connection.

Then there’s the price — and it’s the real killer. At $700, the phone is a little hard to sell. Sure, there are good things about it, and the camera is great, but you could get a Google Pixel 4a 5G instead, which costs a significant $200 less than this device, and has better software support, a camera that’s at least on par if not better, the same processor, and more. It doesn’t support mmWave but that shouldn’t matter — and if you really care about mmWave, you can get the Verizon variant of the Pixel 4a 5G, which costs $600. That’s still $100 less than the Nokia 8 V UW.

The Nokia 8 V 5G UW isn’t a bad phone by any means. It’s relatively powerful, and has a nice big screen, a great camera, and a stripped-back software experience. But the price just isn’t right. Nokia and Verizon are charging a premium for 5G, and it’s not worth buying into yet.

The only way this phone is going to make sense is if (or more likely, when) Verizon decides to deeply discount it as part of the latest holiday or add-a-line promotion . It would not be surprising if in a few months the Nokia 8 V UW becomes available for something like $450 when putting it on a financing plan, and at that point, it’s dramatically more enticing.

If you don’t mind spending $700 and simply want the best phone you can get, then go for the Samsung Galaxy S20 FE, which has a better processor, a great camera, and comes at the same price point. Or, you could get the new iPhone 12 Mini, which is more powerful than any Android phone currently on the market, and comes in a nice pocketable size.

The Nokia 8 V 5G UW should last for a two-year upgrade cycle, so it’s only guaranteed to get one major software update. It’s also not water resistant, so you’ll want to do your best to keep it away from water.