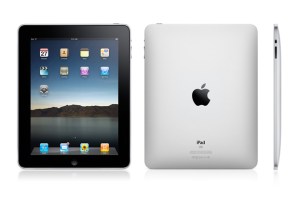 You may want to reconsider if you’re set on a putting (or asking for) an iPad under the tree this holiday season: you might be better off giving (or receiving) an Apple gift card. According to a report in Digitimes, Foxconn, a China-based manufacturer of iPads and iPhones, has been instructed to ship between 400,000 to 600,000 units of the iPad 2 “within the next 100 days.”

The report cites sources within Foxconn, but neither Foxconn nor Apple have yet to confirm that the iPad 2 will indeed be shipping sometime around the end of February. Digitimes reports that Apple had hoped to send the iPad out the door in January, but was delayed due to ongoing firmware testing.

What can we expect from the second generation iPad? It’s widely suspected — but not yet confirmed — that there will be two cameras in the style of the iPhone 4, one of which will be front-facing to enable Apple’s FaceTime video chatting.

There’s also well-founded speculation that the forthcoming iPad will support both GSM and CDMA networks — the iPad currently only runs on a GSM network. The CDMA support makes sense as the iPad is currently offered through Verizon, but — as Verizon’s network runs on CDMA technology — its iPad version requires an external MiFi hotspot for 3G access.

Will Apple deliver by February’s end? The timing of the release does seem uncomfortably close to the holidays.  And according to the Digitimes report, Apple may also have close to two million original iPads left in inventory by the end of the month — that’s a lot of potentially obsolete hardware sitting around.

The rumor itself of the impending iPad 2 release may be more troublesome for Apple as it stands to lose holiday sales of its current model on account of it. We may see Apple move to address the speculation in the coming days.