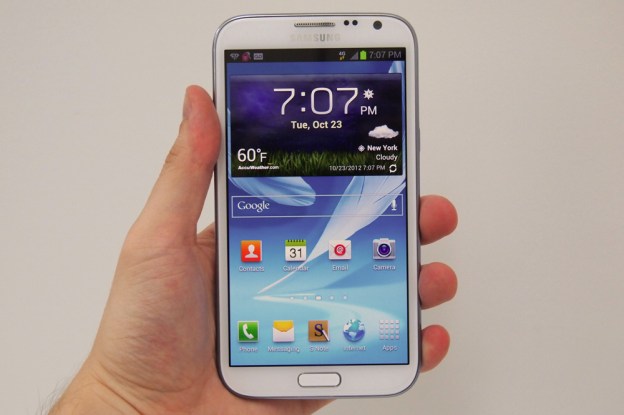 Check out our review of the Samsung Galaxy Note 3 phablet.

Huawei’s recently unveiled 6.1-inch Ascend Mate may be the largest smartphone in the world, but it might not hold that title for too long. Samsung is reportedly preparing to launch a larger version of its Galaxy Note with a monstrous 6.3-inch display.

Like most other Samsung smartphone rumors, this bit of news comes from the Korea Times. This alleged boost in screen size would mark an increase of about .8-inches compared to the already massive 5.5-inch Galaxy Note 2. According to the Korean news source, Samsung will use the next Galaxy Note handset as a flagship to showcase its forthcoming Exynos Octa processor later this year. The current “phablet” device boasts a quad-core Exynos chip, but this new unit could potentially pack double the speed and power.

As Samsung bolsters its plans for what could be its next major smartphone launch, the manufacturer also appears to be loosening its ties with rival Apple. The Korea-based company is allegedly pitching some of its processing products to smartphone makers in China in order to reduce its dependency on the Cupertino, Calif.-based iPhone creator. So far, Samsung has reportedly reached out to manufacturers such as Huawei and ZTE for collaboration.

“We have introduced the Exynos 5 Octa to appeal to Chinese clients and diversify our client base in China with better pricing and output commitment,” a senior Samsung executive said to the Korea Times.

Huawei hasn’t spoken much on the matter, but an executive did reportedly confirm that the company has been in talks with Samsung.

“Yes, we were approached by Samsung,” the unnamed official said to the Korea Times. “If the firm offers favorable conditions, there’s no reason to deny the new business.”

This isn’t the first time that the Korea Times has reported that a new Galaxy Note device is in the works. The news source revealed that the Note 2’s successor would have a lengthy 6.3-inch screen about one month ago. While this may not necessarily be new information, the fact that this news is resurfacing is sure to further fuel the rumor mill.

We’re not sure when Samsung plans to reveal or launch another Galaxy Note, but we’ll be interested to see what the company has in store at next month’s Mobile World Congress in Barcelona.

The best Samsung Galaxy S22 Plus cases and covers