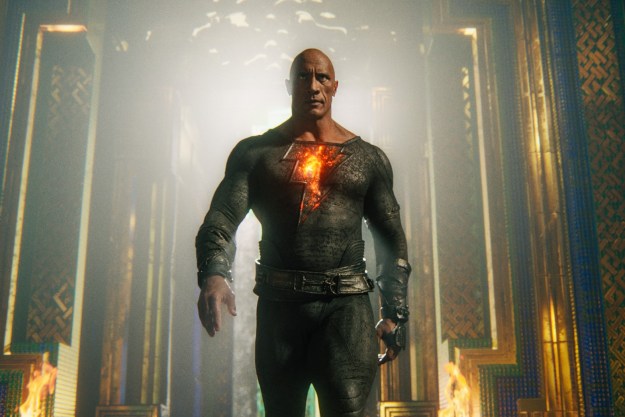 “Dwayne Johnson is the best part of Black Adam, an otherwise underwhelming film that repeats many of the mistakes of prior DCEU movies.”

At this point, it’s reasonable to not realize the “DC Extended Universe” is still something in active development. From its multitude of canceled or delayed projects, to the near-constant stream of controversies surrounding DCEU films and shows, to all of the well-publicized studio dysfunction behind the scenes, it’s amazing that any project makes it to the screen amid all of that chaos.

And yet, Black Adam has finally arrived in theaters — a feat seemingly accomplished through the sheer force of will of its star, Dwayne Johnson, who’s been dragging it toward production for more than a decade now.

It’s an OK film, too — mainly due to Johnson’s boundless charisma — but it falls far short of being the course-correcting cinematic spectacle the DCEU is desperately in need of.

Directed by Jungle Cruise and Orphan filmmaker Jaume Collet-Serra, Black Adam casts Johnson as Teth-Adam, a former slave who was granted the powers of Egyptian gods to protect humanity, only to end up destroying his homeland of Kahndaq while seeking vengeance for his murdered family. Imprisoned for more than 5,000 years by the same wizards who imbued him with near-invincible power, Teth-Adam is awakened by an archaeologist searching for a powerful relic to free modern-day Kahndaq from a vicious mercenary network. Teth-Adam’s explosive resurrection and the resulting slaughter of the mercenaries soon puts him on the radar of the Justice Society of America, a team of superheroes tasked with maintaining international peace, who must decide whether he’s a potential enemy or ally to the world.

Johnson is joined in the cast by Aldis Hodge (Straight Outta Compton, One Night in Miami) as JSA leader Carter Hall (aka Hawkman), Pierce Brosnan (GoldenEye) as the superhero sorcerer Kent Nelson (aka Doctor Fate), Quintessa Swindell (Voyagers) as wind-controlling hero Maxine Hunkel (aka Cyclone), and Noah Centineo (To All The Boys I’ve Loved Before) as size-changing, aspiring hero Al Rothstein (aka Atom Smasher).

Outside of the film’s superpowered characters, Sarah Shahi (Sex/Life) portrays the archaeologist who awakens Teth-Adam, Bodhi Sabongui (The Baby-Sitters Club) plays her son, and comedian and actor Mohammed Amer (Mo) plays her brother. Marwan Kenzari (Aladdin) plays the Intergang member in pursuit of the powerful relic known as the Crown of Sabbac.

It’s a crowded cast, but as the title suggests, Johnson’s superpowered character is the focal point of the story, and his performance often drags it back to center whenever the meandering, overstuffed narrative begins to wander.

For much of the film, Black Adam feels like a project uncertain of exactly what type of film it wants to be, and as such, it borrows elements from various DCEU films before it. That would be fine if the DCEU films maintained a relatively consistent tone akin to their counterparts at Marvel, but franchise studio Warner Bros. prides itself on letting each DCEU film deliver a standalone experience.

The tone of Black Adam pinballs from the silly superhero hijinks of 2019’s Shazam! to the darker filter of Zack Snyder’s grim and gritty, hero-averse version of the DC Comics universe to the CG-fueled, brawny action spectacle of 2018’s Aquaman over and over again, allowing little time for any overarching aesthetic to take root. Johnson’s Teth-Adam — who is compelled to remind everyone that he’s not a hero and is totally OK with killing people at least once every five minutes — bounces between angsty contemplation of his tragic backstory and trying to nail down a snappy catchphrase, alternately injecting humor and bleakness in moments where they seemingly don’t belong.

The film’s decision to make Teth-Adam’s willingness to kill villains his primary, defining characteristic is also puzzling given that WB and DCEU filmmakers have spent a decade insisting that superhero characters killing people is no big deal. Superman, Batman, Wonder Woman, and countless other DCEU heroes have killed hundreds of villains across their DCEU films, so the suggestion that Teth-Adam’s approach to justice is somehow at odds with what the world understands superheroes to be feels forced (at best) in Black Adam, and verges on laughably unaware the more often this sentiment is reiterated in the film.

Black Adam also borrows from one of the most-maligned recurring elements of DCEU films to date, closing with a CG-fueled villain battle that is so mired in digital effects that it would look just as (if not more) comfortable in a video game cutscene.

This is an issue that isn’t reserved to just DCEU films — the Marvel Cinematic Universe has made that mistake more than once, too — but it’s been a particularly disappointing element in some of the studio’s standout films so far. Wonder Woman and Aquaman, two of the best DCEU films to date, both concluded with frantic, confusing sequences of CG mayhem that ended otherwise entertaining adventures on a down note, while films like Justice League and Suicide Squad (the 2016 film, not James Gunn’s 2021 reboot) turned into glorified game cinematics nearly every time action unfolded.

Johnson is one of the most capable action actors in Hollywood these days, so it’s a shame to see him reduced to a head in a motion capture suit, all wrapped in visual effects, as often happens in Black Adam.

Still, when Black Adam lets Johnson have fun with the role, the film is at its best.

Johnson is endlessly fun to watch in just about anything he does, and it’s his charm and charisma that elevates Black Adam above its long list of flaws. He’s the rare actor who can effortlessly pivot between heartbreaking pathos, smirking humor, and intimidating self-assurance, and he puts all of these — and other — aspects of performance to frequent use in the film. Without him, Black Adam is one of the worst DCEU films to date, but with him, it’s an entertaining experience that sits somewhere within the highest tier of entries in a frustratingly disappointing cinematic universe.

While the crowded cast is light on standout performances from anyone other than Johnson, Brosnan does deliver a memorable performance as the enigmatic Doctor Fate, who feels like the supporting character most deserving of another appearance in the DCEU. Both Swindell and Centineo are fun to watch in limited screen time too, although that has more to do with the spectacle of their powers than their performances in the film, which doesn’t give them much to work with as characters when they’re not engaged in battle.

Too little, too late

Although Black Adam manages to be an entertaining film thanks to its star’s performance, even Johnson himself can’t manage all the heavy lifting required to turn the film into the franchise-changing project the studio seems to hope it will be.

Flashy and fun at times, but overly reliant on its star and a cohesive vision for the DCEU that it neither projects nor even exists at this point, Black Adam offers mountains of potential without much payoff. Audiences looking for an escapist adventure without any meaningful mental or emotional connection to the story — preferably with bright colors, plenty of explosions, and cringeworthy jokes — will likely leave Black Adam satisfied. Those looking for something deeper, though, aren’t likely to be as happy with the film’s return on their investment.

It’s no secret that the DCEU needs something big to turn it around and unlock its potential, and unfortunately, Black Adam isn’t that project. It is, however, a relatively entertaining film. For now, it seems like that will have to do.

Warner Bros. Pictures’ Black Adam is in theaters now. For a spoiler-filled overview of the film, including the explosive ending, check out our Black Adam’s ending explained article.

The best superhero movies of all time
Black Adam faces a dire choice in the new trailer
The Lord of the Rings: The Rings of Power review: perfection, precious
The best action movies on Disney+ right now (October 2022)
Portugal vs Uruguay live stream: watch the game for free today
Brazil vs Switzerland live stream: watch the game for free today
Where to watch the holiday classic A Christmas Story
5 movies to watch if you liked Devotion
The 10 most likable Futurama characters
Instafest app: How to make your own Spotify festival lineup
Billy Fox on editing Devotion’s action scenes and finding the heartbeat of a film
Irreverent cast and producers on their new fish out of water dramedy
Where to watch the Will Ferrell Christmas movie Elf