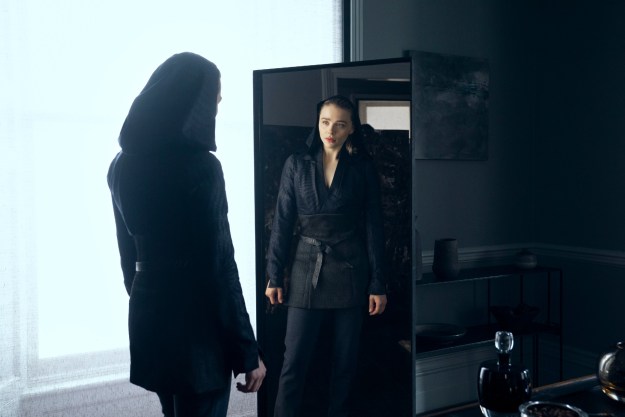 Adapting the work of sci-fi literary icon William Gibson for television or film has always been a tough task, but that hasn’t stopped a long list of acclaimed filmmakers from giving it a shot over the years — to varying levels of success. The latest team to do so takes on one of the author’s more recent tales, The Peripheral, for a Prime Video series with plenty of star power both in front of the camera and behind it.

Developed by Scott Smith (The Ruins, A Simple Plan) with Westworld creators Jonathan Nolan and Lisa Joy, The Peripheral casts Chloë Grace Moretz (Kick-Ass, If I Stay) as Flynne Fisher, a young woman in small-town, near-future America who finds herself caught up in a timeline-spanning conspiracy after using a mysterious, virtual-reality headset her brother was sent. With sinister forces from both the future and present closing in, Flynne must find a way to solve a mystery unfolding decades from now, all while protecting her family and (quite possibly) her entire timeline.

Much like Nolan and Joy’s award-winning HBO sci-fi series, Westworld, The Peripheral is a gorgeous show, filled with amazing visual effects and meticulously shot sequences that blur the line between speculative fantasy and gritty reality.

Flynne’s “present day” world is smartly realized by the series, offering a glimpse of the future that feels not too far off from what we imagine life might be like a decade or two over the horizon. The series blends the familiar with slightly enhanced — but still familiar — elements, from the electric bicycles that characters ride to the ubiquity of VR systems, drones, and 3D-printing commerce. This light touch is expertly applied by the series’ directors, which include Cube and Splice director Vincenzo Natali, and makes her world easy to connect with while maintaining a healthy investment in the uncertainty of what else might be out there waiting for her.

The series juxtaposes that semi-familiar future against a far-flung timeline that manages to be both beautiful and terrifying in equal measures. The series’ story has Flynne jumping between what is for her and what could be for humanity and manages to present a fascinating, unique spin on “post-apocalyptic” civilization. Discovering the true nature of that future world is part of the mystery Flynne finds herself immersed in — a mystery wrapped around a series of additional, interconnected mysteries that keep her operating across two very different, but very dangerous, timelines.

It’s a lot to absorb and track, certainly, but it’s in keeping with the complicated but intricately layered narratives of many of the past projects from the Westworld creators. As convoluted as the timeline gets, there’s a sense that the various threads will ultimately find a way to come crashing together, and the series pulls you along as it hurtles toward what will — hopefully — be that revelatory moment.

Playing the series’ lead role, Moretz carries both the action and the expository moments well. Flynne is a quick-thinking survivor who’s easy to cheer for, and Moretz effectively conveys both her intelligence and her humanity as the story unfolds. The series asks a lot of her as the lynchpin of a story told across two very different versions of reality, and she finds the center of the character in both of them.

In a supporting role, Midsommar actor Jack Reynor adds a welcomed amount of depth to his character Burton, Flynne’s brother and a former member of an experimental military task force implanted with high-tech “haptic” implants that left him and the rest of his squad dealing with a unique sort of post-traumatic stress disorder. A character that could have easily been a shallow, ex-military stereotype is built up and built out over the series’ early episodes into a legitimately tragic figure, and Reynor brings a lot of nuance out of the character with his performance.

Portraying Flynne’s contact in the future timeline, Wilf Netherton, Bolden and 21 Bridges actor Gary Carr also pulls a lot of depth out of a character with relatively limited screen time. Carr has good chemistry with Moretz in the scenes they share, and that connection is put to good use in the show.

The Peripheral also does well for itself in the villain department, too. Playing powerful adversaries in two different timelines, Westworld actor Louis Herthum and The Haunting of Bly Manor actress T’Nia Miller are both supremely chilling as crime boss Corbell Pickett and corporate investigator Cherise, respectively. Both actors do an unnerving job with characters whose otherwise calm, cool appearance and approach to their work hides a dark, deep capacity for cruelty and violence.

Sci-fi television and cinema are littered with failed or otherwise abandoned attempts at bringing Gibson’s genre-defining vision of the future to the screen. Although it shouldn’t come as much of a surprise that the creative team behind Westworld plays a big role in one of the best adaptations so far, the scope of the source material and the narrative juggling the series requires makes The Peripheral an impressive achievement.

Smith, the series’ showrunner, does a wonderful job of tracking the various timelines and narrative threads of the show and consistently manages to bring them together whenever the story is in danger of unraveling. It’s not an easy feat with a saga as far-reaching as the one in The Peripheral, but the combination of all that narrative shepherding, the spectacular cinematic vision of the series’ directors, and strong performances from the show’s cast make The Peripheral one of the most entertaining adaptations of Gibson’s work to date.