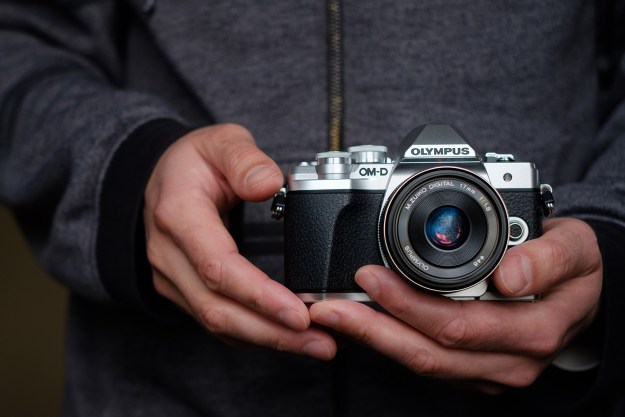 For many photographers, Sony sucks all the oxygen out of the room as far as mirrorless cameras are concerned. Yet Olympus, Panasonic, Fujifilm, and even Canon are fighting to remain relevant in this category, each taking its own approach. Enter the revised Olympus OM-D E-M10 Mark III. At $649 MSRP (body only), it’s a very affordable mirrorless interchangeable lens model. While it may be geared toward entry-level users, it brings with it some high-end features, like 8.6-frames-per-second (fps) burst shooting, 4K video, and ample direct access control. Oh, and we can’t forget about that classic Olympus OM-D styling.

The E-M10 Mark III is available in black or a silver-and-black combination for that extra-retro finish. Like all Olympus OM-D cameras, we quite like the look and feel. Overall, the body is very compact, weighing just 14.5 ounces including the memory card and battery. Even the M.Zuiko 14-150mm kit lens (28-300mm full-frame equivalent) added just 10 ounces, and the 17mm f/1.8 (34mm equivalent) weighs just 4.2 ounces and barely extends from the front plate. (We also tested it with a couple of Olympus’ larger M. Zuiko F1.2 Pro series lenses, but expect most E-M10 owners won’t be picking those up.) This is the greatest advantage of the Micro Four Thirds system, as the smaller sensor allows for smaller lenses, and the E-M10 Mark III really plays to this strength. The other benefit is the sheer number of lenses available for the system, with both Olympus and Panasonic producing their own glass that can be mounted on either brand’s cameras.

The Mark III may strike some users as being quite busy, with loads of buttons and dials and switches. We quite like it, especially as few other cameras at this price point put this much control at your fingertips, but beginners may feel a little overwhelmed. There’s a hot shoe, mode dial, two command wheels, shutter button, and movie record button. There are also two customizable Function keys.

The back has a high-quality 2.36-million-dot OLED electronic viewfinder with diopter control. Below is a tilting 3-inch touchscreen rated at 1.04 million dots. The EVF is about as good as it gets and the monitor is solid, although nothing special. The touchscreen is responsive and a welcome feature.

The battery is rated for 330 shots, typical for small mirrorless cameras but less than half of almost any DSLR.

The OM-D E-M10 Mark III features the venerable, if a bit outdated, 16-megapixel Micro Four Thirds (MFT) sensor coupled to the TruePic VIII processor. As we mentioned, MFT chips are smaller than the typical APS-C sensors found in Sony, Fujifilm, and Canon mirrorless cameras. For novice and hobby shooters, this likely isn’t a huge issue, but if you’re looking for the best image quality, you will find it elsewhere. We would have liked to have seen the E-M10 Mark III inherit the newer 20MP sensor used in the flagship E-M1 Mark II, although the 16MP chipset shouldn’t be a deal breaker for the target user.

Autofocus points have increased to 121, up from 81 in the E-M10 Mark II. Although the AF system works well for static subjects, action is not its forte. The camera can shoot continuously at 8.6 fps, but only with focus locked after the first frame. If you want continuous AF, it tops out at just 4.8 fps, so a sports camera this is not. As a contrast-detection-only system, it also falls behind other modern mirrorless AF systems that use a combination of phase and contrast detection.

Where the camera really starts to show its weakness is when combining both action and low-light photography.

Where the camera really starts to show its weakness is when combining both action and low-light photography. When we tried to shoot folk dancers on stage at night, it did a very poor job. Here, we couldn’t rely on the great five-axis image stabilization to get a clean shot, as we needed a fast shutter speed to freeze the action. That meant raising the ISO, which quickly leads to unacceptable levels of noise given the relatively small MFT sensor. AF performance, already not particularly good for moving subjects, suffers even more in reduced light, giving us another issue. We know this is a tough situation for any camera, but it’s hard not to feel a bit let down by the Mark III. We weren’t expecting the quality of a $5,000 full-frame rig like a Sony A7R Mark III with an f/2.8 lens, but it was still disappointing.

In brighter, more static settings, the Mark III does a good job with nice colors and quick focusing. So long as you don’t have a moving subject, the five-axis image stabilization eliminates blur when shooting handheld at slow shutter speeds.

As for video, the jump to 4K is welcome if not surprising. This is definitely the new normal, and we’re glad to see Olympus is implementing the higher-resolution standard throughout its product lineup. Color quality was quite good and we didn’t notice too much rolling shutter or artifacts. However, video also suffered from the poor continuous AF performance, which failed to keep pace with moving subjects. Granted, we’ve been spoiled by faster hybrid AF systems in cameras costing six-times the price of the E-M10 Mark III, but its focus performance is still in another universe. Even at a similar price point, Canon’s Dual Pixel AF in the EOS M6 is far superior — although that camera goes without 4K video and also lacks an EVF.

Olympus offers a one-year limited warranty on all digital cameras.

Call us underwhelmed. The Mark III is a good camera for stills, but suffers when it comes to fast-moving action and video, mainly due to less-than-stellar autofocus performance. The contrast detect system simply can’t keep up with the competition. That said, for more casual scenarios, the camera performs adequately and offers a great user experience with plenty of control and features not usually found at this price point. It probably isn’t a must-have upgrade for current E-M10 Mark II owners, but for beginner photographers looking for a good first interchangeable lens camera, it’s certainly not a bad choice.

And that’s really Olympus’ strategy with the Mark III: It knows it won’t attract advanced users, but it’s hoping it would sway smartphone users toward its direction, and maybe, toward a higher-end OM-D in the future.

The comparably priced Sony A6000 ($549, body only) has a 24MP APS-C sensor, 11-fps continuous shooting, and hybrid AF. Being an older model, it does not capture 4K video, nor does it have internal stabilization (unlike the newer Sony A6500). It’s the same story with the Canon mirrorless EOS M6 ($679, body only), which also uses a 24MP APS-C sensor. None of these alternatives can best the Olympus in size (at least when a comparable lens is equipped), nor, in our opinion, on style, but they are all fairly compact and well-made cameras. (Read more about our favorite mirrorless cameras.)

We expect another refresh to the E-M10 line in a couple of years. The camera is not weather-sealed like the E-M5 and E-M1-series, but it still feels built to last. Treat it right, and it should keep on clicking for a long time to come.

The Olympus OM-D E-M10 Mark III is a good option for beginners and hobbyists, given the compact size, fair price, and broad selection of lenses. Action photographers and videographers should pass on this one, but casual users should be happy.

The best camera phones for 2022
World’s smallest .56-micron pixel heralds the end of camera bumps
DJI Mavic 3 roars to the scene with dual-cam Hasselblad camera
ISS astronaut reveals how he captures stunning Earth photos
Netflix sheds light on its ‘approved cameras’ for filmmakers
Best Prime Day Drone Deals 2022: What to expect this week
How to remove the background from an image
Instagram boss says to expect even more video content
6 awesome Earth images captured from the ISS in July
This GoPro Hero 10 bundle is $100 off at Best Buy today
The best iPhone tripods for 2022
Watch this Mavic 3 drone soar above the world’s highest mountain
How to watch DJI unveil an all-new drone today