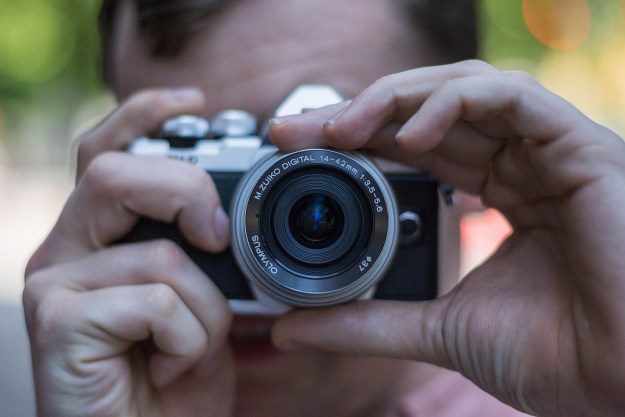 “Olympus’ E-M10 II is the perfect starter camera for going mirrorless, or a worthwhile upgrade.”

The Olympus OM-D series of Micro Four Thirds mirrorless interchangeable lens cameras (ILC) have consistently won plaudits from Digital Trends. This includes the recommended E-M10 ($550, body only), an affordable, high-end camera designed for anyone new to ILCs or who wants to upgrade an old model. Olympus now has a sequel , and while it doesn’t break new ground, what’s more important is that it’s a very capable camera.

Retro is an often-used word to describe modern camera design, and there’s no question the Mark II looks like something out of the 1970s – especially in the two-tone black-and-silver styling of our review model (it’s also available in all-black and a limited edition in brown leather). Design wise, like its predecessor, beauty is in the eye of the beholder, but we would argue that Olympus makes some of the better-looking cameras. In the high-end OM-D series, the E-M10 II is the affordable one, but this sequel gets a redesigned control layout; all of the large knurled dials are to the right of the pop-up flash, while the left has an old-style on/off lever. The dials are big enough for making adjustments just by touch, which is handy when you’re looking through the electronic viewfinder (EVF).

Speaking of the EVF, it’s been improved to a 2.3-million-pixel OLED screen with superior contrast and smoother images, versus the 1.44 million for first E-M10. If you would rather frame your shots with the tilting 3-inch touchscreen LCD, you get a 1.04-million-pixel resolution – not best in class, but still solid.

Of course, the camera uses the Micro Four Thirds mount and we’ve been impressed with Olympus’ M.Zuiko lenses over the years. Besides Olympus, there are plenty of other everyday options available, including those from third-party makers, like Sigma.

Olympus may not have broken any barriers with this upgrade but it’s a very fine camera nonetheless.

The camera is compact (4.7 x 3.3 1.9 inches, without lens) and even though it is an ILC, it’s very lightweight, tipping the scales at 14 ounces with battery and card. Adding the compact kit lens ($600) doesn’t make the entire package that much heavier, so it is easy to carry all day. The 14-42mm f/3.5-f/5.6 M.Zuiko pancake lens has a 2x Micro Four Thirds digital factor, so the tiny zoom has a range of 28-84mm in 35mm terms. The same multiplier holds true for any glass you purchase.

In keeping with a DSLR feel, the E-M10 II has all those dials we mentioned plus lots of function keys you can customize. There are two function keys on the top-deck along with a third on the back. The top definitely looks busy with all the buttons and dials, as well as the stereo mics, pop-up flash, and hot shoe. If you are new to Olympus, reviewing the owner’s manual to get a quick lay of the land would be an excellent idea. For example, you wouldn’t know the Function 2 button accesses hue and shadow control by default. The capabilities of the E-M10 II are really sophisticated so definitely give the instructions a read.

The back has the tilting 3-inch touchscreen LCD, the EVF with diopter control, a nice large thumb rest, and a tiny mono speaker. There are also the classic buttons (Menu, Info, Delete, Playback) surrounding a four-way controller with center OK key. The right side has a compartment with USB and A/V connections, while the bottom has the battery/SD card compartment. The battery is rated for 320 shots, so you’re good for a full day’s shooting.

The O-MD E-M10 II kit comes with the body and 14-42mm f/3.5-f/5.6 M.Zuiko pancake lens. Also in the box is a battery, charger with AC cord, USB cable, strap, and caps. Olympus supplies a very basic 30-page starter manual; the full version is on the included CD, which also has Olympus Viewer 3 software for handling images and developing RAW files. The camera has built-in Wi-Fi so also download the Olympus Image Share app for iOS or Android.

The E-M10 II features a trusty 16.1-megapixel Micro Four Thirds chip coupled to the TruePic VII processor. This is a staple in the Olympus lineup and has delivered quality photos for years. It’s the same setup as the original E-M10 although it’s been tweaked to improve the frame rate to 8.5 frames per second, from 8 fps. This is hardly an earth-shattering change (more on this later), but what’s more important is that this is a very responsive camera that focuses very quickly, thanks to an 81-area multiple AF system.

We used the Mark II in a variety of locales and really enjoyed using it. The quality of the stills is quite good with saturated colors and solid accuracy. This means blue skies were the blue we experienced, red flowers looked lifelike, and so on. If you want to alter your senses without using illegal drugs, the E-M10 II has the creative effects to enhance your photos; we’ve always been partial to Dramatic Tone but there are 13 other Art Filters as well.

One new feature is the aforementioned built-in 5-axis image stabilization, rather than the 3-axis of the previous model. We found it to be helpful when shooting scenes from a bouncing boat to standing on solid ground. In-body IS is an excellent addition, as any lens you attached gets the benefit – even older Olympus Four Thirds DSLR lenses.

As we said, the E-M10 II is very responsive and you can grab bursts of 8.5 fps. But it drops to 4 fps with Continuous AF. Still, we had no problems with photographing speedy boats and jet skiers. The camera has a top shutter speed of 1/ 4,000th of a second and the mechanism is quite noisy as you’re shooting bursts. Fortunately, Olympus offers a silent mode if you want to be more discreet. Top speed with the electronic shutter is 1/ 16,000th of a second.

While the E-M10 II does a fine job with stills, its video chops are good. Overall, the quality is eye pleasing with accurate colors and fast focusing. We were able to capture a nice view of a lake as we sped along helped in major part by the 5-axis IS. The maximum resolution is Full HD 1080/60p, however. Depending on whom you ask, this is either fine or behind the times. For today’s viewing, Full HD is more than acceptable, but clips are prone to jelly effects when quickly panning. More cameras are now offering 4K video capture, which is a higher-quality resolution that you can scale down to nicer Full HD videos or future-proof for your next TV. We’re sure 4K will be part of the next generation of O-MD cameras, but, for now, it’s not onboard.

The camera has a native ISO range of 200-25,600 but it can be extended down to 100. Many newer mirrorless cameras hit 51,200, but this is really a marketing tool as images captured at such high settings are pixelated messes with dramatic color shifts. We wouldn’t even use the maximum 25,600 setting with the E-M10 II but we’d feel comfortable at ISO 4,000, even 6,400 if we didn’t intend to enlarge the photos too radically. All told, you should get nice photos using a solid, wide-open lens (low aperture numbers) without a flash.

The camera has built-in Wi-Fi and pairing a Samsung Galaxy S5, loaded with the Olympus Image Share app, was effortless. Olympus uses a QR code process, which pops up on the camera LCD and you scan it with the smartphone app. The software provides the basics such as remote control of the camera, adding geotags, image editing, and, of course, sending shots to your smartphone. Compared to early generations, camera companies have finally improved wireless connectivity in modern models.

We can easily recommend the E-M10 II for those looking to make the move to an affordable ILC or those with older cameras looking to upgrade. For only $50 more, spring for the kit lens version if this is your first Olympus ILC. It may not have every shiny new spec for 2016 (think 4K or hybrid AF) but it really covers all the other bases, and that’s what you’d want in a new camera . We’d love to see higher-quality video but Full HD 1080/60p is nothing to sneeze at. With that said, you should also look at Sony’s A6000, a comparable mirrorless model that’s practically the same price yet has a larger APS-C sensor (24.3MP). Unless you’re printing huge enlargements, this is not the sole reason to choose one over the other. We like the more DSLR-feel of the E-M10 II over the A6000, for example. Olympus may not have broken any barriers with this upgrade but it’s a very fine camera nonetheless.

Fujifilm’s GFX 50S II is the cheapest medium-format camera ever
The best point-and-shoot cameras
Olympus sells its imaging division in attempt to save its cameras
The Nikon Z 7 II and Z 6 II are coming October 14: Here’s what we want to see
How to clean up and organize your photos
This MagSafe iPhone rig aims to give your videos a more pro look
Nikon’s new 800mm lens for Z-mount cameras lightens the load
ReelSteady makes GoPro Player ‘reel’ useful for filmmakers
GoPro takes to the skies with the Hero10 Black Bones
How to turn off the camera sound on an iPhone
24 amazing images of our planet for Earth Day
Instagram test lets you pin particular posts to your profile
Snapchat’s pocket-sized Pixy drone takes to the skies