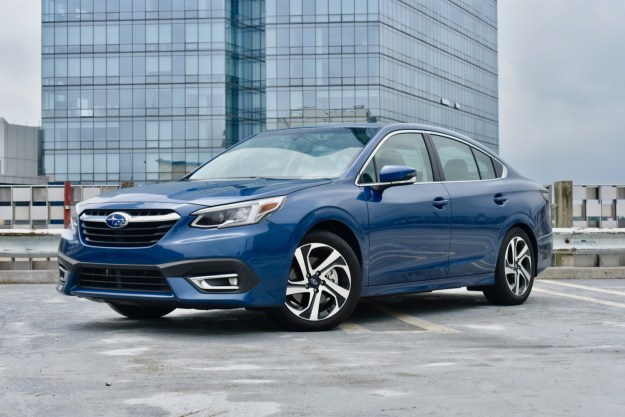 The Subaru Legacy has always done things differently than other midsize sedans, offering all-wheel drive and unorthodox boxer engines to distinguish itself from the cookie-cutter competition. While the Honda Accord and Toyota Camry have dominated the market for decades, the Legacy has built up a small but loyal following, mostly in the Subaru strongholds of the Northeast and Northwest.

With the redesigned 2020 Legacy, however, Subaru is looking to break out of its niche and challenge other midsize sedans head-on.

As with its Outback sibling, the standout new features of the 2020 Subaru Legacy are an available 11.6-inch touchscreen and turbocharged four-cylinder engine — evoking sporty turbo Legacy models of the 2000s and 2010s. Our Legacy Limited XT test car had both items, as well as a sticker price of $35,095, compared to $23,645 for a base Legacy.

Style is subjective, but looking at the 2020 Legacy’s exterior, it’s clear that Subaru had other priorities. Nothing about the design is different or groundbreaking and, despite being a new generation of Legacy, the 2020 model looks similar to its predecessor. The 2020 Legacy is slightly longer, taller, and wider than the 2019 model, but with an identical wheelbase.

Under the skin, the Legacy rides on the same Subaru Global Platform as the automaker’s other recent models, like the Crosstrek and Ascent. Subaru claims the 2020 Legacy is 70% stiffer in torsional rigidity than its predecessor, which helps improve handling and gives the car a more solid feel. Subaru also claims the 2020 Legacy can absorb more than 40% more energy in front and side impacts.

Many screens seem like a waste of space, but Subaru did things right.

Typical for Subaru, the interior is simple but laid out well. Our Limited test car (one step below the top Touring trim level) had leather seats that were fairly comfortable, but could have used firmer cushioning. Subaru also threw in lots of shiny black plastic and fake chrome trim, which produced significant glare in direct sunlight, and looked like it would scratch easily.

The Legacy has more Environmental Protection Agency-rated passenger volume than top competitors like the Honda Accord, Hyundai Sonata, Nissan Altima, Toyota Camry, and Volkswagen Passat. However, headroom and legroom in both rows are only average. At 15.1 cubic feet, trunk space is a bit below average.

The 2020 Legacy gets the same 11.6-inch portrait-oriented touchscreen as the Outback. The screen is standard on all Legacy trim levels except the base model (which gets a 7.0-inch touchscreen), while Apple CarPlay and Android Auto are standard across the board. The Legacy also gets a built-in Wi-Fi hot spot for the first time.

Big screens are all the rage these days, but most automakers seem to be prioritizing form over function. While many of these screens seem like a waste of space, Subaru did things right. As in the Outback, the icons are big and easier to read while driving. Icons for climate control are also placed at the bottom of the screen — where analog knobs and buttons would normally be — and Subaru included an all-important volume knob. However, at one point the audio system stopped working, a problem we didn’t encounter on an Outback with the same head unit. It was remedied by restarting the car.

The 2020 Legacy also gets Subaru’s EyeSight suite of driver aids, which uses forward-facing cameras mounted near the rearview mirror, rather than the radar units used by most other automakers. Adaptive cruise control with lane centering is standard, while blind spot monitoring, lane change assist, and rear cross traffic alert are optional extras. That’s comparable to the standard bundle of driver aids on the Honda Accord, Hyundai Sonata, and Toyota Camry.

EyeSight has an advantage over competitor systems: Tech that ensures it won’t be used irresponsibly.

As with the Outback, EyeSight adaptive cruise control maintained a steady pace with ease, but was slow to react when cars cut in abruptly. The lane-centering feature’s performance was worse, however, showing a tendency to pull to one side like the car needed a wheel alignment. It also let the car drift out of its lane a couple of times. An Outback test car didn’t have these problems on the same stretch of road. Given how similar the two models are (the Outback is essentially a Legacy station wagon), the lack of consistency was troubling.

Nonetheless, EyeSight still has an advantage over competitor systems: Tech that ensures it won’t be used irresponsibly. Subaru is one of a handful of automakers (along with BMW and Cadillac) to use a driver-facing camera to monitor for distraction. The DriverFocus system, which debuted in the Forester, sends audio and visual alerts if drivers take their eyes off the road. As in other Subarus, DriverFocus did its job unobtrusively in the Legacy, with no false alarms.

The 2020 Legacy continues Subaru’s use of its trademark “boxer” engines, which sit lower in the chassis than other engine configurations, helping to lower the car’s center of gravity. The base 2.5-liter four-cylinder engine carries over from the 2019 model year, but now makes 182 horsepower and 176 pound-feet of torque, up from 175 hp and 174 lb-ft before. All Legacy models get standard all-wheel drive and a continuously variable transmission (CVT).

XT models get a more powerful 2.4-liter turbocharged four-cylinder engine. Shared with the Outback and Ascent, it makes 260 hp and 277 lb-ft of torque. That’s more than the 3.6-liter boxer-six this engine replaces, as well as the optional turbocharged engines in the Honda Accord and Nissan Altima. The Toyota Camry’s 3.5-liter naturally aspirated V6 makes more horsepower (301 hp) but less torque (267 lb-ft).

The Legacy also beats the Hyundai Sonata in power output, although Hyundai is preparing a sporty N-Line model with a 2.5-liter turbo-four making 290 hp and 310 lb-ft. That engine is already available in the 2021 Kia K5 GT.

The turbocharged engine makes a lot of power for an ordinary family sedan.

Regardless of the competition, the turbocharged engine makes a lot of power for an ordinary family sedan, so it’s easy to think of the Legacy XT as a bigger sibling to the Subaru WRX. That’s not the case though. This Legacy is decently quick (zero to 60 mph in 6.1 seconds, according to Subaru), but nothing else about it is sporty. The suspension is tuned for comfort, not handling, a reasonable decision given how most midsize sedans are actually used. The Honda Accord and Mazda 6 remain the better choices for driving enthusiasts.

The CVT also sabotages the engine with uneven power delivery. As in the Outback, the engine and transmission just don’t seem to be on the same page. The jerky acceleration feels like riding with a novice learning to drive stick. This car demands a different transmission, or at least a retuning of the CVT. That would turn a good car into a great one.

The Legacy offers slightly better combined and city fuel economy than a 2.0-liter turbo Honda Accord, but the Honda gets the same 32 mpg highway. The Nissan Altima is rated at 29 mpg combined (25 mpg city, 34 mpg highway) with its optional turbo engine, which uses variable compression to wring out extra mpg. The Accord, Hyundai Sonata, and Toyota Camry are also available with hybrid powertrains, while the Legacy isn’t.

The 2020 Legacy received the highest Top Safety Pick+ rating from the Insurance Institute for Highway Safety, as well as a five-star overall rating from the National Highway Traffic Safety Administration — the federal agency’s highest safety rating.

Subaru offers a three-year, 36,000-mile, basic warranty and a five-year, 60,000-mile, powertrain warranty. That’s about average for a mainstream brand, although Hyundai and Kia offer longer warranty terms. Subaru also has an excellent reputation for reliability.

The Limited XT trim level tested here seems to be the sweet spot of the 2020 Legacy lineup. It gets the turbocharged engine, which is worth the extra money over a base engine that has not impressed in other recent Subaru vehicles. The Limited is also the lowest trim level to get the DriverFocus camera system, albeit only as part of an options package that also includes navigation, a power moonroof, and a heated steering wheel.

At the same time, it doesn’t seem worth upgrading to the top Touring trim level. The only features it adds are a front-view camera and Nappa leather seats. The Limited already comes with leather seats, albeit of ostensibly lower-grade material.

It’s unclear how much aftermarket support the 2020 Legacy will get, but this seems like a car with potential. Subaru is unlikely to offer a new version of the old Legacy 2.5GT Spec.B performance model, but it would be great to see one of these cars with stickier tires, bigger brakes, and upgraded suspension to match its turbocharged power.

The 2020 Subaru Legacy continues to stand out from the crowd. The optional turbocharged engine gives this new model some-much needed oomph, and all-wheel drive traction remains an asset in snowy climates. Add to that EyeSight and DriverFocus tech, as well as one of the best-integrated touchscreens in the business, and the Legacy should appeal to more than just traditional Subaru fans.

The Legacy isn’t perfect. The Honda Accord and Mazda 6 are better driver’s cars, and the Hyundai Sonata boasts its own clever tech in the form of the Smart Parking Assist self-parking feature. The Nissan Altima does a better job of balancing turbocharged power with good gas mileage, and the Accord, Sonata, and Toyota Camry are all available with hybrid powertrains for even better mpg.

Still, the Legacy covers all of the bases and, with its standard all-wheel drive, provides a little extra insurance for bad weather.

Yes. With all-wheel drive and plenty of tech, the Legacy is a great alternative to the midsize sedan mainstays.