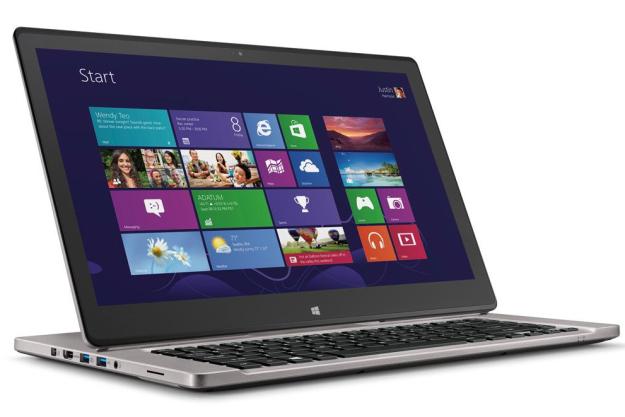 “Combining three products in one, the Acer Aspire R7's innovative hinge design, gorgeous display, and solid build quality make it one of the best and most versatile hybrid devices to date.”

Touchscreen computers of all flavors suffer from a notable ergonomic problem: reach. A traditional computer, unlike a tablet, is always used with input peripherals, and that means the screen is often kept beyond arm’s reach. Simply slapping on a touchscreen, without addressing the problem of reach, forces users to sit hunched in front of their PCs with arms awkwardly stretched forward. Many will simply give up and go back to using the touchpad or an external mouse.

All the hybrid computers we’ve reviewed so far have addressed this issue by letting users turn their PC into a tablet. Though it solves the problem, it also introduces a host of new user input issues and reduces functionality. These trade-offs are just as frustrating for those who want to use their PC as a PC and not an iPad that runs Windows.

This is the kind of computer you could use as a weapon in the event of a zombie apocalypse.

Acer thinks it has the solution with its new hybrid, the Acer Aspire R7. Announced just weeks ago, this computer spans categories by combining a desktop all-in-one, a traditional laptop, and a Windows tablet into one package. Better still, Acer isn’t asking an absurd premium. Our review unit, a base model which boasts a Core i5 processor and 1080p display, has an MSRP of $999.

An Ultrabook sold at this price with the R7’s specifications would seem a good buy, and the fact that this is a unique design makes the on-paper value seem better still. Let’s see if reality lives up to the hype.

Taking the Aspire R7 out of its packaging for the first time is an unusual experience. Because it can be used as a tablet, there’s an expectation that the R7 will be small, like the company’s own Iconia W700 tablet/all-in-one. But this hybrid’s DNA derives from the desktop replacement laptop, not tablets and ultraportables, which means it packs a 15.6-inch display and weighs over five pounds.

The Ezel hinge, which articulates both at its attachment to the base and its attachment to the display, enables the hybrid’s many uses. This type of design can easily feel cheap, so Acer wound the joints tightly and added a grippy coat around the display bezel. Both features keep the screen where the user places it, but also make the display difficult to move – expect to use two hands when adjusting the hinge.

Acer uses an aluminum unibody to construct the system’s lower half, and the benefits are obvious. This is the kind of computer you could use as a weapon in the event of a zombie apocalypse.

A little blood wouldn’t mar the laptop’s looks, either, as it’s a somber affair. The gunmetal aluminum will probably stand up well to the test of time, but its dull finish doesn’t inspire passion or excitement.

A look around this hybrid’s flanks will reveal three USB ports (two 3.0), HDMI, DisplayPort, and a combo headphone/microphone jack. This is an average selection of connectivity for a system sold at this price.

Also included is the Acer Converter Port, which can be used with add-on accessories to enable additional connectivity, such as VGA. That’s better than nothing, though we think it’d be more useful to have that port replaced with ThunderBolt or even DisplayPort.

The touchpad takes a back seat

Acer designed the unusual Ezel hinge to make the R7 usable with the display close to the user or reclined in a traditional laptop orientation. As a result, Acer switched the position of the touchpad and keyboard. That’s right; from the user’s perspective, the touchpad is above the keys.

Did you just feel your knee jerk? We don’t blame you. But, having used the device, we understand why Acer made this choice. The touchpad exists only to offer legacy support for software that simply doesn’t work with a touchscreen. Otherwise, the R7 is designed for use with the display in the forward position, and the system is much more pleasing to use for touch input as a result.

The focus on touch doesn’t mean the keyboard has been slighted, however. Instead of trying to cram in a numpad, Acer has axed it in favor of a simple, spacious layout. Many laptops claim to have keyboards of similar size to a desktop, but the R7 actually delivers on that promise. Backlighting is standard, too, and there are two brightness settings (besides off) available.

Barely a tablet, but the display is beautiful

Reclining the Ezel hinge entirely puts the device into what Acer calls “pad” mode. The use of “pad” rather than “tablet” is telling, because in this mode the display does not entirely recline but instead remains at a slight angle.

The R7 can be used like a tablet despite this, but the hinge gives “pad” mode an effective thickness of around three inches and adds even more bulk to the already chunky design. Using this system as a tablet is doable, but don’t think for a second that this is an iPad replacement. This is only a good-enough solution for people who don’t want to buy numerous devices but still want a couchable touchscreen.

And what a screen it is. In our tests, the display managed to render 97 percent of the sRGB gamut while also posting deep black levels, high contrast, and brightness just over 300 nits. This results blow away most Ultrabooks and Windows tablets and rival the best all-in-one desktop PCs. Better still, the display’s 1080p resolution is a very good fit for the 15.6-inch display area. It’s high enough to provide sharpness, yet keeps scaling problems to a minimum.

Audio quality is another high point thanks to a pair of speakers that provide good clarity across a broad range of volume. At its loudest, the R7 is actually too loud for a quiet room, and bass is reproduced with a hint of punch. The only problem is sound staging. Like almost all laptops and all-in-ones, this system can’t produce convincing surround sound.

Our review unit arrived with a Core i5-3337U processor clocked at 1.8 GHz, a part commonly found in devices ranging from laptops to desktop all-in-ones. We weren’t surprised to see it reach a respectable SiSoft Sandra score of 39.2 GOPS and a 7-Zip score of 7,494 MIPS. These figures are competitive with other systems in the price range and can even match far more expensive options like the Dell XPS 18 and Lenovo IdeaCentre Horizon.

… Perhaps the company’s boldest move to date – and among the most successful.

However, total system performance took a slight hit. The R7 scored 3,537 in our PCMark 7 test, which isn’t necessarily a bad score; it’s just not a great score. The slow mechanical hard drive is no doubt the culprit. Subjectively, we felt this downside manifest itself when opening some software. Load times were a bit delayed relative to Windows systems that use solid-state storage exclusively.

3D performance, provided by Intel HD 4000 integrated graphics, proved a weak point. In our tests, the Aspire R7 managed a score of just 3,749 in the Cloud Gate test and 510 in the Fire Strike test. These are dead-on with the average among systems with this graphics solution but also represent a computer that can’t handle modern games at high resolution and detail settings.

Not the perfect travel companion

Though certainly more portable than Dell’s mammoth XPS 18, the Acer Aspire R7 is a large device that’s obviously not built with long-distance travel in mind. Its relatively chunky design and five-pound weight make for a hybrid that can fit in most backpacks but is difficult to use in tight quarters.

Users who attempt to travel with the R7 will find its battery isn’t up to the task. It lasted just five hours and 33 minutes in our light-load reader’s test, a figure reduced to just over two hours under heavy load in the Battery Eater test. Web browsing put endurance at barely over four hours.

Our power tests actually left us impressed that the small 4-cell battery managed to last as long as it did. We found the hybrid consumes about 16 watts at idle and up to 41 watts at full load, which is a lot for a mainstream laptop. An average 13-inch Ultrabook, for example, consumes around 10 watts at idle and no more than 30 watts at load.

The unique design of the R7 could have caused a cooling disaster, but Acer’s engineers were on top of the problem. Our IR thermometer never read an external temperature higher than 97.3 degrees Fahrenheit, and temperatures hover around 86 degrees at idle or near idle. These are competitive figures relative to laptops of similar size, and are great figures relative to the Ultrabook category.

And don’t think the cooling system works just by cranking the system fan to max. Our decibel reader never recorded more than 42.4 decibels from the system, a figure that’s lower than many all-in-one desktop computers. The fan is barely audible when the system is at idle.

In December 2011, Acer’s CEO, J.T. Wang had an epiphany. He told Dow Jones that his company would switch its strategy to improving profitability and stop “pursuing market share blindly.” The results of this decision became apparent within months, and now, a year and a half later, Acer has matured. Once known as a company that builds bland, boring boxes, Acer has become a serious competitor in the hybrid and Ultrabook segments.

The Acer Aspire R7 is a powerful, versatile hybrid with a beautiful display and a low price.

Acer’s Aspire R7 is perhaps the company’s boldest move to date – and among the most successful. The double-jointed hinge and unusual touchpad position take some getting used to, yet also make this a true hybrid device. It’s a laptop, all-in-one PC, and tablet all wrapped into one.

But this hybrid’s true strength lies in execution rather than theory. The R7 is competitive with similar devices in every area – from performance to build quality – and some features (like the display) are among the best available. Even the system’s weakest point, portability, is competitive with other 15.6-inch computers.

And then there’s the price. Acer will be selling the exact model we reviewed at retail for $999, which seems almost too good to be true. Most hybrids and Ultrabooks with similar hardware sell for much, much more.

Overall, the Acer Aspire R7 is a powerful, versatile hybrid with a beautiful display and a low price. There’s no competitor today that offers more for less.