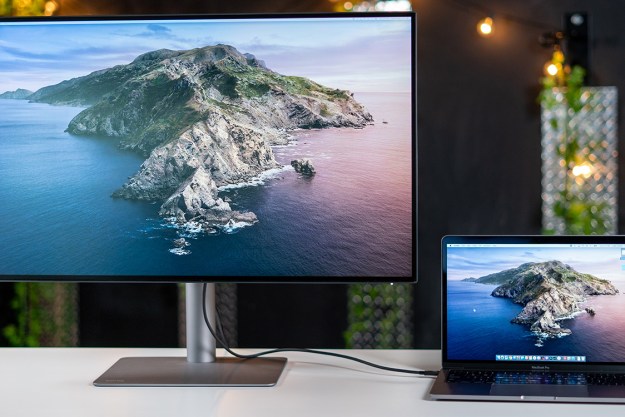 If you’re a photographer, videographer, or designer, chances are you’re using a MacBook. But finding a proper 4K monitor to match the MacBook’s display isn’t easy. Apple’s own monitor selection is limited to the forthcoming $5,000 Pro Display XDR, and expensive 4K displays don’t display colors the same way.

BenQ has built the PD3220U to solve it. From its image quality to its physical design, the PD3220U would look great next to your MacBook Pro. But at $1,200, does the price of this 4K monitor match the value?

It’s Space Grey, but is it Apple-worthy?

BenQ says the PD3220U was designed with the MacBook in mind. I’ll talk about what that means for image quality later, but on looks alone, the similarity is obvious. Its color isn’t explicitly called “Space Grey,” but it may as well be. The stand, base, and cabinet are all minimalist. The only branding is a small BenQ logo in the corner of the base.

The base is made of aluminum, while the stand and cabinet are plastic to allow for impressive adjustability. The PD3220U can tilt, swivel, and pivot a full 90 degrees for use in vertical orientation. Height adjustment is just shy of six inches, which matches the PD3200U and gives plenty of options of arrangement on your desk. The Dell UltraSharp U3219Q matches it in adjustability. LG’s 32UD99-W comes close, but it can’t pivot for the alternate orientation.

Setting up the PD3220U was easy. No screws are necessary thanks to a button mechanism that attaches the stand to the screen. It is, however, a heavy monitor at 23 pounds (including the stand and base). Cheaper 32-inch BenQ monitors such as the EW3227U are considerably lighter, though the older PD3200U was around five pounds heavier.

The color isn’t officially called “Space Grey,” but it may as well be.

The PD3220U might seem slim from the front with its thin bezels and stand, but in profile it isn’t as sleek. The back of the cabinet is thick and clunky compared to the ultra-thin monitors coming from Dell and HP. Those consumer-friendly models are built for a different audience, but it’s hard to not notice the PD3220U’s extra bulk next to the PD3200U or the Dell UltraSharp 3219Q

There are two speakers built-in, but they’re not much use. Listening to music through a tin can is no fun, and that’s what you get here. Some monitors don’t have speakers at all, so it’s hard to criticize the PD3220U too much.

The PD3220U includes every port you could want. That’s good news for the creative professionals this monitor is intended for. Along the back you get two HDMI 2.0 ports, DisplayPort, two USB-A 3.1 ports, a microUSB port, and two USB-C Thunderbolt 3 ports. That effectively turns your monitor into a USB hub.

Those two Thunderbolt 3 ports are great additions, allowing for video passthrough and power delivery up to 45 watts. Plugging in your MacBook Pro through USB-C is the only cord you need on your desk. However, these down-firing ports are difficult to reach, which makes connecting and disconnecting a device awkward.

Along the right side of the screen are a few downstream ports. Data transfer is supported by USB-A 3.1 ports, one USB-C 3.1, and a headphone jack.

In keeping with the design of the monitor, the menu system is also simple. Under the bottom right corner of the screen is a four-direction joystick, two quick selection buttons, and a power button. The left quick selection button gives you quick access to color mode swapping, while the right button brings up inputs.

In keeping with the design of the monitor, the menu system is simple.

A click of the joystick offers quick access to brightness control, which is convenient. From there, you can jump into the deeper menus, which include numerous color modes like Display P3, DCIP-3, sRGB, Adobe RGB, M-book, no Blue Light mode, and more. “M-book” is explicitly for connecting to a MacBook, while the others will depend on the color space you’re working in.

This menu also provides access to common settings like speaker volume, contrast, and sharpness. It’s all simple to navigate which is a big win in my book.

Which mode to use?

It’s no surprise the BenQ PD3220U has stellar image quality across the board. The 3,840 x 2,160 resolution IPS display is incredibly sharp, and at 31.5 inches, it’s large enough to justify the pixel count. It’s a matte display, of course, which is great for detailed creative work.

The experience does depend, however, on what color mode you use. The default mode is Display P3, which is based on Apple’s own color space, the one used on all Apple devices, including iPhones and MacBooks. In othe words, it’s meant to closely resemble the color temperature of MacBook screens, which just so happens to be where a lot of people edit photos. Despite having incredibly accurate screens, MacBooks typically have a cooler tint to them. That’s replicated in Display P3. It’s not identical, but it’s as close to matching a MacBook screen as we’ve seen on an external monitor this large. For some people, that alone sells this monitor.

The Display P3 color mode turns out to be a bit of a strange choice as default, though. As I noticed right away, it’s not the best example of the monitor’s capabilities. You won’t want to browse the web or watch movies in this mode because it offers only a 480:1 contrast ratio and a brightness cap of just 190 nits. It just looks dull. However, for photography and videography, the precise color accuracy and wide color gamut in this color mode is excellent. We recorded an average color error of 1.14, which is quite strong (lower is better in this test), and the display rendered 87% of the AdobeRGB gamut. Monitors that target standard consumer use usually handle only 70 to 80% of AdobeRGB. It’s clear what this monitor was made for.

Display P3 wasn’t made for monitors originally, however, which is why BenQ has smartly includes some other modes as well. Adobe RGB mode, for example, is also a good choice. The PD3220U maxes out at 312 nits in Adobe RGB mode and has up to an 850:1 contrast ratio. That doesn’t beat the HP DreamColor Z27X G2 Studio or the LG 32UC99-W, but it offers less washed-out colors.

The most useful, however, is a mode called M-book. According to the company, it features very similar color reproduction to Display P3, except with a tweaked white point to make images appear better on displays. The result is a very enjoyable viewing experience with the same great colors, except with more adequate brightness and contrast. This is the one I found myself coming back to.

While these different modes are a little confusing, BenQ is depending on its customers to know what they’re doing. Because this is a professional-grade monitor, that feels appropriate.

This isn’t a monitor for gaming. It’s fine to do on the side, but the 60Hz refresh rate and lack of adaptive sync limit its gaming abilities.

I did try calibrating the monitor in Display P3 mode with our Spyder5Elite colorimeter. It didn’t, however, provide much help. This monitor comes factory-calibrated and it looks great out of the box – if you pick Adobe RGB mode.

The PD3220U is built for creative professionals who need precise, accurate colors. The $1,200 price point, as well as the numerous color modes, make that much clear. It’s expensive, but the MacBook-specific color mode makes it a must-have for Apple-oriented creators.

There’s plenty of 4K monitors out there, and many of them are half the price of the BenQ PD3220U. Even its predecessor, the BenQ PD3200U, is less expensive. Despite it not having a Thunderbolt 3 port or the MacBook-specific color mode, it’s the better option for most people.

The same goes for options such as the LG 32UD99-W or the Dell UltraSharp 32 4K USB-C Monitor U3219Q, both of which are hundreds of dollars less. They lack the MacBook-specific color mode but provide the excellent image quality many people are looking for at a cheaper cost.

The BenQ PD3220U should last you many, many years. The ports are varied and futureproof, and the stand and base feel sturdy. The monitor comes with a three-year standard limited warranty, which is true of all Ben-Q monitors.

Yes. You should buy the PD3220U if you need the MacBook-specific color mode that the success of your work depends on. It’s not for Windows users – they have more options – but dedicated Mac fans should give the PD3220U serious consideration.