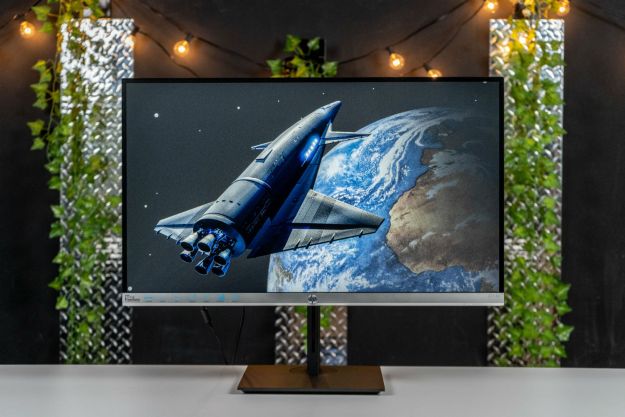 “The HP 27f 4K offers decent image quality, but it's missing a few key features to hold it back from greatness.”

One is for the person who wants the best pixel-per-dollar value they can get. The average person easily falls into this category. The other is for content creators who need both pixel count and precise color accuracy, hopefully in a package that’ll match their MacBook Pro.

You might not expect much from your monitor. Most are large screens, and not much else.

But lately, manufacturers are raising beauty standards. The Dell 2719DC is the best overall monitor you can buy, partially for its good looks. From the side, its profile is razer thin. From the back, its aluminum silver finish is as premium as an XPS 13.

The new HP 27f makes an attempt to compete, but falls short in a number of ways. The bottom juts out in an ugly fashion, and the black plastic cabinet doesn’t do it any favors. The bumpy texture feels cheap, and there’s no getting around that.

It’s not all bad, though. The things HP has done to modernize the HP 27f help out. The squared-off base and black stand match the back of the cabinet better than it did in previous models. But now the strip of silver across the front feels out of place.

The best aspect is the size of the monitor. It comes to a tiny edge along the sides, making for a rather sleek profile from the side. It’s not quite as thin as the Dell 2719DC, but it’s close.

Because the display weighs just over 10 pounds, it’s easy to move from one side of your desk to the other. The stand provides adequate adjustability, including tilt, height, and swivel, though rotation for vertical mode is missing. Lacking a VESA mount, the monitor can’t be hung on a wall.

USB-C is a glaring omission

Another problem is port selection. Unlike some of its competitors, such as the LG 27Uk850-W or Dell S2719DC, the HP 27f doesn’t include a USB-C port. Monitors with USB-C are able to provide power and video output through just a single cable. If your office is anything like mine, taking my laptop to meetings can happen multiple times per day, and having everything docked through one cable is a huge convenience.

It has two HDMI ports, a DisplayPort, and nothing else.

While HDMI is still included in some laptops, USB-C is becoming increasingly common, and that will only continue to grow in the future. That’s a bad sign for the long-term future-proofing of this monitor. Those that offer both HDMI and USB-C ensure the dongle-free life we all want.

Beyond USB-C, the 27f doesn’t include USB ports at all. It has two HDMI ports, a DisplayPort, and nothing else. HP even left out the headphone jack and external speakers.

Like the design, the buttons and menu system are as basic as it gets. Four buttons line the bottom right of the monitor, which give you quick access to brightness, color modes, input switching, and the main menu.

You won’t find much of interest beyond these controls when you dig into the menu. For most people, that’s a good thing. The alternate Viewing Modes aren’t anything special, either, though you might want to use the “Night” mode from time to time.

Accurate colors, as long as you calibrate it

A 27-inch, 4K monitor will immediately be of interest to photographers and video editors. But if your livelihood depends on the trustworthiness of your creative tools, you know a high pixel count is only the first step.

You have to be able to trust the colors of your display in order to make precise edits. That means a panel that shows as close to 100% of the Adobe and sRGB color scales, and has a very low average rate of color error.

As it comes out of the box, the HP 27f 4K isn’t quite there when it come to the color accuracy side of things. The colors aren’t anything that’ll distract you from watching movies or enjoying web content, but for high-precision work, it’s not up to snuff. Monitors like the BenQ PD3220U or LG 34WK95U-W offer that kind of coverage, though they’re much more expensive.

That is, unless you have access to a calibration tool. Using the Spyder5 Elite, I was able to get the color accuracy down to just 0.95, which is impressively low. That doesn’t mean I can outright recommend the HP 27f for creative professionals. You shouldn’t need to calibrate your monitor to fix the panel, and I wish HP had better tuned this one at the factory. But if you are willing to break out your colorimeter, it’s nice to know it’s at least possible to correct the 27f to where it needs to be.

There’s another audience the HP 27f isn’t designed for: Gamers.

One other missing feature is support for HDR. It’s becoming more common in monitors, even in similar options such as the LG 27Uk850-W. HDR10 certification is a boon to both gaming and watching movies, making colors more vibrant. As more and more video gets rendered in HDR, it’s become an important consideration for content creators too.

There’s another audience the HP 27f isn’t designed for. Gamers. I didn’t expect it to be. Playing in 4K is still a fantasy for most systems, and only a few monitors provide higher refresh rates at that resolution. It takes quite a system to push out over 60 frames per second in 4K in modern games.

The HP 27f does offer FreeSync, though. If you’re an AMD gamer, FreeSync can smooth out screen tearing for a better gaming experience, and there’s little reason not to include it for potential AMD gamers. That being said, gaming shouldn’t be the primary reason you purchase this monitor. You’re better off purchasing a cheaper monitor with a higher refresh rate that’s built for gaming.

The HP 27f isn’t the most beautiful monitor I’ve ever seen, nor does it have the out-of-the-box color accuracy needed for creative professionals. It’s image quality isn’t bad, but missing pleasantries like USB-C and HDR let the competition get ahead.

The best alternative is the LG 27Uk850-W. It’s not quite as slim as the HP 27f, but it has better port selection and supports HDR10. The newer version, the LG 27UD88-W, can also be found at a similar cost.

The HP 27f 4K feels sturdy enough, though the absence of USB-C means it’s not as future-proof as I’d like.

It’s missing a couple of key features that its competition offers. Unless you can find it on sale, there are better 4K monitors available.

Topics
The best 4K gaming laptops for 2023
The best ultrawide monitors for 2023
The best 5K monitors for 2023
The best 4K gaming monitors of 2023: ultrawides, high refresh rates, and more
AMD vs. Intel: which wins in 2023?
Dell is having a big sale on business laptops — up to $2,500 off
Ends soon: sign up for NordVPN today and save up to 62%
New AMD laptop CPU destroys its predecessor, winning by 90%
Lenovo is practically giving away this 2-in-1 Chromebook today
This micro-LED advancement is exactly what AR and VR needs
An AI-generated TV channel is mimicking ’90s sitcoms to nightmarish effect
LastPass vs. 1Password: should you switch?
How to overclock Intel’s Arc GPUs for better performance