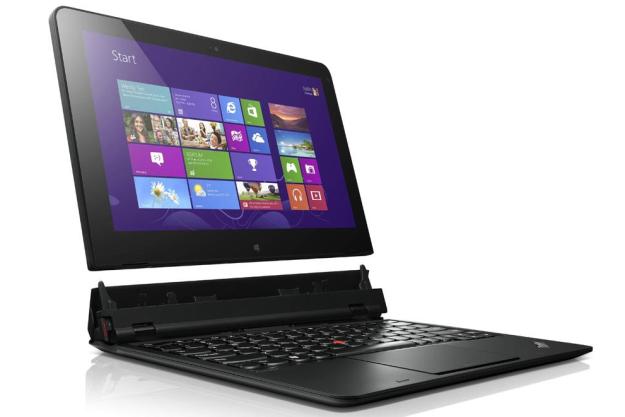 “Business buyers take note: Lenovo’s Helix is an expertly designed do-it-all device with an excellent keyboard and ample battery life. But we do wish it had Haswell and weighed a bit less.”

Since the official launch of Windows 8 last fall, we’ve seen more convertible PCs in more form factors than we’d care to count. But for comfortable use as a laptop, and a relatively lightweight tablet when you don’t need the keyboard, the traditional clamshell with a removable screen (like HP’s Envy x2) is still hard to beat.

Lenovo’s ThinkPad Helix takes that design and – through some complex but well-executed engineering –delivers perhaps the best do-it-all Windows 8 device we’ve seen yet. The Helix functions well as a traditional laptop with long battery life, thanks to its ThinkPad keyboard, dual batteries, and a 1080p IPS panel. And with its Core i5 CPU and SSD housed behind the detachable screen, it’s also a powerful tablet, complete with a digitizer and storable pen.

The price, however, is hard to ignore. A starting price of $1,680 is a lot to ask for an 11-inch device with a 1080p screen, a Core i5 processor, and a 128GB solid-state drive these days – no matter how good the keyboard or battery life is. And stepping up to a 180GB SSD and a Core i7 CPU with Windows 8 Pro pushes the price to more than $2,000. Unless your employer is willing to pick up the tab, you’ll want to make sure the digitizer and detachable screen are important enough to your workflow.

We were huge fans of Lenovo’s Yoga, another convertible PC out on the market. Is the Helix another win for Lenovo, or does it suffer the same fate as the company’s Horizon: a great idea, but just too expensive to justify buying. Let’s find out.

A ThinkPad, first and foremost

The first thing we noticed when we started using the ThinkPad Helix, aside from its rather formidable heft (for an 11-inch Ultrabook), was that it looks and feels like a ThinkPad – from its matte-black exterior to its rugged build to its excellent input devices.

If you’re familiar with recent ThinkPads, the Helix shouldn’t disappoint from a laptop perspective. With the top and bottom rows mostly receiving the shrunken-key treatment, the keyboard feels only slightly cramped. Key feel and travel are excellent for a device that’s 0.8-inches thick – especially since half that is taken up by the tablet. But while Lenovo advertises the keyboard as spill-resistant, there’s no backlight, which feels like an annoying omission in an Ultrabook this pricey.

Though the touchpad lacks any physical buttons and depresses a bit easier than we’re used to, it was very responsive and accurate (and relatively roomy at 4.75 inches diagonal). It’s also very comfortable to use in Windows 8. It’s flush with the wrist area, which makes swiping in from the sides to bring up menus a less jarring affair than with many devices we’ve tested with slightly recessed touchpads.

Of course, Lenovo hasn’t ditched its trademark red TrackPoint pointing stick. It’s still there between the G, H, and B keys. What’s missing, however, is the dedicated second group of mouse buttons below the space bar. Once you get used to it, though, the clickable touchpad serves that purpose well enough.

While the input devices on the Helix are excellent, the port selection and placement suffers a bit due to the device’s versatile design. First (and worst) off, there is no SD card slot or VGA port to be found on the Helix, although both can be added via adapters using on-board USB and DisplayPort connectors.

All the ports, though, sit at the back of the device. There you’ll find two USB 3.0 ports, a rectangular power connector, and the DisplayPort. That’s it as far as wired connectivity goes in laptop mode. If you detach the screen to use the Helix as a tablet, you’ll find one USB 2.0 port, a DisplayPort, a SIM card slot for mobile broadband (on some models), a proprietary dock connector, and anchor holes that keep the screen rigidly attached to the keyboard in laptop mode.

A complex but well-designed hinge

While the Helix is nice enough as a laptop, it’s the versatile, complex hinge that sets the device apart from pretty much anything else on the market. In addition to detaching the screen for use as a tablet, the hinge also lets you connect the screen in two ways. You can either attach the tablet in the traditional, front-facing laptop orientation, or attach it facing out for use in presentations.

Thanks to two dedicated rigid posts on the base that anchor themselves into holes in the bottom of the tablet, the hinge holds the tablet in place well in either orientation. There is a slight gap at the base, where it connects to the keyboard, but the tablet snaps easily into the base with an audible and tactile click. Once anchored, we never once worried that the two pieces would separate accidentally.

While the Helix is nice enough as a laptop, it’s the versatile, complex hinge that sets the device apart from pretty much anything else on the market.

Getting it out again is as simple as depressing a large button on the left side of the base, and lifting off the screen. You can easily attach or detach the tablet with one hand. That alone is worthy of praise, as we’ve seen far more cumbersome convertible designs lately (hello, Acer Aspire P3).

The hinge also adds some extra cooling when the tablet is docked with the keyboard. A pair of small fans blow air up into the tablet. However, in our tests, they didn’t exactly keep the device cool to the touch when doing serious CPU or GPU tasks. With the tablet docked with the keyboard and the fans doing the best they could, temperatures near the top of the back of the tablet reached as high as 124.7 degrees when maxing out the processor or the integrated graphics.

The good news is that you won’t often be touching the top of the tablet while gaming, editing video, or doing other intense tasks. And the keyboard base, since it lacks any components other than the secondary battery, never got noticeably warm.

A powerful, though hefty tablet

With a 1.8GHz Core i5-3337U processor, 8GB of RAM, and 128GB solid-state drive all housed behind the 1080p screen, the Helix is well equipped for most mainstream computing tasks, thanks to its familiar U-series CPU found in many other Ultrabooks. It’ll handle things like Photoshop or basic video editing just fine. But all those components – plus a Gorilla Glass screen, a digitizing layer, and the accompanying pen – means the Helix feels a bit heavy in the hand as a tablet, weighing 1.73 pounds.

Given all that Lenovo managed to fit into the 0.4-inch thick tablet, along with a rather bright 1080p IPS screen, the Helix is impressive from an engineering standpoint. But if your work involves lots of data input while away from a desk, the Helix’s heft will likely at least be an annoyance.

There’s little to complain about when it comes to the screen. It’s an IPS panel, so viewing angles aren’t an issue. And while the panel was only able to reproduce 73 percent of the sRGB scale in our testing (which isn’t terrible, but isn’t great, either), it is one of the brighter panels we’ve seen in a long time.

Long battery life, but no Haswell (yet)

The Helix’s battery life has the odd distinction of being both very impressive, and the best reason to wait for a CPU refresh. While Intel launched its 4th Generation Core (Haswell) chips in early June, the company has yet to offer up the business-focused versions that make their way into ThinkPads and other business and enterprise PCs.

With the Helix, Lenovo delivers perhaps the best-designed and versatile Windows 8 convertible we’ve seen yet.

So we can’t find fault with Lenovo for sticking with 3rd Generation Core processors for now. Indeed, the company has done a great job with what’s available. When we tested the Helix in laptop mode, draining both the tablet and keyboard batteries, it lasted 4 hours and 48 minutes in our extremely demanding Battery Eater test. That’s about an hour-and-a-half longer than Samsung’s Ativ Book 5 lasted on the same test. The tablet alone, without the extra keyboard battery, managed to hold out for 2 hours and 18 minutes on this test. The latter score isn’t exactly impressive, but it’s certainly respectable.

Overall, the Helix’s battery life is great. Unless you push the CPU or GPU hard, it should easily get you through a day’s worth of work without needing a recharge. But what gives us pause is the battery life increases that we’ve seen from systems equipped with the newer Haswell processors (like Apple’s latest MacBook Air).

Intel made some bold claims about its latest chips delivering up to a 50 percent or more battery boost. And from the limited real-world examples we’ve seen so far, those numbers seem plausible. So if you like the idea of a Helix that can hold out for 12 hours or more without needing a charge, you may want to wait until Intel launches Haswell for business users and Lenovo incorporates the chips into Helix models. The newer CPUs will also deliver improved graphics performance as well.

With the Helix, Lenovo delivers perhaps the best-designed and versatile Windows 8 convertible we’ve seen yet. Thanks to an excellent keyboard and a well-executed touchpad, it works great as a laptop. It’s a bit hefty as a tablet, but the 1080p IPS screen looks good. With the included stylus, many people will appreciate pen input. And the Ultrabook-class components mean the system won’t balk when you throw demanding tasks at it the way current-generation Atom-based machines (like HP’s Envy x2) often do.

If you don’t mind its 3.5-pound heft, and you’re looking for a versatile convertible that seems as ruggedly built as any other ThinkPad, the Helix should make an excellent companion in the office or on the road.

But if you like the idea of a Helix that can last a day-and-a-half (or more) without needing a recharge, you may want to wait until Lenovo refreshes the device with Intel’s latest chips. The new CPUs won’t technically make the Helix any lighter, but they may let you leave the charger at home, even on an overnight business trip.