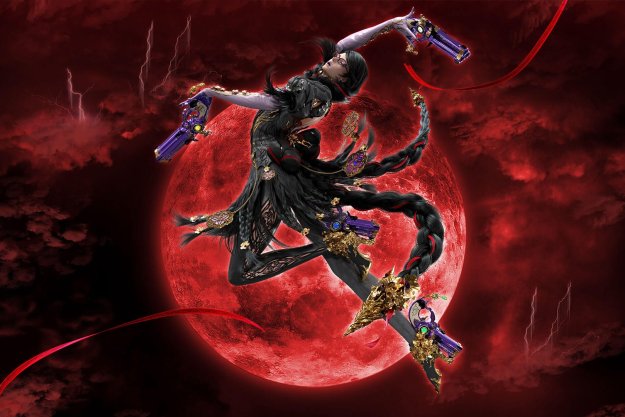 “You'll be hard-pressed to find an action game that's having as much fun as Bayonetta 3.”

The prologue of Bayonetta 3 is more thrilling than the grand finale of most Hollywood blockbusters. The camera pushes in on a serene New York City day as the titular Bayonetta is out for a casual stroll, bag of bread in hand. Of course, everything goes to hell in minutes. A punk rocker wielding a katana falls from the sky, a massive kaiju barrels toward the city in a tidal wave, and Bayonetta is left kicking the crap out of a cruise ship full of mysterious beings as chunks of buildings float by. And that’s just the beginning.

The over-the-top hack-and-slash game almost feels like developer PlatinumGames’ bombastic parody of Marvel movies. Over the course of 15 hours, I’d hear all about the multiverse, notice a visual homage to Captain America, watch characters swing around with grappling hooks like Spider-Man, see a city turn into a Dr. Strange-esque kaleidoscopic illusion, and even catch a few pointed references to the Avengers films. It’s as if Platinum set out to one-up Hollywood’s biggest popcorn machine and assert itself as the real master of spectacle — something it accomplishes in no time flat.

Bayonetta 3 is the series’ wildest entry to date, mixing PlatinumGames’ knack for fast-paced combat with unbelievably entertaining set pieces that just get bigger and bigger. The massive scope of it all makes for some sloppy moments, both technically and narratively, but you’ll be hard-pressed to find an action game that’s having as much fun as this one.

Bayonetta 3 is gaming’s own multiverse saga, beating the MCU to the punch. After New York is attacked by a plague of man-made bioweapons dubbed the Homonculi, Bayonetta learns that a mysterious villain called Singularity is looking to destroy the layers of the multiverse, leaving only their own Alphaverse. She agrees to team up with Viola — the riot girl who fell to Earth and who claims she met Bayonetta in another realm — to search for items called Chaos Gears hidden in other universes.

It’s hard to get bored for too long in Bayonetta 3.

The dimension-hopping narrative is a smart trick, as it gives the threequel a good excuse to change up the environment every few chapters. It begins in New York City, but Bayonetta is later dropped into Japan during a kaiju attack, a war-torn period of Chinese history, the deserts of Cairo, and more. It’s hard to get bored for too long in Bayonetta 3 when the adventure is constantly dishing out visual surprises till the very end.

The multiverse premise is admittedly a bit underused. Rather than spinning up inventive locations that play with the alternate reality idea, it’s mostly used as a way to transport players to Earth locations throughout history. It’s more of a time travel gimmick than a multiverse one, which ends up feeling like a bit of a missed opportunity in the long run. This is the lengthiest Bayonetta game to date by a few hours, but some of those extra chapters end up feeling like narrative filler as the game gets into its back half.

Instead of going all-out with locations, Bayonetta 3 swings for the fences when it comes to gameplay, going beyond the series’ normal hack-and-slash action (though there’s plenty of that, which I’ll get to shortly). One sidequest has me playing a 2D version of Metal Gear Solid where I need to stealthily explore a facility as Bayonetta’s witch pal Jeanne. Another chapter has me riding a demon spider as it scales the rooftops of a city mid-monster attack. A couple of moments like that with the series’ already larger-than-life battles and you’ve got the perfect recipe for a character-driven action game that drops a brick on the gas pedal and does spin kicks in the back seat while the car barrels down the highway.

Not all of its little gameplay diversions are as finely polished as its core combat, but I was rarely bothered by that fact. Even the sloppiest ones are still delightfully ridiculous left turns that make Bayonetta 3 a thrill to play from start to finish. If you’re looking for the perfect popcorn experience, one that’s 100% confident in its silliness, you might want to look to your Switch screen rather than the big silver one.

As with any Platinum game, combat is still the star of the show. Like previous games, Bayonetta 3 delivers plenty of fast-paced hack-and-slash combat. What’s always especially impressive about the series is just how deep the fighting systems go, as players gain access to what often feels like a limitless amount of moves and combos. That’s as true as ever in Bayonetta 3, especially thanks to a host of new weapons that each have their own unlockable moves.

Witch Time returns too, and is still the series’ crown jewel. When dodging at the right moment (and Platinum is generous about when that moment is), time slows down for a few seconds, allowing Bayonetta to get some free combos in on her Homonculi foes. As per usual, it’s an immensely satisfying system that turns each successful dodge into a tangible reward.

Whether you’re a series veteran who wants to turn up the heat or a newcomer who’s just here to watch the fireworks, Bayonetta 3 has your back.

The threequel goes one step further to expand its tried-and-true formula, though. This time, players can hold down the left trigger to summon an infernal demon as long as they have enough magic stored up. While active, Bayonetta stands stationary while giving orders to a giant monster capable of dishing out massive damage. The creatures range from an enormous frog that can sing as a way of summoning poison rain to a literal train that can run through enemies as Bayonetta draws a path for it.

The system can be a little tricky to get the hang of as it goes against some of the muscle memory the series has instilled up to this point. During some of the game’s later fights, I’d find that I’d often summon a demon for only a few seconds before accidentally recalling it because my evasion instincts kicked in. Even so, the extra twist helps bring even more depth to the action. Whenever my health was low in a tense battle, I could summon Gomorrah and direct him to snatch my enemy up in his jaws and launch them into the air, giving me a little space to back off and get some breathing room.

Bayonetta has always been a series about showing off, turning every battle into a sacrilegious ballet of bats and bullets, and the third installment only ramps that up. It delivers more opportunities than ever to stomp demons into a fine powder thanks to unlockable remnant missions and optional challenges that offer some of the game’s most difficult fights. It offers some nice flexibility too, allowing players to scale down the difficulty or even equip an accessory that will boil the complex combat down to two attack buttons. Whether you’re a series veteran who wants to turn up the heat or a newcomer who’s just here to watch the fireworks, Bayonetta 3 has your back.

While it’s easy to forgive some of the game’s less graceful moments, there are some technical distractions that eat into its spectacle. The camera is the main offender, as it has trouble keeping up with all the action and often spins into supersized enemies. The technical limits of the Nintendo Switch are noticeable too, as cutscenes tend to feel a little choppy and images aren’t terribly crisp.

If this does end up being a send-off for the Umbra witch, Bayonetta 3 will become the textbook definition of “going out in style.”

Of course, there’s another shadow cast over the entire project. That would be the controversy surrounding Hellena Taylor, Bayonetta’s original voice actress, who was replaced by Jennifer Hale in the sequel. Taylor made waves when she claimed that PlatinumGames offered her a mere $4,000 to reprise her role, calling on fans to boycott the game. A swell of support would sour the public perception on the game and its developer, though a report from Bloomberg would later dispute Taylor’s account. She’d later clarify her story, confirming most of the report’s accuracy, though she claims a few of its finer details are false.

Regardless of the actual story, I want to stress that the business drama has no impact on the quality of the final product here. Taylor’s performance is missed, especially during one key plot beat that doesn’t land the same without her in the role, but Hale does a perfectly fine job here. You can tell she’s imitating Taylor’s iconic voice, but I frankly don’t think it’s something that would have been scrutinized without the controversy.

On the subject of characters and the voice actors who portray them, I want to take a moment to celebrate Viola, because the new katana-wielding witch steals the show here. The clumsy punk rocker is a perfect foil to the ultra-confident Bayonetta. As a young witch trying to find her footing among the coolest heroes in the multiverse, Viola brings a human element to the historically over-the-top series. Her vulnerability leads to both some of the game’s most tender moments and its goofiest slapstick comedy.

It helps that Viola’s chapters are just plain radical too. Her playstyle is slightly different from Bayonetta’s as she blocks to activate Witch Time, can use a grappling hook to swing, and is able to freely attack when her demon, Cheshire (a delightfully wacky, gothic spin on Alice in Wonderland’s iconic cat), is active — all to the tune of an absolute banger of a pop punk battle theme.

I get the sense that PlatinumGames may be looking to pass the torch to her, whether than be in the mainline series or a future spinoff. At this point, that may be for the best considering both the messy situation surrounding the series now and the fact that she just plain rocks as a protagonist. If this does end up being a send-off for the Umbra witch, Bayonetta 3 will become the textbook definition of “going out in style.”

Bayonetta 3 was reviewed on a Nintendo Switch OLED in handheld mode and on a TCL 6-Series R635 when docked.