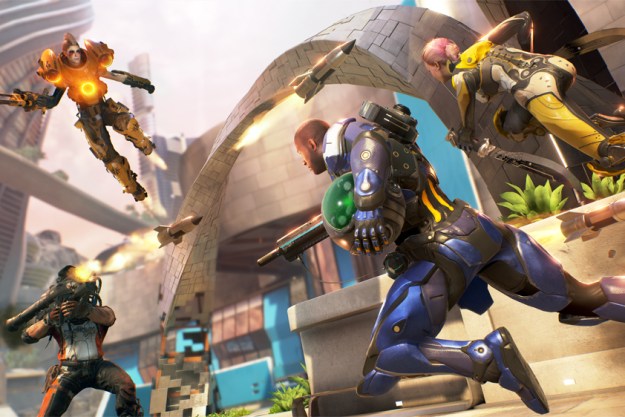 ““LawBreakers” is a speedy, chaotic addition to the shooter market, but might struggle to break through.”

At any given moment, LawBreakers can erupt into absolute, ridiculous, gravity-defying chaos. That delicious disorder, which cropped up time and again as we played developer Boss Key Productions’ multiplayer arena shooter for our LawBreakers review, has its roots in the many distinctive first-person shooters from which the game takes its inspiration (which makes sense, given the pedigree of studio chief Cliff Bleszinski). Lawbreakers’ takes cues from Unreal Tournament’s fast-paced, low-gravity antics, and smart traversal ideas reminiscent of what made Titanfall so fast and fun. Its emphasis on class distribution reflects the underlying team dynamics of titles like Battlefield. And it’s impossible not to compare it to Overwatch, whose roster of distinct “heroes” clearly informs the fact that LawBreakers’ characters are all distinct from one another.

What makes LawBreakers worth playing on PC or console, though, is how well all these elements work in concert with each other. Almost every encounter in LawBreakers has characters warping, flying, boosting, and blasting, firing, and slicing away with all manner of overpowered weapons. It should be a big mess of competing ideas, and somehow, it isn’t.

A fight on one side of the map might be a tight one-on-one duel in which one character is sliding in, trying to close the gap to use close-range weapons, while the other is flying backwards, hoping to connect a powerful laser beam from a distance. On the other side, five or six characters zip around a zero-gravity arena, snagging each other with grappling hooks to get in close with swords or sniping with powerful dual revolvers.

The variety of characters you can choose from and fight against makes LawBreakers feel just shy of out of control, just like Unreal and Quake. In a world in which well-built multiplayer shooters seem to be everywhere, LawBreakers adds a take that melds the past with the future in a way that creates something exciting, even if it is another addition to an already saturated market.

In LawBreakers, two teams of five players face off in one of a handful of objective-based matches. No matter the mode, some areas in every map have bubbles of altered gravity, where you might be able to jump high, float, or even fly. These sections are usually in the center of the map, where most of the action will occur, creating situations in which you can move from a fight on the ground to one in the air and back again seamlessly.

How you navigate those zero-g spaces depends on which of game’s nine character classes you choose. Each class sports a unique weapon, special abilities, and traversal mechanic. The Valkyrie, for instance, has a jet engine on her back, allowing her to fly for short distances. The Assassin uses a grappling hook to swing around the map, including dangerous gaps other players couldn’t cover.

There’s a huge amount of nuance in the character classes, their abilities, and how to best use them in each of LawBreakers’ five different objective-based game types. Although most every character’s MO boils down to “shoot enemies,” their differences — how they move and fight — create all kinds of variety in how you get the job done. Engaging a Wraith, which can slide and jump for high-speed attacks, is a totally different task than fighting off a jet-pack-wearing Harrier. Building a strong team, with different character types that put you at an advantage, can give you an edge.

LawBreakers is often so fast and twitch-oriented, that just because you’re mismatched against another player doesn’t you can’t deftly pull out a crazy win, if luck, skill, or both are on your side. Everyone can step into a low-gravity area in the map and totally change their movement abilities. The fact that characters might fly over you, slide past you, or swing into you creates a huge variety of battle situations, and that potential for lots of different kinds of fights makes LawBreakers exciting and tense in a way many other shooters can’t quite match.

While racking up kills is always important, matches feature objectives that put teamwork ahead of straight-up carnage. LawBreakers packs five objective modes, each a bit of a new take on a classic first-person shooter multiplayer match type. “Overcharge” and “Uplink” are takes on capture-the-flag gameplay, in which you take an object back to your base to score, but in LawBreakers, you have to defend the flags for set periods of time before points stack up.

In Overcharge, the battery can be stolen mid-charge, meaning your hard work defending it can end up benefiting the other team with a timely grab. In Uplink, both teams have their own distinct charge meter, so you have to be just as good on the attack to stop the other team as on defense to score your own points.

“Turf War” and “Occupy” are zone control game-types: In Turf War, both teams try to take control of three different locations, with each one “locking” after one team has stood on it long enough to capture it, before all the zones unlock to be captured again. Occupy has a single control point that roves around the map, and points are scored when your team controls it.

Last but not least, “Blitzball” tasks teams with ferrying a ball to the other team’s goal, with a twist. You have to defend the ball for about 20 seconds in order to pick it up, and if the carrier is killed and the ball dropped, it’s another long, harrowing defense in order to grab it again.

Again, it’s impossible not to see this game and think of Overwatch, with its objective-only gameplay. LawBreakers “answers” Overwatch’s more teamwork-oriented gameplay with a faster, punk rock-ier take on similar material. There is still a focus on building effective teams and grabbing objectives rather than just rocking the other squad’s world, but it’s faster, it’s twitchier, it’s gorier. LawBreakers invokes Unreal and Quake, to the point where it feels like a completely different animal.

LawBreakers offers a markedly different experience from other games, but it might be too little, too late.While it has is a solid, well-built combination of great shooter ideas, it does not have the polish necessary to stand out in a crowd of solid, well-built multiplayer shooters.

For one thing, LawBreakers’ focus on faster gameplay and twitch fighting means its chaos is sometimes overwhelming. With so many character classes, abilities, and weapons in play, the learning curve is steep — and all the game offers in the way of teaching you to play it is a library of YouTube videos.

There’s a (mostly empty) sandbox mode that lets you try out each character’s moves, but for the most part, you’re tossed in the deep end and expected to figure things out. That’s a tough sell for a game that’s as fast and as hectic as LawBreakers, and is trying to build a dedicated player base in a field of other games with dedicated player bases.

Boss Key also neglected a few minor, but important details in the game’s statistics-keeping and scoring that can weaken your connection to the game. At the end of each game, you get a scorecard that marks how much damage you dealt, how many kills and deaths you racked up, and how many objective points you earned.

In some game modes, the statistics are straightforward. In others, like Blitzball, it can tough to understand how you contributed.

Similarly, the support classes, Battle Medic and Harrier offer the ability to dish out health and power-ups to other players, but those elements aren’t tracked at all. In a game that’s all multiplayer, all the time, giving players comprehensive looks at just how well they’re playing is essential to getting them invested in the game, and LawBreakers falls short in a few of these aspects.

LawBreakers comes off as a cool addition to hero-based multiplayer shooters with a ton of good ideas from industry veterans (led, of course, by former Gears of War franchise Lead Designer Bleszinski). It’s just a slightly niche one. That’s good, because a variety of game offerings is always better. But LawBreakers feels like it lacks a major way to stand out, and that might hamper its ability to attract players and get them to abandon their main multiplayer squeezes to learn the ropes of a whole new one.

Again, there’s an elephant in the sniper nest, and its name is Overwatch. The question is whether you want Blizzard’s slower, more deliberately paced version of the hero shooter, or a faster and more frantic one more akin to old-school shooters like Unreal Tournament and Quake?

For our money, all things considered, we’d take Overwatch, but there will definitely be players who prefer this.

LawBreakers is designed to be played forever, with a progression system that unlocks loot boxes and cosmetic items. With nine different characters to master and a lot of nuance between them, LawBreakers a lot of variety in gameplay that should keep shooter fans busy as long as they care to play it.

Yes, if you are looking for a fresh new multiplayer arena shooter experience, LawBreakers is great at blazing its own zero-g path, and does so at a $30 “budget” price. That’s if you’re looking. With more open-ended multiplayer shooters available than ever, you may be fine with the shooter you’ve got.

Note: LawBreakers was reviewed on PC using a copy of the game provided by the publisher.