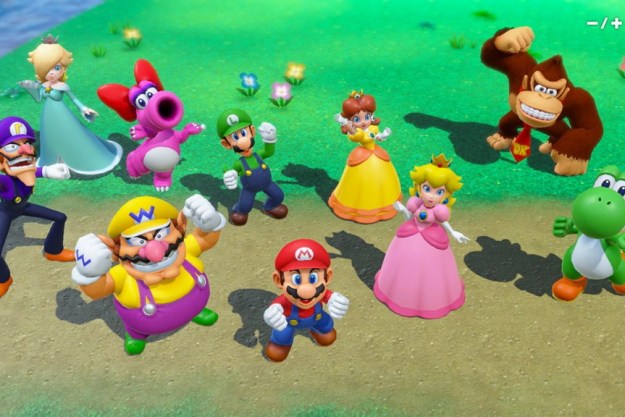 “Mario Party Superstars is the best game in the series, bringing a better selection of minigames and fewer gameplay gimmicks.”

Mario Party Superstars is a much-needed do-over for the multiplayer series. It so effectively learns from the successes and failures of previous Mario Party games that it almost feels like it should be its final entry. We’ve reached Mario Party’s ceiling.

At its core, it’s a back-to-basics nostalgia trip that revives the spirit of the original Nintendo 64 classics. But beyond that, it salvages moments of brilliance hidden within the series’ weakest installments. It treats the Nintendo 3DS’ Mario Party: The Top 100 (a game that featured old minigames, but ditched the actual board game) as an awkward mulligan and gets its “best of” compilation idea right. Most importantly, it’s a second chance for the series on Nintendo Switch after Super Mario Party’s potential was squandered by a lack of post-launch support.

Mario Party Superstars is the best Mario Party game ever, even if by default. The curated nature of it means that players get the best — and most — minigames the series has to offer, though the same can’t be said for its board selection. The commitment to online play at launch puts it ahead of Super Mario Party and makes Superstars the best version of what a Mario Party game can be.

If it ain’t broke

If you haven’t played a Mario Party game since the Nintendo 64, you’ll feel right at home in Superstars. There are no gimmicks or formula shake-ups here. Nintendo has stripped Mario Party back down to its essence: it’s a board game where players roll dice, compete in minigames, and try to win the most stars. That creates a more focused and reliable party game that doesn’t distract with mechanical gambles. It’s not an ambitious entry, but after 15 years of mixed bags, that’s exactly what the series needs.

Curation is the keyword here. Previous Mario Party games would invent over 50 brand new minigames apiece, which could result in a lot of duds as the series’ used up its best ideas. This time, every minigame has been plucked from previous entries, with about half of them coming from the original Nintendo 64 trilogy. Players get 100 of the series’ very best minigames with far fewer stinkers in the bunch.

It’s delightful to see classic minigames modernized here. On a basic level, seeing old favorites is just an effective nostalgia play — I squealed when Pushy Penguins popped up, a Mario Party 5 minigame I played to death as a kid on a GameCube demo disk. But there’s a functional aspect to it as well. A game like Mario Party’s Crazy Cutters, where players trace a shape with a jackhammer, simply controls much better on the Switch’s Joy-cons than they do the Nintendo 64’s clunky analog stick (unless you have drift, that is). Those who have kept their N64’s warm just to play Mario Party with friends can safely pack them away.

A few games have been tweaked as well, making them better than their old-school counterparts. In Mario Party 2, the goal of Dizzy Dancing was to grab one green note floating above a spinning record player while trying to navigate inverted movement controls. This time, the game has been turned into a timed game where players compete to grab as many notes as possible (a change that first happened in The Top 100). The original could end in seconds, but this is a more competitive iteration that’s simply better at ruining friendships.

For those who had given up on Mario Party, it’s a reminder that the formula can still work with the right minigames.

What’s also nice is that the package includes some real standouts from later (and weaker) Mario Party entries. As someone who stopped after the fifth game, I was shocked by how brilliant some of the more recent minigames are. Mario Party 8’s Paint Misbehavin’, for example, is a delightful, Splatoon-like turf war where players try to paint as many Goombas as possible with colored ink. As I went through the batch and “favorited” my standout games, I found that most of them came from the late GameCube and Wii era.

That’s the real success of Mario Party Superstars. It doesn’t just cater to N64 diehards who want a quick nostalgia hit; it takes a long, hard look at the entire franchise and celebrates the moments where it shined. For those who had given up on Mario Party, it’s a reminder that the formula can still work with the right minigames.

In terms of the full package, Nintendo has taken a less-is-more approach here. Rather than loading the game up with tons of half-realized ideas, it’s more focused on the core Mario Party board game. There are no special gimmicks, like Super Mario Party’s character-specific dice or buddy system. Instead, we get the tightest version of the N64 game with slight but smart tweaks to the general coin and item economy.

There’s still a fair amount to do outside of the main multiplayer game though. Mt. Minigames acts as a hub where players can compete in a few additional modes. Some of those are simple, like minigame free play or a 1 vs. 3 challenge mode. A few minigames even have their own score chase outside of the main game, which is a fun touch. Mario’s Puzzle Party, a match-two puzzler from Mario Party 3, has its own three-minute score attack mode, which has become a surprising addiction for me.

The most important feature here is the online component. Unlike Super Mario Party, Mario Party Superstars supports full online play at launch (the former didn’t get that feature until years after it was released). The ability to play Mario Party online with friends is crucial. These days, it’s just not likely that people can consistently get four people together in person to play a few rounds. Multiplayer titles are played over Discord and Twitch streams. The decision to embrace online play is a necessity for the series to remain relevant. It’s a relief to see it included, even if it should have been a foregone conclusion.

What’s also nice is that online play goes beyond the basic board game. Superstars features two online-specific modes: Survival and Daily Challenge. The former has the most long-term single-player potential among the batch of extras. Players go online and try to beat as many minigames as possible in a row. It’s a high-stakes endurance test that adds a smart high score chase to a series that previously lacked a compelling reason to play solo.

The decision to embrace online play is a necessity for the series to remain relevant.

What’s most effective about the game’s various modes is that they all center around the same pool of minigames. Super Mario Party included Sound Stage, a rhythm game mode that was excellent on paper. Unfortunately, it required minigames built specifically for that mode. There simply weren’t enough included in the game to make a lasting impression and the game’s overall minigame list felt stretched thin because of it. Anything you play in a side-mode will ultimately be available in the board game, and vice versa.

The best it can be

When I say this is the best version of Mario Party, that’s acknowledging that the series has a bit of a ceiling. No matter how good the minigames are, the central board game can still be torturously slow. Players can boost text and CPU speed or fast-forward some board events, but there’s no way to really skip through the slower parts of the game outright. The pace does seem a little faster than previous entries, but it still feels like I could take a bathroom break in the time it takes for Toadette to move a star.

Nintendo’s reverence for Mario Party’s past should stop at its minigames. Other parts of the series need to modernize if the series is going to continue.

The collection also stops short of being Mario Party’s equivalent of Super Smash Bros. Ultimate. It only includes five boards, all of which come from the first three games in the series. That’s a smaller number than any of the Nintendo 64 games, which had six minimum. While the list includes standout maps like Space Land and Peach’s Birthday Cake, it also includes somewhat of a dud in Yoshi’s Tropical Island — a frustrating beginner’s map that leaves a lot up to luck.

It’s weird to see the game have such a thorough reverence for the series minigames, but not show the same love towards its boards. Those who really want to make this a party staple will end up playing the same maps over and over. Realistically, Switch owners will probably want to keep Super Mario Party ready to liven the pool up.

Similarly, there are only 10 playable characters here (the list excludes characters like Bowser, who appears as an NPC in certain maps and games). That’s not much of a deal-breaker, especially since characters don’t have specific abilities this time, but it’s a shame that there are no unlockable characters or boards to chase. That was a staple of old Nintendo party games that have fallen to the wayside in recent years. Instead, the game includes a light “level up” system that unlocks collectibles, like music and stickers, in a shop. Collecting enough coins to buy everything is an efficient hook for completionists, but I wish there was something more substantial to keep me playing.

The slim character and board pickings would be fine if I felt like the game might be saving some content for post-launch support. Unfortunately, Nintendo has lost my trust here. I said the same thing after Super Mario Party, a game that felt built for DLC, but received none. In fact, one could argue that Superstars should have just been a paid add-on rather than a full retail game. Out of any Nintendo franchise, Mario Party could really benefit from adopting a DLC model that keeps new games, characters, and boards flowing for years to come. Hopefully, that will be the case here, but I’ve been burned before — and you only get burned once in Hot Rope Jump before you’re out.

Nintendo’s reverence for Mario Party’s past should stop at its minigames. Other parts of the series need to modernize if the series is going to continue. Otherwise, Superstars may be a grand send-off for fans looking to close a nostalgic chapter of their gaming childhoods.

Mario Party Superstars is a delightful celebration of the multiplayer juggernaut’s colorful past. By curating the best minigames from the series, Nintendo has created a more consistent multiplayer game with fewer duds. The back-to-basics approach makes for a more focused experience that isn’t bogged down by gimmicks and experiments. It’s still as slow a game as ever and the selection of boards is disappointingly sparse, but this is about as good as it gets when it comes to Mario Party.

Super Mario Party isn’t as tight a package, but it does contain some fun ideas that didn’t carry over here.

Games can last anywhere from 30 to 90 minutes, so it depends on how often you play. The extra modes extend it out. Plus, there are in-game achievements to chase and a shop full of collectibles to buy. I still don’t have everything after 20 hours.