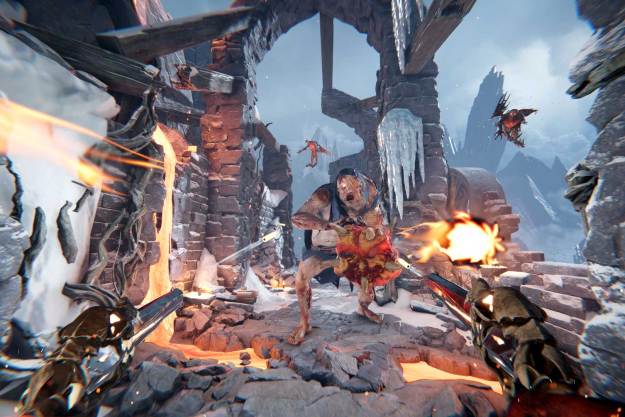 “Metal: Hellsinger will be a hit with metalheads thanks to its killer soundtrack, but its lacking as both a shooter and rhythm game.”

When it comes to subtlety, Metal: Hellsinger says, “Hell no.” Drawing inspiration from 2016’s excellent Doom reboot, the rhythm-shooter takes every design hook that made id Software’s game so memorable and blares them through a stack of amplifiers cranked well past 11. If you could never put your finger on why Doom is such an oddly satisfying play, prepare to have it moshed into your skull.

Developer The Outsiders accomplishes that by adding a beat-matching component on top of fast-paced first-person shooting, similar to Gun Jam. Players have to slay demons in time with fierce metal music to maximize their score and damage output. It deliberately gamifies the experience of subconsciously playing along to a game’s music, though in a way that can feel more restrictive when laid bare.

Metal: Hellsinger delivers on its genre-blending action premise thanks to a killer metal soundtrack that’ll be a hit with its audience. However, in deconstructing the rhythmic secrets of games like Doom, the shooter exposes the bones of its genre perhaps a bit more than players really need to see.

At a passing glance, it’s easy to confuse Metal: Hellsinger with Doom Eternal. The Outsiders isn’t trying to hide its inspirations, recreating Doom’s arena-like battles filled with powerups to grab and demons to slay. Over the course of eight levels, players shoot and slash their way through different realms of Hell in linear fashion, each one culminating in a classic “red bar” boss fight against an “Aspect.” To make the Doom connection even more explicit, health can be earned by melee killing a weakened enemy while it’s flashing. As a pure shooter, Metal: Hellsinger doesn’t do much to out-Doom Doom itself.

Every action is part of one ongoing metal symphony.

The rhythm aspect acts as a counterbalance to that. The twist is that players are encouraged to shoot to the beat of music. Small arrows pulse on either side of a gun’s crosshairs, giving a subtle cue for when the best moment to shoot is. When I’m in the groove, battles are a blast. I cut down some weak dregs with two quick sword slashes, swap to my shotgun to pump some slugs into a larger foe one by one, and follow up with an execution — all like I’m drumming alongside the music with my attacks.

What especially makes that work is some extra attention to sound design and animation. When I need to reload my shotgun, it’s not a thoughtless action. It too cracks open and cocks on beat. If I hit the reload button again on a glowing gold beat, I’ll trigger a quick active reload that shortens the animation, but will get me back to shooting on a different beat than I expect. Even if I don’t need to jump or dash on beat, I find myself doing it anyway to maintain that flow state. Every action is part of one ongoing metal symphony.

While it’s an easy hook to latch on to, it becomes disappointingly restrictive and mechanical. I’m essentially always performing actions on a 4/4 beat, making it feel like my gunshots are the metronome rather than an instrument in the band. It’s a bit of a mismatch for a genre of music that often feels dynamic as it plays with speed and rhythm. Even when the music makes those changes, I’m always just keeping time.

Metal: Hellsinger could have stood to experiment a bit more with its beat-matching system, perhaps drawing more inspiration from games like Thumper than Doom. We get pieces of that in its small selection of weapons, such as a pair of boomerang-like blades that need to be tossed in a quick one-two pattern, but I rarely feel like I’m adapting to the music so much as steadily pushing a button. I’m left with a game that’s not particularly a great shooter nor a great rhythm game.

Metal: Hellsinger would be somewhat disappointing if not for its excellent soundtrack, which does some heavy lifting here. The Outsiders has assembled a metal dream team to deliver its hellacious soundtrack. Singers like Lamb of God’s Randy Blythe and Arch Enemy’s Alissa White-Gluz bring the right level of guttural fury to the experience. Most notably, System of a Down’s Serj Tankian delivers a phenomenal vocal performance on No Tomorrow, which may be one of the best original songs that have ever been composed for a game.

There’s a slight annoyance to how the music is implemented. Killing demons increases a score modifier, which goes up to 16x. Vocals for songs only kick in when that meter is maxed out, and drop out if the combo dips to 8x. It’s a bit of a buzzkill to be headbanging along to a track only to take a hit and have vocals abruptly cut out like someone stopped playing an instrument in Rock Band. It adds some incentive to do well, but makes it hard to soak into the music consistently.

Metal isn’t just a music choice; it’s an aesthetic. The shooter has a blast crafting creating a world that feels like a metal album cover come to life. The story follows The Unknown, a mysterious demon who shows up in Hell one day. The devil, a massive skeleton known as the Red Judge, steals her voice and imprisons her, prompting her bloodthirsty revenge quest. Bits of lore are peppered throughout, building The Outsiders’ vision of Hell with demonic intrigue.

The tone isn’t exactly consistent though. Every mission leads off with an animated cutscene featuring narration from Troy Baker, who voices The Unknown’s talking skull Paz. Baker delivers his lines in a slow southern drawl, sounding like a slick cowboy as light guitar licks play. I felt tonal whiplash as I went between the Western-tinged cinematics and nightmarish thrills that followed.

Even with that odd quirk, this is a game by metalheads, for metalheads. Those who love the music and subculture will feel like The Outsiders has created a game just for them. The soundtrack may be its lasting legacy though, not the shooting.

Metal: Hellsinger can often feel like a one-note experience. While the levels have some visual differences, they’re all identical in structure. Even the majority of its bosses are the same demonic enemy with a slightly different twist added in. While the campaign can be completed in a slim four hours, even that felt a little long by the end as I trudged through the last two realms.

That’s mostly because the shooter doesn’t introduce many new ideas past its opening level. New weapons are unlocked in each realm early on, but that slow drip of tools to experiment with stops in the back half. Once I had a weapon loadout I was comfortable with, I didn’t have much incentive to switch it up. By realm five, I was just in it for the music — an itch a Spotify playlist could have scratched.

It inadvertently removes what’s so special about gaming’s natural rhythms.

It’s no surprise that some of my favorite moments came from the game’s bonus challenges, dubbed Torments. Completing a realm unlocks three timed challenges where I need to kill demons to extend the clock. Each brings a unique twist, which switches up the gameplay. One would auto-swap my weapon at random, forcing me to switch my strategy on the fly. Another would force me to land kills with my weapon’s ultimate ability. While I settled into a workmanlike flow in the story, Torments kept my blood pumping with high-stakes clock races that reward some extra perks.

Aside from that, high score chasing seems to be the name of the game. Players accrue massive point totals during a level as they string together “combos” (these are generally just basic strings of actions like getting two quick kills or dashing in succession) and the final total gets placed on a leaderboard. For those who want to get competitive, Metal: Hellsinger will require a lot more quickness and precision, and that should keep it exciting.

That need for speed left me with some control gripes, though. Players hold four weapons at a time, with a sword and bullet-spewing skull equipped at all times. However, each one has to be swapped in to use it, as all weapons fire with the same button. That slowed down the pace of combat just enough to leave me wishing I could push in a stick to sword slash rather than having to cycle to it. If I want to use that tool on a controller, I’d either need to pop down to the D-pad to equip it or press the right bumper twice (one press will bring up the skull instead, a weak weapon I barely used). I’d often find myself slipping off-beat as I fumbled over to the weapon I wanted to use.

As I struggled with that, I thought back to Doom Eternal, a game whose DNA lives in Metal: Hellsinger. In that game, the action never stops. The control scheme allows me to shoot, chainsaw enemies, belch fire, and melee with dedicated button assignments. When I played that game, I subconsciously approached it like a rhythm game as I weaved every piece of my arsenal together into one symphony of destruction. Metal: Hellsinger seems fascinated with the invisible groove we find ourselves in when playing games like that. But by putting explicit cues on-screen, it inadvertently removes what’s so special about gaming’s natural rhythms.

If Doom is a jam session that gives players space to improvise, Metal: Hellsinger is a high school recital. There’s only so far you can stray from the sheet music.

Metal: Hellsinger was tested on PC and Steam Deck.