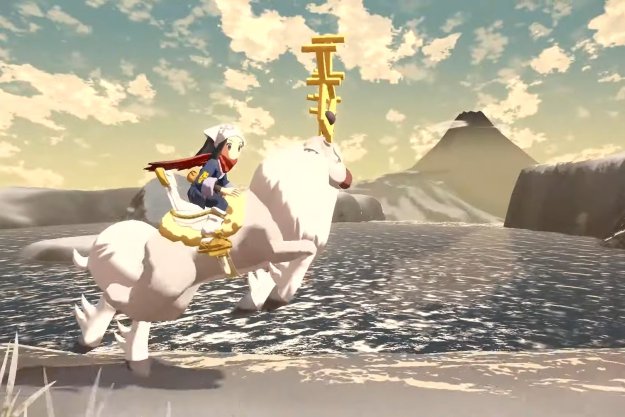 “Pokémon Legends: Arceus is a step in the right direction for the aging series, even if its technical limits can't always support its ambitions.”

For the past seven years, every new Pokémon game has felt like a good idea scribbled onto a napkin. Each new release puts a genuinely clever spin on the franchise, but none have felt like a full painting. Pokémon Legends: Arceus isn’t that final version either, but rather a museum collecting all the best doodles in one place.

In the franchise’s biggest departure to date, developer Game Freak has thrown some of the series’ fundamentals out the window. There are no gyms, no elite four, and no competitive component. While it draws inspiration from more contemporary RPG series like Monster Hunter, it’s more focused on organizing disparate Pokémon innovations from the 2010s in one place.

Pokémon Legends: Arceus makes bold changes to the tried-and-true formula, successfully kicking off Pokémon’s long-needed reinvention. But the series’ technical limits hang around its neck like an everstone, preventing it from fully evolving.

Bitten by the Breath of the Wild bug, Pokémon Legends: Arceus is an open-world reimagining of the monster-collecting series. While there is catching and battling, the key verb is “researching.” Players are dropped into an ancient version of the Sinnoh region (called Hisui) and are tasked with creating the first Pokédex.

The emphasis on research leads to some ingenious gameplay hooks. Observing Pokémon behavior nets players research points, which help build out a full Pokédex entry for the creature. Players get points by, say, catching a Pokémon, using type-effective moves against it in battle, feeding it, etc. It applies the idea of mobile-like daily challenges to each creature, letting players progress for doing virtually anything. It’s satisfying to check off boxes and there are quite literally thousands here.

At times, Pokémon Legends: Arceus is a dream come true. Creatures roam free and can be caught by simply tossing a ball at one without even initiating a battle, an improvement on Pokémon Let’s Go’s streamlined catching. Wild creatures can attack players, forcing them to dodge out of the way. Players can ride creatures like Wyrdeer, jump in the ocean, and seamlessly switch to sailing around on a Basculegion. Whenever I found myself locked in the gameplay loop, it really felt like the seemingly impossible dream game I always imagined as a kid.

Other times, it can be a bit tedious. Creature studying became a grind whenever I needed to do it to up my star rank (a sort of world progress indicator) and advance the story. It’s most reminiscent of Pokémon Go, which unconvincingly gamifies repetition. Arceus handles that idea much better, but it can wear thin once you’ve caught your eighth Shinx.

In its best moments, Pokémon Legends: Arceus is a cozy game about humans learning to coexist with the unpredictable creatures around them.

In terms of its scripted content, the game is hit-and-miss. The main story never feels like it fully takes advantage of its feudal setting; it just feels like your average Pokémon world, minus the extravagant cities. Sidequests are more entertaining, though. These micro tales explore Pokémon behavior in gleeful ways. One mission has players capturing a Zubat to help a woman figure out how they fly in the dark so easily. Another has players on the hunt for a stray Drifloon that keeps playing with the village’s children.

In its best moments, Pokémon Legends: Arceus is a cozy game about humans learning to coexist with the unpredictable creatures around them. For those who never cared about the competitive side of the series, it’s a warm, fuzzy experience that rewards players who identify more with professors than trainers.

While fighting isn’t the main emphasis, it’s still a core part of the game. While it retains the series’ turn-based battles, they’ve been completely retooled here — and that’s for the best. The biggest difference is that Pokémon now have initiative in battle, so a Pokémon’s speed stat is essential. Rather than both creatures trading moves back and forth, a turn order determines when each acts. That means that a quick monster could get two attacks in before its opponent gets one.

To pair with that idea, Arceus introduces a new hitch to moves. When a Pokémon “masters” a move, it can choose to execute it in a strong or agile style, which both use more powerpoints. Strong style hits harder, but usually means it’ll give the opponent an extra move. Agile style does the opposite, trading power for extra moves. Those changes make battles even more strategic and tense, as players need to balance their damage output and attack frequency.

A creature’s move set can be switched around at any time. Anytime a move is learned, either through leveling up or buying new ones, it’s added to a list. Players don’t need to forget a move to set a new one, which mercifully removes one of the series’ most convoluted features.

Combat gets tough, which is great news for players who have been begging for the series to challenge them. But it’s also been streamlined in all the right ways. On-screen symbols better communicate when a Pokémon‘s stats are altered, there’s a tab in battle that explains every active buff or debuff, and players can change Pokémon on the fly without opening a menu. Every single quality of life improvement is stellar and should come to the main series.

I have no doubt that many of the mechanics here will come to the next mainline Pokémon game based on how fans receive them here.

But I sometimes felt like I was toying around in a design proving ground. That’s especially apparent in noble Pokémon battles, which iterate on Sun and Moon’s totem battles. Here, players face a powerful monster by repeatedly tossing balms at it, sending out Pokémon to weaken it, and dodging attacks.

While they’re an excellent change of pace, there’s only a handful of them throughout the adventure, and only the last one or two fights really find the concept’s footing. In the first noble fight against Kleavor, I didn’t even send out a single Pokémon to defend me. I just pressed one button over and over to throw balms — not exactly a Monster Hunter-quality fight.

Few of the ideas here, both in combat and outside of it, feel like the final draft. Instead, Arceus is a safe space for Game Freak to test new ideas without freaking longtime players out. I have no doubt that many of the mechanics here will come to the next mainline Pokémon game based on how fans receive them here. It just leaves this game feeling like a solid opening act.

When it comes to the tech side, I won’t mince words: Pokémon Legends: Arceus is an ugly game. I say that as someone who openly mocked people who complained about Sword and Shield’s visuals. While I felt that the unambitious art style suited that game well enough, it’s less of a fit for an open-world game that’s built around inspiring awe.

Landscape textures jarringly shift and load while players move through the world. Sometimes, distant Pokémon will move in a two-frame animation. Character clothing is muddy when shown close-up, with more jagged lines than a GameCube game. The “pop-in” issue from Sword and Shield is back too and much more frustrating considering that the fun of an open-world game is seeing something off in the distance and traveling to it.

The open-world design itself isn’t inspired either. Rather than tossing players into one giant world, it breaks it off into five distinct biomes. Each one has a specific motif, which means you don’t get a lot of visual diversity. When you’re in the grassy zone, it’s just fields and trees for miles with little variety. Some other areas frankly look the same, but with slightly different textures or lighting. That’s a shame coming off Sword and Shield’s surprisingly well-designed Isle of Armor DLC, which features an intricate, varied island.

There aren’t many environmental secrets to uncover, which made Breath of the Wild’s Hyrule so satisfying. Instead, it’s a big empty space built to contain Pokémon — one that feels like a testing prototype at times.

While I’ve really enjoyed my time with the game, it’s a little frustrating, too. It highlights just how glacially the franchise implements change. For the past seven years, every single Pokémon game (mainline and spinoff alike) has experimented with genuinely neat ideas, but all stop short of presenting the best version of it. I’m always left anticipating a follow-up that’ll really pull it together.

With Pokémon Legends: Arceus, I’m in the exact same spot. I’m already imagining how the next Pokémon game can integrate all these new mechanics and make the game of my dreams a reality. But that’s a few years off, and the franchise already feels like it’s consistently five years behind. Arceus is a step in the right direction, but it still has a lot of catching up to do.

Pokémon Legends: Arceus takes a lot of experimental swings — and many of them are successful. The pivot to research-driven gameplay does a better job at rewarding players for every little thing they do. The quality of life changes it brings to the table are excellent across the board and feel like they’ll become standard in the series going forward. It’s just held back by some first draft design ideas and weak visuals that can’t support the project’s ambitions. Even with its issues, it’s still left me hopeful that the series is finally ready to evolve.

For more traditional fans, grab Pokémon Sword and Shield and its stealthily good DLCs. Those games contain some of the same open-world experiments along with the normal series hooks.

I completed the main story in 15 hours after completing roughly 50% of the side-quests. Between researching, completing all quests, and finding collectibles, I imagine it’ll keep dedicated fans occupied for dozens of hours total.

Yes. While it has its warts, Pokémon Legends: Arceus is an intriguing and much-needed reset for the aging series. It’s a cozy experience that’s a perfect match for the Nintendo Switch.

Pokémon Legends: Arceus was tested on a Nintendo Switch OLED in handheld mode and on a TCL 6-Series R635 when docked.