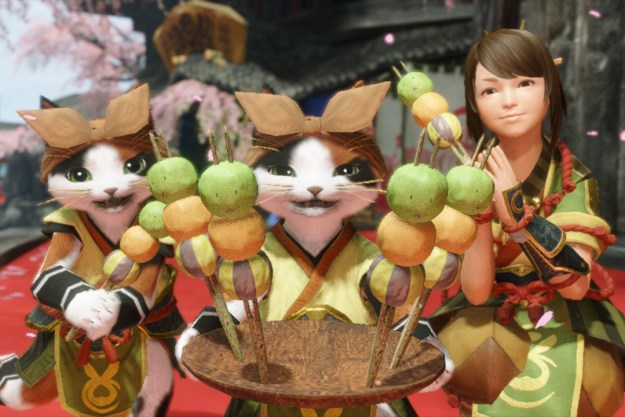 “Post-game updates will ultimately decide whether this is a sure-fire classic or simply a solid stepping stone to something greater, but even at launch, Monster Hunter has never felt better.”

With each new Monster Hunter title comes a streamlined experience designed to shred the notion that Capcom’s biggest series is a punishing grind that’s out to make you weep. On the surface, Monster Hunter Rise could easily be mistaken for a figurative Monster Hunter World Lite–a less visually striking Action RPG that simplifies Capcom’s most successful game yet to run on the compact and comparatively weak Nintendo Switch console. But that couldn’t be further from the truth.

Monster Hunter Rise is a brilliant standalone entry that builds upon what the previous game did both right and wrong. It takes the franchise another bold step forward in the right direction while retaining just enough of the old-school charm to not further alienate veterans left wanting after the last. Whether it outshines what came before, though, depends on what the future has in store.

As in previous games, Monster Hunter Rise pits you against terrifying beasts at the top of their respective food chains. The titular monster hunts are lengthy battles of brain and brawn where even a poorly timed chug of a potion can open you up to a world of hurt. Unforgivingly long animations and steep learning curves have sent many hunters packing over the years. It’s that stigma that recent titles have attempted to shake without foregoing what made it great.

Built to add a new level of verticality and speed to the traditionally sluggish combat system, the crowning achievement of Monster Hunter Rise is the Wirebug system. This new swiftly-recharging resource allows players to web-sling their way through any given part of the hunt, turning the largely grounded experience of past games into a far more fluid and reactionary affair.

Whether you’re lugging around a hefty hammer or packing lightweight dual blades, you can close in on fast-moving targets, zip out of harm’s way, or quickly execute a bunch of flashy weapon-specific assaults at the push of a button. It’s both an offensive and defensive toolkit that builds upon the situational Wedge Beetle and arguably unbalanced Clutch Claw from the previous title, with at least a half-dozen reasons to use it arising every second.

Everything about the core formula has been optimized to the tee.

There’s a level of expertise needed to properly time a Wirebug skill, though. Committing to the assault is like watching a game-deciding shot unfold in your favorite sport. It’s a tense moment of judgment with plenty of risk, and you’ll doubt your decision until the moment you touch down. From large enemy attacks you can vault over to sling-shotting yourself from the quest hub and straight into a seat at the restaurant for a pre-hunt meal, it’s clear the game was designed around the Wirebug from the get-go.

As the possibilities present themselves, it’ll be hard to go back to a time before. Everything about the core formula has been optimized to the tee. From seamless battlefields littered with supplies to a level of player mobility far and away from the franchise norm, there’s virtually zero downtime between battles. Once you decide the hunt is on, it’s on.

Another part of what enables the break-neck pace of Monster Hunter Rise is the return of open-world gameplay. Though noticeably less dense and detailed compared to the last major release, Rise features sprawling zones that, at a glance, often dwarf that of its predecessor. The reduction in ground clutter results in areas that feel less nestled in farfetched fantasy and better suited to the frantic action of the hunt, with tools like Great Wirebugs, additional spawn camps, and your rideable Palamute doggy pal helping make traversing the grandiose locales an adventure in and of itself.

To keep fast-travel from shrinking the scope of the world, creatures able to boost your combat prowess are strategically scattered around, creating just enough reason to take the long route to your target. There are even a bunch of secret messages masterfully hidden around each map for the lore-hungry few to scout out when not on the clock that should take a good while to fully uncover.

As a potential casualty of the effort to streamline the core experience, Kamura Village is a little smaller than your typical in-game quest hub. But with a smaller village comes a greater concentration of the franchise’s charming cast of throwaway characters. The people of Kamura Village range from quaint and elegant, to rough, boisterous, and theatrical–though some signature janky facial animations can cause the English localization to result in some cringy and uncomfortable cutscenes.

It’s a slight shame to see the Meowster Chef get axed after making his silver-screen debut in last year’s live-action movie, but Yomogi the Chef and her cute little rice-pounding kitties inject a level of cuteness that was sorely missed in the gruff and goofy Monster Hunter World. Skip the adorable song and dance that comes free with your meal of dubious nutritional value and you’ll prove you’re the real monster. Like much of the game’s soundtrack, you’ll struggle to resist whistling along as she skewers the little pudding pops like the culinary ninja she actually is.

Skip the adorable song and dance that comes free with your meal of dubious nutritional value and you’ll prove you’re the real monster.

And the fun goes beyond the characters, too. When you’re in need of supplies, it’s your awkward dog that has to pull its weight by heading off on a submarine voyage to barter for the goods while your feline friend waves goodbye from the safety of the shore. The more handy animals you adopt, the more arduous labor you’re able to have them passively complete while you’re out there risking life and limb. Just keep telling yourself they’re happy to do it.

Not content with relying solely on the Wirebug to carry the game forward, the new Rampage quest type shakes up the formula even further. It’s not quite the stampede the occasional loading screen art depicts, but it’s well worth getting excited for. Rampage builds upon the Siege missions of past titles, only swapping out monsters of world-shattering size for dozens of the breeds you tackle on your regular quests.

It’s a glorified tower defense mode in all but name. Waves of beasts charge over the fences and you’re tasked with setting up the cannons, ballistae, and even machine guns needed to fend them off. Your strategy isn’t forced on you through an arbitrary build limit, either. You can set up as much artillery as you want. You’re only limited by how quickly you can fling yourself to one gun or the other to keep the beasties from bashing down the walls and smashing the village.

Monster Hunter has always been about tense altercations, and if what Rise has to offer right now is any indication, things will really heat up over the course of its life.

Things start off rather tamely, but as Rampage missions often bar you from the next level of quests, it’s here where you’ll endure some of the game’s most gripping moments–especially in co-op. Having a team of four juggle various types of heavy artillery, stoking the fires to repair damaged turrets, or trying to line up an explosive blast as a last resort is as exhilarating as it is mentally exhausting. Monster Hunter has always been about tense altercations, and if what Rise has to offer right now is any indication, things will really heat up over the course of its life.

Which gets us onto some of the more uncertain parts of the title. For series veterans, Monster Hunter World was a case of quality over quantity: A relatively short game with little challenge. Even by the end of its run, its monster roster lagged behind that of Monster Hunter Generations Ultimate.

Like it or not, there’s a similar story unfolding here. Monster Hunter Rise lands with around 31 old, new, and returning favorite beasties to hunt. It’s not a small number by any stretch of the imagination, but it suggests history is repeating itself. Even higher difficulty content–often considered the “true” experience–is locked behind pending free updates. There’s still plenty on offer between the single-player campaign, multiplayer quests, and arena battles, but if you were hoping for a complete, it’s time to simmer those expectations. It might not have quite enough content to satisfy franchise veterans banking on the team to right the few wrongs of Monster Hunter World, but there are still dozens of hours of gripping gameplay to sink your sword into.

A sign of stellar game design, Capcom has yet again managed to inject a new lease on life into the franchise without watering down what made it so special almost 20 years ago. Rampages are a riot and Wirebugs are a triumph, opening the door to heart-stopping combat rolls and first-pumping combos and will have even newcomers feeling like master hunters at the push of a button.

Post-game updates will ultimately decide whether this is a sure-fire classic or simply a solid stepping stone to something greater, but even at launch, Monster Hunter has never felt better. It’s an absolute must-play and another reason to never doubt Nintendo’s little tablet that could.

Yes and no. Monster Hunter Generations Ultimate is the better value game right now. The Hunter Style system is a precursor to Monster Hunter of today. It’s still a blast to experiment with, but the higher difficulty curve can be off-putting to those just looking for a bit of fun. If you don’t have much experience with the franchise’s past, Rise is the place to be right now.

You can burn through the core experience here in around 100 hours. Far less if you’re only in it for the story. Free post-launch updates will keep it going for at least a year, but it’s far from the richest game in the series.

If you’re a fan of intense action RPGs, there’s very little like it on the Nintendo Switch right now. It’s a must-have. Once you get to grips with the combat, squeezing in a hunt in a hurry is a rewarding experience.