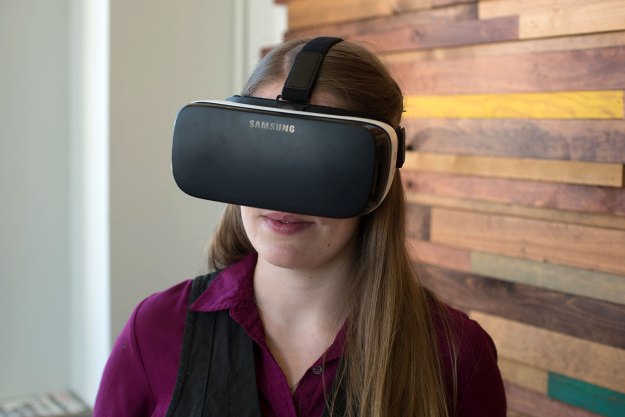 Chances are you’ve heard about virtual reality for most of your life, in one form or another — and it probably hasn’t impressed you. Blinding yourself with a geeky looking headset has long felt like the ultimate in antisocial behavior. Oculus and Samsung think they can change your mind with a new, affordable Gear VR, which is priced at just $100.

The latest Gear VR is Samsung’s third model, but the first one it doesn’t consider a development unit. Available on four major Samsung phones out now, it has more than 100 games and apps. While not the most affordable virtual reality headset for phones (see: Google Cardboard), it is the best — by a wide margin.

More comfortable at half the price

The final Gear VR is a lot more comfortable to wear than the two Innovator Editions that came out in the last year (each at double the price, $200). It’s also the most comfortable mobile VR headset out yet, especially if you consider its added functionality. For starters, it’s about 18 percent lighter than its predecessors, and most of that weight comes from the elimination of the needless hard plastic straps that helped hold the previous units in place. While meant to make the old headset feel more secure, they actually made it bulky.

As before, Samsung sells the Gear VR in any color you want (as long as it’s white), but Samsung has removed a cheap-looking gloss coat that covered the last one. The new Gear VR has a matte coating that doesn’t pick up fingerprints and feels more luxurious.

Changes to the Gear’s dimensions have made it large enough to fit over most glasses. Increasing the size to accommodate them means some users will notice light leak around the edges, but we didn’t see much evidence of it, and certainly didn’t find it distracting. Overall, the upgraded rubber mask and felt pads fit snugly and should last longer than the crummy foam pads on earlier models. You can remove and wash the new pads as well, which is nice if you happen to be working up a sweat (no, we don’t want to know why you are).

Like the previous versions of Gear VR, this model has an added motion sensor that’s about 10 times more accurate than the accelerometers and gyros in the phone. It’s surprisingly accurate and far superior to mobile VR units that rely on the smartphone’s sensor alone. The Gear VR also isn’t just a cradle for your phone; it connects to it and works with it. For example, if you take off the VR headset, it shuts off the screen. And when you put on the headset, Oculus software starts automatically on your phone (we used a Galaxy Note 5). Most VR headsets don’t have controls at all, let alone a smart interface like this.

Samsung has added a Micro USB port so users can charge a phone while VRing, but more importantly, the directional touch pad on the right side is far easier to use and understand. There are now indentations to indicate which directions are up, down, left, and right, as well as how far to slide your finger. Smack in the middle is a circle – your virtual OK button. A separate Back button still exists as well. This works a lot like the Home button on your Android phone, taking you back to the home screen.

The Gear VR software interface still has a blocky, flat design, reminiscent of Windows 8 or the Xbox One. A recently played big game or app sits dead center, along with some other app/game suggestions. On the left and right sides are the Library and the Oculus Store, where you can find other apps. Selecting what you want to do is as easy as looking at it (there’s a cursor) and tapping the OK button on the headset. Scrolling through pages of apps is easy, but it takes a minute to figure out you have to swipe down on the touchpad to do it.

Virtual reality is fun to try, but the reason you should try a Gear VR is those games that actually show it off. Yes, there are some apps as well, but most everything worth downloading is a game.

We liked the Netflix app, but couldn’t get it to play video. Hopefully an app update will fix this. You can browse Facebook, watch 360-degree movies and videos, or check out Twitch, and there are some rudimentary rooms where you can socialize with others. However, these social experiences weren’t more interesting in VR than on any other device.

But when it comes to games, there’s a good variety to choose from. No, there’s nothing on the level of Fallout 4 yet, or any game that may eat up 80 hours of your life, but there are numerous bite-sized titles that make novel use of the headset.

Our favorite game so far is Gunjack, a simple arcade-style space shooter. It has no special story, but the 3D graphics are crisp and the accuracy of aiming at alien spaceships by simply looking at them is unmatched by any traditional video game. First-person Temple Run VR is also a blast, and a bit horrifying. If you thought those things chasing you were gorillas, prepare for a surprise when they eat you in VR.

The highlight is Land’s End, created by the developers behind smash hit Monument Valley. It’s easily the most relaxing game experience I’ve had all year. Land’s End lets players float around serene islands, solving simple puzzles with your telekinetic powers. While the graphics are simple, the developer’s artistic style makes the most of what’s on screen, and the result proves that VR doesn’t have to be photo-realistic to maintain immersion.

Darknet, Ikarus, and Omega Agent also offer unique blends of action and fun. Omega Agent, in particular, is like a VR version of Pilotwings, where you fly a jetpack around a city. Don’t worry — it has a shotgun on it. If you buy a wireless controller like the Steel Series Status XL we used during the review, you can play more complex games, as well as classic arcade games like Sonic the Hedgehog. Such titles don’t play differently in VR, but the headset acts as a massive display.

We’ve had the Gear VR for about a week and seem to find some new gem every time we open the store. Because apps are acquired through the Oculus Store (not Samsung’s app store), developers working on Oculus Rift games may choose to support the Gear VR, as well.

The Gear VR is a lot of fun, but like all current VR headsets, it suffers the “screen door effect.” Samsung’s compatible phones have extremely high-resolution displays, yet pixels (and the gaps between them) become visible when the screen is an inch from your face. Adjusting focus on the headset using the rotating wheel up top is easy, but it’s difficult to avoid tinkering with it because things never look as crisp as you wish.

No other virtual reality experience is this easy to access.

Perhaps it’s just me, but I got very excited about watching VR Netflix in bed. I was disappointed to find the Gear VR only works well when you’re sitting up straight. It cannot easily adjust to a relaxed, laying position. This is a shame since several of the apps involve lying on the beach and chilling out in a virtual world. If you can figure it out, some apps have Void modes that let you reorient the headset, but it’s complicated and not as pretty.

Finally, there’s the issue of sharing. To use this, you have to plug in your phone — but what if your friend or family member wants to play? Unless they own a Galaxy S6, S6 Edge, S6 Edge Plus, or Note 5, they will have to use yours. That’s fine for a few minutes, but the thought of missing hours of texts, calls, and notifications stressed us out. If you buy a Gear VR for your kids, make sure they own their own fancy Galaxy S6.

Battery life isn’t a huge issue. The Gear VR doesn’t take batteries; it’s entirely powered by your phone, and it will suck up battery as much as a 3D game would. Samsung added a Micro USB charger to the Gear, so you can charge it while using, but that makes it easy to become tangled. The headset does turn off the screen when you aren’t wearing it, but the battery seems to drain much faster than in ordinary idle. We expect Samsung will fix this issue over time.

For now, battery life isn’t a massive concern unless you play Gear VR for hours and hours at a time.

Samsung covers manufacturing and battery defects in the Gear VR for one year after purchase. If you drop it, someone steals it, or it gets too wet and won’t work, it’s not covered. Samsung does offer extended Protection Plus coverage for its phones, which cover spills, cracked screens, and other accidents. This program has a two-day replacement time window.

SteelSeries Stratus XL BT controller ($70)
To get the most out of the Gear VR, and play all its games, you need a wireless controller. This is one of the best.

Sol Republic Shadow Wireless headphones ($85)
Buy yourself some Bluetooth headphones or earbuds with a mic in them. These are some of our favorites from Sol Republic.

If you own a Samsung Galaxy S6, S6 Edge, S6 Edge Plus, or Note 5, we highly recommend the Gear VR at its new $100 price. Thanks to a fantastic collaboration between Samsung and Oculus, the Gear VR is the best mobile VR experience on planet Earth.

No other virtual reality experience is this complete or easy to access. There aren’t many great apps yet, but there are nearly 100 games, and more than a dozen of them will entertain you for hours. We hope options open up to access the world of Oculus on more Android phones, and the iPhone, in the years ahead.

Now, if you’ll excuse us, we’ve some games to play.