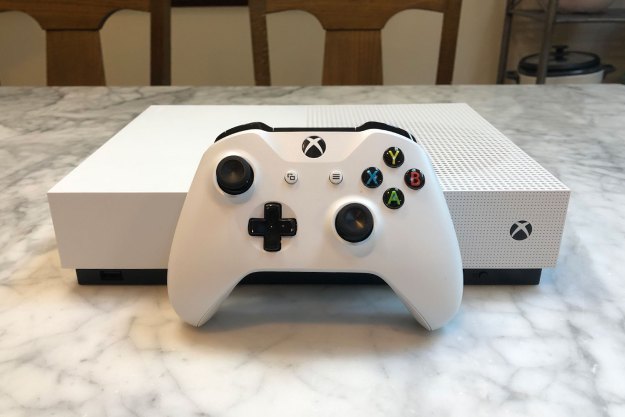 “The Xbox One S All-Digital Edition is a capable game console, but its price is too steep to not play discs.”

The future of video games is digital. With game streaming on the horizon, and digital downloads slowly taking the place of physical games, the arrival of Microsoft’s Xbox One S All-Digital Edition makes sense. Well, sort of.

At $250, it’s a less expensive alternative to the standard Xbox One S that omits the disc drive and retains all of its power. Paired with a Game Pass subscription, it could be the perfect option for a new Xbox One owner or anyone looking to pick up a second console. This late in the Xbox One’s lifespan, however, the cash you’d save by purchasing an All-Digital Edition, could easily be made back if you’re willing to buy used games instead of new games for a standard console.  It can certainly function as your primary game console, but there are better values and more capable game consoles available elsewhere.

Get started with a bang

Out of the box, the Xbox One S All-Digital Edition has everything you need to get started. Alongside the console and required cables, download codes for three games – Sea of Thieves, Forza Horizon 3, and Minecraft – are included. Right out of the gate, including Horizon 3 instead of its sequel is an odd choice, considering the big innovations to seasons and massive variety of races available in Forza Horizon 4.

Two of the three games can be played offline, but Sea of Thieves requires a persistent online connection, and only one free month of Xbox Live Gold is included.  This means you’ll need to fork over additional cash if you want to continue playing the game after the initial month.

In order to facilitate your entry into Xbox Game Pass, three months of the Xbox Game Pass Ultimate service are also available for $1 when you first use your console, though current Xbox Live members can do something similar through an upgrade.  Some physical Xbox One games should also be eligible for Microsoft’s exchange program, with you receiving a digital version in place of your disc.

The physical appearance of Xbox One S All-Digital Edition is nearly identical to the standard version of the console, with the most visible difference being the missing disc drive on the front. Sleek, small, slightly lighter, and taking up far less space than the original Xbox One, the All-Digital Edition is an attractive option for those who have been waiting to upgrade. Much of the top of the console is used for venting, as are the sides, and we’ve never encountered issues with heat during our time with it. It’s also very quiet, albeit not quite as silent as the vapor-chamber-equipped Xbox One X.

The All-Digital Edition is a sleek, small system that will take up far less space than the original 2013 Xbox One.

The Xbox One S All-Digital Edition retains the same ports and sensors as the original Xbox One S, including three USB 3.0 ports (one in the front, two in the back), an Ethernet port, an IR blaster, and S/PDIF. Because there is no disc drive, there is no disc ejection button. The console also does not include a Kinect port . If you have a Kinect camera from the original Xbox One, you can connect it via an adapter, but this comes with two issues.

The first is that the adapter needs its own power supply, which wasn’t the case on the original Xbox One. The second is that the adapter has been discontinued: Purchasing one now will cost around $25, but there’s no guarantee you’ll always be able to find it from third-party sellers. Because of Microsoft’s integration with its own service Mixer as well as Twitch, having a Kinect sensor gives you a quality webcam. Continuing to exclude this one port makes it more difficult than necessary to fully utilize the Xbox One’s streaming capabilities.

Once you’ve picked a game and have started playing, you will notice absolutely no difference compared to the standard Xbox One S, and the only major difference compared to  the original Xbox One is HDR support . The Xbox One S All-Digital Edition is a capable gaming machine for those with 1080p displays, but it lacks some of the advanced features found on the more expensive Xbox One X. 4K gaming isn’t an option, which is to be expected at such a low price. But less-capable hardware can mean not having the highest possible framerates , potentially making games appear choppy. You won’t find this to be an issue on all games – and there are plenty of games that run at 60 frames per second on all Xbox systems – but those who demand the absolute best out of their games won’t find it on the Xbox One S or the All-Digital Edition.

Because it doesn’t have any additional features compared to the standard Xbox One S system, the main draw of the Xbox One S All-Digital Edition is its $250 price tag. It’s an easy choice if you’re planning to buy all your games digitally. However, those who benefit from saving money on used games should factor in the price of the games you buy, as well. On the Xbox Store, every game you purchase is treated as “new,” even if it happens to be years old. Prices do decline and there are plenty of sales for digital games, but the prices you can find on used physical games are almost always going to be better . Call of Duty: Black Ops 4, for instance, is currently being sold at the full $60 through Microsoft. On Amazon, the disc version can be found for less than half that.

Xbox Game Pass can help bridge this gap by giving you unlimited access to a huge number of games through a subscription, but ames have also left the service in the past, meaning you can lose access to them unless  deciding to purchase them outright. Should there not be a discount available for the game you want by the time you purchase, that could mean having to pay extra cash just to continue playing the game you were playing before.

The Xbox One S All-Digital Edition is a capable gaming machine for those with 1080p displays.

Another area where that lower price may look a little less appealing relates to the missing disc drive as the Xbox One S All-Digital Edition doesn’t have 4K Blu-ray support. When it first released, the original Xbox One S was considered a worthwhile purchase for videophiles because it offered an inexpensive way to enjoy 4K Blu-ray movies. Since then, the prices for standalone players have dropped, but they still cost above $50 in most cases. If you want to enjoy Blu-ray discs, you may need to purchase one of those players on top of the cost of the Xbox One S All-Digital Edition, and at that point you would have spent more money and have a less-capable system.

The environmental benefit to purchasing games digitally also sounds like it could be a positive, but studies have shown it can actually be worse for the planet based on the size of a game download. Streaming games, which will be possible on Xbox systems in the near-future through xCloud, also won’t help matters here due to the huge amount of energy needed to power data centers.

If you are in need of a second Xbox One for your home or have so little room that you will never be able to store physical media, then the Xbox One S All-Digital Edition will serve you well. It’s a sleek and capable version of the Xbox One that can play its full library of games, and with Xbox Game Pass, you can play a whole bunch of them in very little time.

However, the price difference compared to the standard Xbox One S is still very small – less than the cost of a single game. If you are buying the console purely to save cash, you’ll find it’s actually not the best investment in the long run.

At just $50 more, the standard Xbox One S gives you the same functionality as its disc-free sibling alongside physical game support and 4K Blu-ray capabilities. This gives you the flexibility to choose how to play each game, and if you want to be purely disc-free, you can still do that.

With Microsoft’s Project xCloud game streaming service on the way, it’s feasible that you could continue using the Xbox One S All-Digital Edition for several years. However, Project Scarlett is scheduled to arrive in late 2020, and you can expect most new games after that point to release for the newer system rather than Xbox One.

No. If you have a complete aversion to physical media or want a game console in a second room, you might get your money’s worth,  but the Xbox One S All-Digital Edition will need to be priced lower before it becomes worthwhile beyond those two scenarios.

Topics
Every video game delay that has happened in 2023 so far
AMD vs. Intel: which wins in 2023?
Best Gaming PC Deals: Save on RTX 3070, 3080, 3090 PCs
Fire Emblem Engage bond levels: how to get max Bond Levels fast
Marvel Snap Battle Mode: How to play Marvel Snap with friends
The best video game remakes reinvent the classics, they don’t just revisit them
Best Buy will give you a $10 to pre-order Hogwarts Legacy today
Save $620 on this Lenovo gaming laptop with an RTX 3070
Forspoken settings: change these settings for a better experience
Add 2TB of storage to your PS5 with an SSD and save $70 with this deal
Fall Out Boy concert in Fortnite: start time, island code, and more
Marvel Snap is dangerously close to becoming a pay-to-win game
All missable characters in Fire Emblem Engage and how to get them