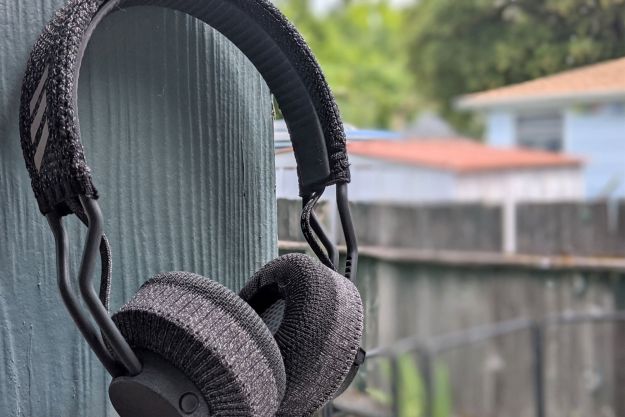 “The Adidas RPT-01 are dedicated almost exclusively to fitness lovers.”

Adidas’ $169 RPT-01 Sport on-ear headphones are different from the competition in several ways, from their functionality to the fabric they’re wrapped in. Sometimes those differences help, and sometimes they hurt. It comes down to who’s wearing them. Athletes may love what these fitness-minded headphones have to offer, but the casual listener may not be as receptive.

The headphones come carefully packaged in a black Adidas box, but other than a USB-C charging cable and the standard manufacturer documentation, there’s nothing else included. The RPT-01 headphones do not come with a carrying case or a carrying pouch, which is disappointing.

Setup was a little quirky. The quick-start guide instructs you to hold the “control jog” button (the one on the right earcup — and, yes, that is the official name Adidas decided to use for it) for 2 seconds to turn the headphones on and put them in pairing mode. For the life of me, I couldn’t get these headphones into pairing mode – at least not initially.

After downloading the Adidas headphones app, I was met with slightly altered pairing instructions. The app tells you to hold the button for 4 seconds, not 2, to enable Bluetooth pairing. It’s a fraction of a difference, but apparently an important one.

The RPT-01 has Bluetooth 5 tech built-in, and under normal circumstances, the connection was solid. Sadly, the range of connection was average at best. During a jog with my fiancée, she wore the headphones, which were connected to my phone that I carried in a fanny pack.

With most earbuds I’ve tested, she can leave me in the dust and still keep a solid connection. With these, she would get about 15 to 20 feet away before encountering connectivity issues. That’s surprising, as we were outside with no obstacles between us.

Design is what makes these cans stand out. They don’t use a plastic or silicone material for their outer cup or band, like you would expect. Instead, the headphones are covered in a mesh fabric, with the exception of the inner band. The fabric isn’t the softest material out there, and it doesn’t make for the most aesthetically pleasing look.

It is, however, well-suited to the RPT-01’s target audience: Athletes. The ear cushions and inner band are washable, which may prove to be helpful after more intense workouts. And while not soft, these headphones do feel durable, giving the impression that they’d be able to handle countless hours in the gym without issue.

Thanks to social distancing guidelines, I still haven’t gotten back to the iron church, so I can’t speak to how well the RPT-01 fare when lifting. They did do well on the handful of runs I brought them along for. They’re heavier than a true wireless earbud alternative, of course, but they don’t have enough weight at 209 gram to significantly impact your cardio session. For reference, one of the most comparable alternatives, the JBL UA Sport Wireless Train, weighs considerably more at 240 grams.

I did feel that they were aggressively tight on my admittedly large head, though. That’s better than being too loose, but if I wasn’t using these primarily for exercise, the pressure would eventually become a nuisance.

I’m of the belief that all headphones and earbuds should have some sort of water resistance because of how they are becoming more deeply connected to our everyday life. That goes double for products meant for exercise. The RPT-01 thankfully doesn’t disappoint with an IPX4 rating that provides sweat and splash protection. The JBL counterpart features that same protection rating.

More impressive is the battery life of the RPT-01, which Adidas claims clocks in at 40 hours of playback. If you used these exclusively for working out and didn’t spend an eternity in the weight room  à la Dwayne Johnson, it’s conceivable that you could get away with charging these around once a month.

Of course, at this price, you’ll likely want to get your money’s worth and wear them when you’re not getting pumped up, too. I’ve had close to a workweek’s allotment of hours with the RPT-01, and I’ve yet to plug in for a charge. That’s some solid juice for the cost. Notably, both the JBL Train and the more expensive Train Project Rock offer just 16 hours of playback between charges.

I enjoyed the functionality of the “control jog” button on the right cup of the RPT-01, which allowed me to pause and resume music with a regular press. A toggle to the right or left let me skip tracks, and toggling up and down took care of volume. In a world where we’ve too often succumbed to the confusion of multi-press functionality, this was an easy-to-use breath of fresh air.

Speaking of multi-press, there’s an action button on the left cup. A single press calls up your preferred voice assistant, which to my understanding can include Google Assistant, Apple’s Siri, and Amazon Alexa. Through the Adidas app, which I found surprisingly useful overall, you can program double-tap and triple-tap functions to pull up specific playlists, artists, or albums through Spotify. This is a neat feature, as long as you’re a subscriber.

At the risk of repeating myself, the RPT-01 are first and foremost fitness headphones, and when it comes to working out, it’s typical to listen to something upbeat with generous servings of low end sound.

Adidas seems to know its audience, because that’s where the RPT-01 feel most at home. Scrolling through most of Spotify’s popular workout playlists demonstrated this, with tracks like Migos’ Walk It Talk It standing out. The RPT-01 have a wealth of bass, and they aren’t afraid to share it.

Move away from the workout playlists, however, and a few sound deficiencies becoem apparent. They’re still reasonably clear, and casual listeners shouldn’t have any issues with the audio, but all those bass-heavy selections hide an average midrange that leaves something to be desired when trying out a wider scope of music. These headphones sound good overall, but they just might not be able to satisfy those looking for truly great sound across multiple genres.

The app does have an equalizer feature with different presets to help mitigate the issue, as well as a custom preset that allows you to adjust frequencies to your desire. I also felt the built-in microphone did its job sufficiently when taking phone calls. At this price, active noise cancellation would have been appreciated, but it’s not a necessity.

The Adidas RPT-01 are what I thought they were – a set of headphones dedicated almost exclusively to the gym rats of the world, with the ideal set of features to match it. They just don’t stack up incredibly well outside of the exercise space.

The $160 JBL UA Sport Wireless Train come the closest to the Adidas in both price and design, but lack the battery power of the RPT-01 and only have Bluetooth 4.1 technology built in. If you don’t need headphones for breaking a sweat, both the $200 Razer Opus and $199 Sony WH-CH710N would be compelling options.

Adidas built these headphones to be able to take on everything fitness fanatics can throw at them. As such, expect them to have some staying power.

Yes. The design and audio quality may not translate outside of working out, but that’s not what these were built for. The RPT-01 Sport are headphones for fitness, and they fit that mold well.