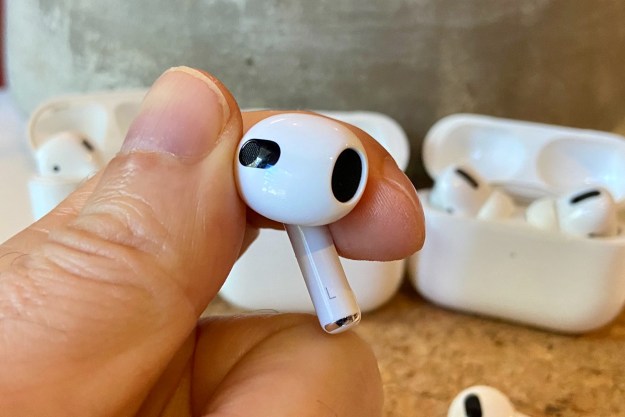 Now that Apple has released its third-generation, $179 AirPods, you’re probably wondering, are they any good? If I own the first or second-gen AirPods, should I upgrade? And, is it still worth the extra money for the $249 AirPods Pro? I’ll save you some time.

The answers are, yes, yes, and maybe. Want to know more? Here’s our full review.

In the Goldilocks zone

The design of the third-gen AirPods — which we’ll now refer to as the AirPods 3 — for all intents and purposes makes them look like the missing link between the original AirPods and the AirPods Pro. That in-between impression is the story of the AirPods 3 in a nutshell: They take the best parts of each of those other models in an attempt to create the perfect middle ground, with that same in-between price. If this was Apple’s goal, I think it succeeded wildly.

Fans of semi-open earbuds no longer have to accept mediocre sound quality.

Even their charging case is a best-of-both-worlds situation, with Qi and MagSafe-compatible wireless charging and yet with dimensions that make it almost exactly the same size and shape as the original AirPods case.

The original AirPods earned a lot of fans for their wire-free convenience, simplicity, and easy integration with the iPhone. But most would admit that when it comes to sound quality, they’re OK at best — barely an improvement over the performance of the wired EarPods that Apple ships with its iPhones. And despite using a semi-open design, just like the original AirPods, the AirPods 3 sound far better.

Head-tracking spatial audio is like sitting in on a studio session with your favorite band.

In fact, as long as you’re in a quiet location, the AirPods 3 sound every bit as good as the AirPods Pro. There’s plenty of clarity through the various frequencies and, much to my surprise, they have a bass response that is both warm and powerful. They can’t compete with closed designs like the Jabra Elite 7 Pro or Sony’s WF-1000XM4, but I put them head-to-head with other semi-open buds like the AirPods, Marshall Minor III, Soundpeats Air 3, Urbanista Lisbon, and the Earin A3, and the AirPods 3 trounced them all. Fans of semi-open earbuds no longer have to accept mediocre sound quality.

Apple has been making a big deal about spatial audio and Dolby Atmos ever since it added tracks to Apple Music that use this immersive format. And while pretty much any set of wired or wireless headphones can enjoy Atmos when listening to select Apple Music songs, the AirPods 3 up the ante with head-tracking spatial audio.

The feature — which the new AirPods share with the AirPods Pro and AirPods Max — takes the already immersive quality of Dolby Atmos music and adjusts some of the song elements in real-time to react to your head movements. The lead vocalist(s) is “pinned” to the direction your head faces, such that when you turn your head one way or the other, that singer’s voice sounds like it’s still coming from the same forward direction. It’s a little like sitting in on a studio session with your favorite band.

A more bulbous (yet super smooth) shape makes them more secure without compromising on comfort.

Like Dolby Atmos music itself, the effect can vary hugely from track to track. But when it’s done right, like on Imagine Dragons’ new album Mercury – Act 1, it’s a wild ride. Older material that has been remixed for spatial audio, like The Rolling Stones classic, Tattoo You, doesn’t fare as well as newer works (sorry Mick and Keith).

This same head-tracking works on movie soundtracks too, and I’d argue it’s an even better use of the tech as it can simulate what it’s like to sit in a full surround sound theater, using just your earbuds.

You may not use head-tracking spatial audio a lot (and you can disable it entirely if you don’t like the way it sounds) but it’s a cool feature that helps to justify the purchase of the AirPods 3 even when there are so many great true wireless earbuds out there.

Another common complaint about the first AirPods is that even though they’re very comfortable, they just don’t feel very secure in your ears. This, along with their lack of any official water or sweat protection, has kept some folks from using them for running or other high-impact activities.

The AirPods 3 manage to (mostly) address both concerns. With a more bulbous (yet super smooth) shape, they make much better contact with the skin of the outer ear and that — along with their shorter stem — makes them more secure without compromising on comfort. If you like the way the AirPods 2 fit, you should be quite happy with the AirPods 3. They’re not as secure as the AirPods Pro, which means you may need to adjust them periodically, especially if you use the force sensor controls a lot — pinching the stems to activate it can inadvertently move the earbuds around, especially while running.

But they do have an IPX4 rating for water resistance, so go ahead and get as sweaty as you please.

While the AirPods 3 sound quality really is remarkable given their semi-open design, with no silicone ear tips, they can’t provide much of a seal, and lots of external noise makes its way into your ears along with your music. In even moderately noisy environments, you’re forced to crank the volume to hear your podcasts or phone calls.

This is where the AirPods Pro have a huge advantage. Not only do they provide better passive noise isolation thanks to those silicone ear tips, but they also have active noise cancellation (ANC) which can silence all but the most intrusive outside sounds.

On the other hand, because the AirPods 3 let so much sound in, there’s almost no reason to remove them to have a conversation, and thus the lack of transparency mode is no big deal. If you want to be more aware of your surroundings, simply pause the music.

Call quality on the original AirPods was never perfect, but it was always perfectly adequate. That remains true of the AirPods 3. You should have no trouble being heard even in moderately noisy places. Clarity isn’t quite as good as you’ll get with the AirPods Pro, but it’s good enough for most situations.

We’ve taken Apple to task over the AirPods and AirPods Pro battery life because so many other true wireless earbuds manage to offer longer play time on a single charge and more total battery time too. So it’s great to see that Apple has managed to eke out just a bit more from the AirPods 3’s battery: Six hours per charge, and 30 hours of total time when you factor in the charging case.

That’s still shy of some of the more long-lasting earbuds, but it’s still the best we’ve seen in a set of AirPods. Given that they still support hands-free Siri (one of the biggest draws on battery life), it’s a pretty big accomplishment.

The fast-charge feature gives you about an extra hour of listening time if you charge the buds for five minutes.

With way better sound, a bigger battery, a more secure fit, wireless charging, and head-tracking spatial audio, the AirPods 3 are a big step-up from the second-gen AirPods and an upgrade that all AirPod owners should consider.

The only set of semi-open earbuds that sound as good as the AirPods 3 are the Oddict Twigs. However, they lack wireless charging, head-tracking spatial audio, hands-free Siri, and their three-hour battery life is among the lowest we’ve ever seen.

A better alternative is the first-gen Apple AirPods Pro, which you can still routinely find on sale for between $180-$200 (the updated version with MagSafe charging may cost a few dollars more). With ANC and transparency mode, a more secure fit, and better sound, they’re the logical step-up from the AirPods 3. But a lot of folks don’t like the feeling of silicone ear tips, which brings us back to the AirPods 3.

With IPX4 water protection and very solid build quality, I’m certain the hardware itself will last for many years of use. But Apple has had problems in the past with the batteries in its AirPods losing a lot of their capacity in the first two years. I can’t say if Apple’s new optimized battery charging feature will significantly reduce this issue, so if you’re concerned about it, it might be worth buying Apple Care to extend your warranty from one year to two years.

If you’re an Apple device user, absolutely. The AirPods 3 are a worthy upgrade from the first AirPods. Android owners won’t be able to take advantage of features like head-tracking spatial audio or hands-free Siri, making them less appealing for thse folks.

Topics
BluOS will be updated to 4.0 with a fresh look, new features
The best Bluetooth speakers for 2023: Marshall, Sonos, JBL, and more
NAD’s CS1 adds wireless streaming music to any audio system
Bowers & Wilkins’ wireless earbuds get better battery life and longer range
YouTube TV: plans, pricing, channels, how to cancel, and more
Apple’s MLS Season Pass is about more than just streaming games
Best 75-inch TV deals: Get a large screen for the Super Bowl
Flash sale drops the price of this 55-inch QLED 4K TV to just $370
Netflix expands its spatial audio, number of devices that can download content
Sony’s 2023 AV receivers are Sonos-ready and work with wireless speakers
Rode’s NTH-100M headphones are built for gamers
The best movies on Disney+ right now (February 2023)
Perfect for the Super Bowl, Samsung’s Frame TV is $1000 off