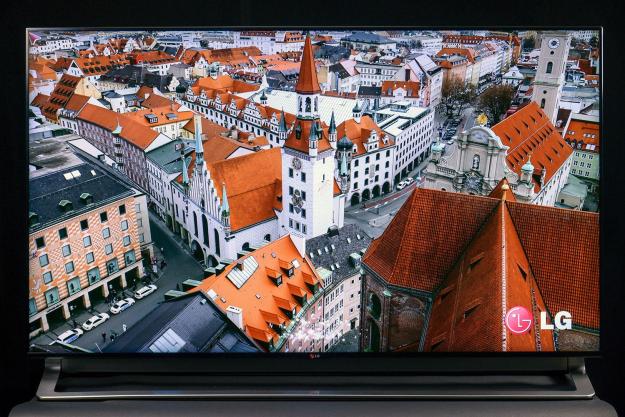 “While LG's LA9700 is an oustanding LED TV, a lack of 4K content and lofty price point are deal breakers for us.”

LG LA9700 Series information: This review is based on our hands-on experience with the 65-inch 65LA9700 TV. However, our observations also apply to the 55-inch 55LA9700. According to LG, the two sets differ only in dimension and weight and offer identical features and performance.

If you’ve landed on this review, then you’re probably either an early adopter with an itch to own an Ultra HDTV before any of your friends, or you’re just dying to know how these first-gen Ultra HDTVs look to the eyes of someone who stares at TVs for a living.

Frankly, we’ve been curious, too. Although we’ve gotten some good exposure to 55-inch and 65-inch Ultra HD 4K TVs at trade shows and press events, those are neither the right times nor places to try to form a qualified opinion. So, we figured we’d just keep patient until we could get our hands on one and live with it for a few weeks, so that we could tell a story about what it’s really like to have an Ultra HDTV in your home.

Get ready to hear a lot about 4K upscaling in the coming months.

As it would turn out, LG was the first to offer up one of its premium Ultra HD sets for us review. And that’s no small thing, considering how expensive these TVs are. With a street price running around $6,000, the 65-inch LA9700 series Ultra HDTV has come down a bit from its original suggested retail price of $8,000; but let’s face it, this is still a pretty pricey TV – almost three times that of LG’s largest 1080p LED LCD TV, the 60LA8600.

The justification for that price point isn’t just the TV’s Ultra HD resolution (though that’s a very big part of it). LG has also packed this particular model with a full array of locally-dimmed LED backlights and a motorized speaker system to sweeten the pot. So, the TV ought to look and sound better than LG’s top-of-the-line 1080p TVs; a lot better. Let’s see how it did.

When turned off, the LA9700 doesn’t necessarily look like one of LG’s flagship TVs. While it is attractive enough, it doesn’t sport the ultra-thin bezel the LA8600 series does. At 1.61 inches deep, it doesn’t have quite as thin a profile, either. But it’s still remarkably thin, and considering the extra depth is due to a full array of backlights, we’re more than just OK with it.

As we set the LA9700 up, we were struck by its weight – nearly 90 pounds without its stand. Definitely have a friend handy to help get this TV mounted on the wall or placed on its stand. Speaking of the stand, we were a little concerned that it only used four small security screws, but a slotted locking mechanism at the back made for an extremely secure fit. Not once were we ever concerned the TV might tip over, either. The stand itself is made of lightweight but rigid plastic – plenty strong enough, but prone to scratches.

In the box with the TV was slick black box, very neatly packed with accessories, including: four pairs of LG’s passive 3D glasses, the latest version of LG’s Magic Motion remote, batteries for the remote and some breakout cables for legacy connections.

Get ready to hear a lot about 4K upscaling in the coming months. Right now, 4K content is scarce to non-existent. While Sony can always point to its 4K download service (which only works on Sony’s 4K TV’s) all of the other Ultra HD manufacturers need to be able to point to something that makes an Ultra HD 4K purchase seem reasonable, even though there’s no sweet 4K stuff to watch on them (save a few YouTube vids which – sorry – do not count). The LA9700 (and every other Ultra HD TV in production) does include a resolution upscaler, which allows it to take 1080p or lower resolution content and boost it up to 4K. The marketing angle is that even standard HD stuff will look better upscaled on an Ultra HDTV than it does on a comparably-sized 1080p TV. Naturally, each manufacturer is going to claim theirs is superior, and LG is no exception.

LG has also packed this particular model with a full array of locally-dimmed LED backlights and a motorized speaker system to sweeten the pot.

Perhaps the LA9700’s most unique feature is its speaker system. First, we have to give LG credit for working to address the issue of terrible-sounding speakers in today’s flat-screen televisions. The LA8600 was a vast improvement on the industry norm already, but the LA9700 has one of the best-sounding on-board speaker systems available in a TV under $10,000. It’s fun to show off, too, but not in the way you might think.

When powered down, the LA9700’s speakers are invisible. But when you turn on the TV, a small, motorized speaker array drops down from inside the television. The only drag is that the speakers are so stealthy that it’s easy to miss them coming down entirely. Sometimes we had to point them out to friends and family as we turned on the television.

The speaker array isn’t solely responsible for the TV’s sound. What really fills things out is the set’s rear-firing subwoofer, which creates far more bass than you’d expect. With the LA8600, we felt the sub got boomy at times; but the LA9700 didn’t give us that problem. The speaker system made movies more fun to watch without a separate sound system, but music-based programming benefited the most.

The LA9700’s most critical feature, though, is its full array of locally-dimmed LED backlights. Rather than rely on a series of LED’s lining the edges at the top and bottom or sides of the panel, this TV gets a whole array of them positioned behind the entire surface area of the panel. The TV can then turn on and off the LED’s as necessary to help achieve superior black levels. By doing so, LG can also use a different kind of LCD panel, which allows for a much wider viewing angle without sacrificing light control.

Naturally, this TV has every bell and whistle you could dream up. It’s got a built-in camera for Skype video calls, voice recognition software, dual-view 3D capability that allows two viewers to see distinctly different images (really cool for two-player gaming), a dual-core processor for faster menu navigation and Internet browsing, built-in Wi-Fi and all the best video-on-demand (VoD) apps.

We wish every high-end LED LCD TV had full-array, locally dimmed backlighting. The difference in black levels and overall picture quality between LG’s top-tier LA8600 and this LA9700 is night and day. This is the TV we wish the LA8600 had been.

LG provides three different levels of local dimming, and we found the medium setting provided the best overall results, with enough “halo” minimization to keep LG’s Magic Motion cursor from becoming a distraction on predominantly black screens. Blacks weren’t quite as inky as what you get with plasma, but they were certainly dark enough to dazzle all but the most scrutinizing viewers.

The LA9700’s color capabilities are also outstanding, for both 1080p and 2160p content, though the latter appeared to offer slightly deeper color with more subtle gradations.

As for 4K content: If there is any lingering doubt in your mind as to whether the difference between 4K and 1080p can be seen at 55 or 65 inches, let us settle the matter here and now: The difference is not subtle, it is striking. Even the untrained eye can appreciate the higher density of smaller pixels that results in sharper edges and higher levels of detail. If 4K is the future of television, then we’d say the future looks pretty bright.

In fact, the future is so bright, we might just have to wear shades more often. We found that 3D content on this set looked really good. We didn’t tire of looking at it so quickly, and, once again, we appreciated the flicker-free nature of LG’s passive 3D approach. Some see 4K as 3D revisited – a way to stoke high-margin TV sales without providing any real user benefit. We disagree. Actually, we think 4K could end up rescuing in-home 3D.

Unfortunately – and it saddens us to have to say this, really – buying this TV, and almost any other Ultra HD/ 4K TV for that matter, makes no sense right now. HD content, which is the best you’ll get for now, doesn’t look substantially better after being upconverted for an Ultra HD set.  To be clear, this is not an issue specific to this TV. Our lack of enthusiasm is centered around upscaling in general. Think of a DVD upscaled to 1080p; it’s still very obvious that it is a DVD. On a less drastic scale, the same can be said for 1080p upscaled to 4K. It looks better than if it hadn’t been upscaled at all, but nowhere near as good as native 4K content.

Plus, because most Ultra HDTVs are LED based, high-end plasma TV’s are always going to look better. Plasma TVs are less expensive, too. The Panasonic ST60 series costs roughly a third the price of a comparably sized Ultra HD TV, and it looks better displaying 1080p content because of its superior picture quality (not resolution) characteristics.

4K content is right around the corner. We think we’ll be seeing plenty of it at CES 2014. But by the time it comes rolling around to the mainstream, the replacement to this year’s series of Ultra HD TVs will have been introduced, and they’ll probably be less expensive.

LG deserves recognition for developing an LED LCD TV that can hang with the best of them. Its picture quality is outstanding and its 4K performance is dazzling. And while it isn’t LG’s fault that there’s no 4K content to enjoy on its Ultra HDTV, that doesn’t change the fact that this TV is simply too far ahead of its time. As great as the LA9700 is, we simply can’t recommend buying it with so many excellent, much less expensive options available.

Still, it is exciting to see what the future in TV holds, and the LA9700 proves that LG is very much a major player in the game.

Best TV Deals for September 2022
Best OLED TV Deals: Get a Sony 4K TV for $800
Best QLED TV Deals: Get a 55-inch for $320
Best Walmart TV deals for September 2022
The best superhero movies of all time
Marantz’s new Cinema series AV receivers are a stylish way to go 8K
The best superhero TV shows of all time
What’s new on HBO and HBO Max and what’s leaving in October
These giant TVs are all under $300 during this Walmart TV sale
Best Prime Day Deals: What to expect from the October event
Sennheiser Ambeo Soundbar Plus hit by unforeseen technical delay
The best TVs of 2022: our favorites from Samsung, LG, Sony, and more
Apple AirPods Pro 2 vs. Google Pixel Buds Pro