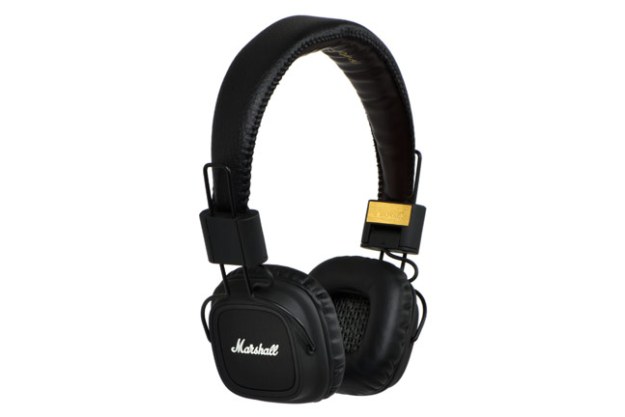 “The Marshall Major headphones offer an aesthetic appeal that is uniquely Marshall and bring with that look a very live sound that we think many listeners will appreciate.”

It seems like everyone and their cousin’s brother is making headphones now. It also seems like we’ve made a similar comment in almost every headphone review we’ve published over the last couple of months. In fact, both statements are true and we think we’ve deduced why. It’s all based around a concept we’ve decided to call “bandwagon headphones.”

Bandwagon headphones are headphones that come along because a company, often not even related to the audio industry, suddenly decides it wants to tap the cash cow that is the mobile device accessory market. It would seem, on the surface anyway, that our headphone maker du jour, Marshall, would fit in that category.

At least Marshall has a storied history and legendary reputation in guitar amplification. As such, the British company has been and continues to be involved in sound and music in a very prolific way. With that said, we have to point out that Marshall, in its nearly 50-year history, has never made a headphone before.

And, in fact, it still hasn’t. All of the permutations of what are essentially two Marshall headphone models are made by the Swedish headphone maker Zounds, (which, by the way, also makes cans for Urban Ears).

That Marshall is branding another company’s product is not necessarily an indication that the Major headphones are just an off-the-shelf product with a Marshall makeover. In fact, based on some sonic differences between the Marshall Major and the Urban Ears Plattan, we’re pretty sure at least a little custom voicing has been applied.

In our Marshall Major headphone review, we dig into what makes these headphones distinctly Marshall, dissect their sound quality and determine whether these ‘phones do the Marshall name justice.

The stylized box for the Major headphones looks as if it might contain a mini Marshall amplifier inside. To get to the goods, you have to lift the top portion of the box as if uncovering a huge crate. Inside the base of the box are nestled the Major headphones. Accessories include a ¼-inch (6.3mm) headphone adapter. Marshall didn’t include a carrying pouch or storage case, but based on the rugged feel of the headphones, we don’t think one would be necessary for anything but the sake of convenience.

Marshall’s excellent branding efforts are replete throughout the Major’s design. The vinyl covering on the headband is the same stuff Marshall uses on its guitar gear and has the same texture as well. The earcups are intentionally square, built of some seriously tough resin material and bearing Marshall’s telltale script logo. On the black Major and Major FX models, the logo is in white. On the newly released white models, the colors are inverted.

The roughly four-foot-long cord, which is fixed on one end to the left earcup, has a small in-line mic with one-button control located just four inches below the cord’s termination, placing the mic in very close proximity to the jaw. Just below the mic, the cord is coiled, which allows a generous amount of strain relief and flexibility of movement — perfect for those times when your phone or media player needs to be tucked in a bag, backpack or purse.

The ear pads are hinge-mounted, like an old-school set of studio headphones. To size up the headphones, the mounting hinges move up and down through pieces mounted at the end of the headband. This design approach also allows the earcups to be collapsed inward for more compact storage.

While the headband’s padding isn’t particularly plush, the padding in the earcups is more substantial and covered with a very soft, leather-like material which had us thinking the cans would probably stay comfortable over longer listening sessions.

Since the Urban Ears Plattan are made by the same company as the Marshall Major, we decided to make a bit of a comparison, both in terms of build and sound quality. As for build, we noticed that the earcup mounting hinges, internal wiring, in-line mic and headband components are identical. The headband wrapping, earcup padding and, we suspect, drivers are different — they certainly sound worlds apart.

Straight out of the box, the Marshall Major sounded like they needed some serious break-in time. In fact, the headphones as a whole benefit from some working over. Like a brand new baseball glove, the Marshall Major comes out of the box feeling and sounding stiff. Allowing them some play time on their own (we ended up giving them about 40 hours) and working them around in our hand, stretching the headband a bit to loosen it up, made for a much more comfortable listening experience all around.

Our initial impression of the Marshall Major was that they were far too midrange intensive; so intensive, in fact, that we found ourselves having to take them off for some rest periods. Generally, this is a bad sign. However, as the headphones got some play time, the sound improved dramatically. Things became more balanced, with bass rounding out the bottom end with better presence, and the highs achieving a more realistic and much less compressed sound.

Still, the Major’s sound is clearly intended to be in your face. No one will ever accuse the Major of sounding laid back. Vocals come across rich and full of body, even at very low volumes. High frequencies are bright and full of texture, but stay well under control under normal volumes. Bass response is accurate — if it’s on the recording, you hear it and feel it. The sound never seems artificially bloated; a problem we run into often, particularly with supra-aural (on ear) headphones like the Major. If we had to pick a single word to describe the Major, it would be “live.” In fact, we felt the headphones sounded best when reproducing live recordings.

The Marshall Major certainly benefited from some quality amplification. The headphones sounded much less compressed when driven by our NuForce uDAC-2 and Headroom Micro Amp than when played directly off of the iPod. This came as a surprise, considering the Major seem relatively easy to drive. Also, as we turned up the volume on our iPhone, we heard a fair amount of distortion, which was most evident around the upper mids and lower treble. This effect was minimized with better amplification, but still present, albeit to a much lower degree.

Compared to the Urban Ears Plattan, the Marshall Major headphones sounded livelier and open for a closed-back headphones. Ironically, they were also just a tad more comfortable. Compared to the SOL Republic Tracks headphones, the Major again sounded livelier, and had more accurate bass, but the SOL Republic ‘phones were far more comfortable to wear and listen to over long periods of time.

Of course, sound quality is only half the battle. In order for a headphone to be truly great, it needs to be comfortable for long-term wear. This is an area where both the Marshall Major and the Urban Ears Plattan suffer. Something about the headband and mounting structure applies an amount of force on the ears and crown that initially comes off as a “secure” feeling. But the longer they are worn, the more the pressure wears on you. The ear pad material doesn’t help things either. While it was great at providing passive noise isolation, it led to some problems, eventually. After about 45 minutes or so, we felt the heat building up and experienced the urge to let our ears breathe for a while.

The Marshall Major headphones offer an aesthetic appeal that is uniquely Marshall and bring with that look a very live sound that we think many listeners will appreciate. However, their tendency to compress sound when driven with lower quality sources and the long-term comfort problems we experienced hold us back from making them a recommended product. These ‘phones might best suit listeners that enjoy music in shorter spurts and don’t necessarily need to crank the volume to enjoy it.