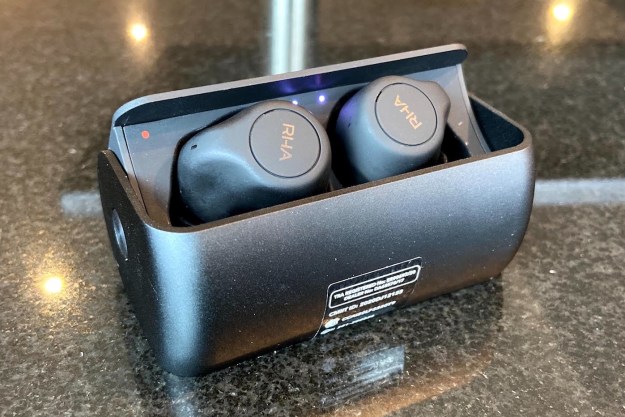 “Great sound and a unique shape are held back by a weak battery and a high price.”

At the high end of the true wireless earbuds category, you’ll find some outstanding products like the Sennheiser Momentum 2 True Wireless, the Master and Dynamic MW07 Plus, and the Bose QuietComfort Earbuds. So if a company wants a seat at this table, it’s going to have to bring its A-game.

That’s RHA’s aspiration for its new $300 TrueControl ANC, a set of noise-canceling earbuds that defies conventional thinking in their shape, their touch controls, and their charging case. But are these innovations enough to earn the TrueControl our recommendation? Let’s check ’em out.

With the exception of a few very tiny plastic protective stickers, the TrueControl’s packaging is 100% recyclable paper and cardboard, which I think is highly commendable.

Inside the box, you’ll find the TrueControl ANC earbuds already in their charging case, a USB-C charging cable, and a record-setting 10 pairs of eartips, three of which are memory foam, made by Comply.

Typically, true wireless earbuds are built in such a way that you insert the tip into your ear canal and then twist the earbud back and forth until you find that magical combination of comfort, security, and seal. The RHA TrueControl ANC take a different approach. Made from a grippy, matte black plastic, the earbuds are asymmetrically shaped and contoured so that they can only be inserted directly into the ear.

The touch controls are among the best I’ve tried.

Once seated, that shape prevents any twisting or turning. It’s a bit of a risky design decision given how differently everyone’s ears are shaped, but RHA believes it has designed them in such a way that they’ll fit “wholly in the ear.” Though they stick out a bit from your ears, they’re no bulkier than the Sennheisers and considerably less bulky than the Bose QuietComfort Earbuds.

The touch controls are also a departure from the norm. They look like physical buttons, but they’re actually tiny gesture-based touchpads that can be swiped or tapped.

The charging case is identical to the one RHA used for its TrueConnect and TrueConnect 2 earbuds — a stunning and unique rotating barrel with a black aluminum frame — but this time it features wireless charging. A tiny, three-LED battery life display on the barrel lights up when you open the case. Unfortunately, the unusual choice of design and materials makes the case big and heavy — with the earbuds, it weighs 3.8 ounces, versus only 2 ounces for the Jabra Elite 85t.

The edges of the aluminum frame could scratch other objects if you’re not careful with where you stow it. Another peculiarity of the case’s design is that if you open it with the plastic barrel facing up (the only way to do so if you want it to sit flat on a surface), the earbuds are swapped — the left one sits on the right side and vice versa.

Take a good, long look at the earbuds and case when they’re new in the box — it will probably be the last time you’ll see them without fingerprints. The slightly rubberized matte plastic is an absolute fingerprint magnet.

The earbuds are easy to remove and replace and are held in their charging sockets by strong, but not overly powerful magnets.

Because of their unusual shape, the TrueControl ANC have a large contact surface. This means that they’ll probably feel like they’re “filling” your ear more than other earbuds like Apple’s AirPods Pro, which have a much smaller profile. Once you get used to it, however, it’s surprisingly comfortable. It’s also very secure, eliminating the need to rely on earfins or other support structures like the kind you’ll find on the Bose QuietComfort Earbuds.

RHA’s inclusion of a huge array of eartip sizes and types is a big reason why I was able to find a good fit, and it should be the industry standard. After using the default silicone eartips for a few hours, I eventually swapped them for the largest size of Comply foam tips, which I found provided even greater comfort and much better sound quality (more on that below).

I can’t tell you with 100% confidence that the TrueControls will fit you, but given how many tips you can choose from, your odds are far better than they might be if RHA had simply offered the same three sizes as the vast majority of true wireless earbuds. Yes, having a bunch of extra tips that you’ll likely never use is a bit wasteful, but it’s better than deciding to return the earbuds because you can’t get them to fit.

The touch controls are among the best I’ve tried, probably because — unlike other so-called touch controls — they use a capacitive touch surface, not a motion sensor, to detect when you’re using them. This not only makes individual taps easy (because you never have to worry about how hard you’re hitting them), but it also enables the TrueControl’s swipe-based gestures.

Once you find the set of eartips that give you a good seal, the TrueControl ANC sound very good.

Not sure you like the swipe method of control? The RHA app lets you customize it, with the ability to choose swipe or tap gestures for volume, track skipping, and ANC mode, as well as which earbud is used to perform these tasks.

The infrared wear sensors also work very well at detecting when you’ve removed an earbud, quickly pausing the music and starting it again when you reinsert the bud.

Once you find the set of eartips that give you a good seal (another reason why I love that RHA includes so many), the TrueControl ANC sound very good. Using the factory EQ provides a very satisfying balance of frequencies, with plenty of warm low-end bass, detailed midranges, and clear highs. The RHA app lets you adjust these settings with an additional four presets, but there’s no way to create your own — a surprising omission given how standard this feature is on so many other high-end models (and even a few budget-friendly ones).

Voices, more than music, can be drowned out by vehicles and the TrueControl handily kept those interruptions at bay.

Stereo imaging is well-rendered, and I especially enjoy the bass response’s resonant and authoritative feel. But as good as they sound — and I do think most people will thoroughly enjoy them — I don’t think they perform quite as well as some of their direct competitors.  The $230 Jabra Elite 85t and $230 Sony WF-1000XM3 both offer a wider soundstage and greater overall clarity, especially for vocals. To be clear, it’s not a huge difference, and you’d have to listen to the same tracks over and over, swapping back and forth between these models as I did, in order to pick out the subtleties.

If you’re an Android user, you get the added benefit of the aptX Bluetooth codec, which can — under the right circumstances — offer better audio quality than SBC or AAC, though this difference is negligible when streaming very high-quality sources like Tidal HiFi.

The RHA TrueControl ANC do a very good job of canceling out external sounds. One of my favorite torture tests is to wander busy streets listening to podcasts. Voices can be easily drowned out by passing vehicles more easily than music, and the TrueControl handily kept those interruptions at bay. When sitting in an environment with persistent noise like a loud fan or vacuum, they don’t exhibit the astonishing cone-of-silence effect that the AirPods Pro deliver, but I’ve yet to encounter another set of ANC buds that can. High-frequency sounds can still push their way in, but low frequencies are very effectively nullified.

Curiously, the TrueControl do such a good job of passive noise isolation (especially when fitted with the Comply foam tips), you may not feel the need for ANC. But you will feel the need for the ambient mode, which is very well executed. This can be selected as always on, or only for a short period by tapping and holding the left earbud for quick-ambient mode. You can adjust how much sound gets in within the RHA app.

ANC seems to pose a serious problem for the battery life of true wireless earbuds. RHA’s non-ANC TrueConnect 2 get an excellent 9.5 hours of playback and 44 hours of total battery life with the included case, but the TrueControl barely meet what I’d consider the minimum for stamina, with only five hours per charge and 20 hours total with the case. RHA doesn’t say how much longer they will last if you disable ANC.

By comparison, the Sennheiser Momentum True Wireless 2 get seven hours per charge and 28 total with the charging case.

In this price range, only the Bose QuietComfort Earbuds turn in a worse performance, with six hours per charge and just 18 hours of total playing time.

A 14-minute fast charge will get you an extra hour of life, which is about average.

Call quality on the TrueControl ANC is good, but not great. Callers were able to hear me with acceptable clarity, but background sounds — even moderately loud ones — tended to interfere.  If call quality is a top consideration, the Bose QuietComfort Earbuds are a much better choice.

Curiously, I could not get the microphones on the TrueControl to work with voice-recording apps on either iOS or Android.

A solid set of features matched with great sound quality and good ANC make the RHA TrueControl ANC a great set of noise-canceling earbuds, but their unusual shape and high price might keep them out of the running for some folks.

Because of the TrueControl ANC’s $300 price, many of the top noise-canceling models will be strong alternatives, especially if price, battery life, and call quality are among your chief concerns. This includes the $230 Jabra Elite 85t, $230 Sony WF-1000XM3, $280 Bose QuietComfort Earbuds, and if you’re an iPhone user, the $249 AirPods Pro.

The RHA TrueControl ANC and their charging case are super-solidly built and I expect them to last many years. RHA backs them with a three-year warranty, which is easily the longest factory warranty in the industry. With an IPX4 rating for water-resistance, they should be able to cope with a moderate amount of sweat with no problems.

Yes. Though expensive when compared to the competition, the TrueControl ANC sound great, offer a very secure and close fit, and do a decent job of noise cancellation.

Topics
The best waterproof Bluetooth speakers for 2023
BluOS will be updated to 4.0 with a fresh look, new features
The best Bluetooth speakers for 2023: Marshall, Sonos, JBL, and more
NAD’s CS1 adds wireless streaming music to any audio system
Super Bowl 2023 halftime show: who’s performing?
The best indoor TV antennas for 2023
The best VPN for streaming for 2023
Marshall’s latest Bluetooth speaker has four drivers for 360 sound
Showtime is being merged into Paramount+
Sling is now 50% off — stream live sports without cable
Klipsch follows the success of The Fives with The Sevens and Nines powered speakers
Everything leaving Hulu in February 2023
Peacock does away with free tier for new subscribers