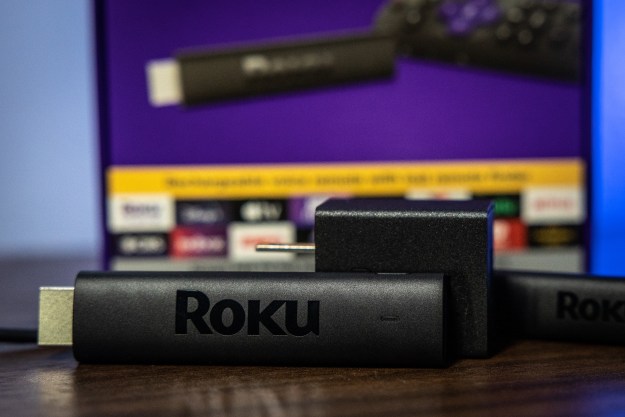 “All the specs you want in a streaming stick, with the price to match.”

There’s a reason Roku is the biggest streaming platform in the United States. OK, there are a few reasons. That it’s inexpensive is one. Its priciest traditional streaming product (not counting the newfangled speakers) is about $100 — and that’s before you take any sale pricing into account.

In reality, though, the $50 mark is more of the sweet spot. And that’s where we find ourselves with the new Roku Streaming Stick 4K, and its close cousin, the Roku Streaming Stick 4K+. Both are part of the Fall 2021 refresh, and both are going to play a major part in the Roku lineup going forward — even though they’re also not actually the most important thing for Roku in terms of the company’s overall business strategy. Yes, we’ll get into those weeds a tiny bit below.

Streaming Stick 4K and the secret of Roku’s success

If you’ve never given Roku a go before, here’s the short, short version: It’s a company that has a series of devices — “streaming sticks,” if you will, though the hardware lineup is definitely more than that — that are inexpensive and easy to use so that you can watch just about any streaming service you could want to watch. Roku also is putting a lot of weight behind The Roku Channel, which is its advertising-based channel that features dozens and dozens of series and shows and movies. One downside,  and it’s one that stretches across the entire Roku ecosystem, is found here. Advertising means tracking. And tracking means trading information on you and what you watch with Roku. In exchange, you get shows and affordable products. That’s the deal.

The hardware is available at a number of prices, none of which breaks the bank. The least expensive option is the Roku Express, which is now the only one that doesn’t support 4K resolution. The Roku Streaming Stick is at the top of the inexpensive part of the lineup, and it’s been refreshed a tad for 2021.

The internals are updated, but otherwise the Roku Streaming Stick 4K is the same Roku experience — just better.

What’s new is what we typically call “speeds and feeds.” That’s tech-speak for important-but-not-exciting-improvements to the internal components. Roku says the new quad-core processor is up to 30% faster. That’s just numbers on paper, of course. And unless you’re running things side by side, you’ll be forgiven if you say “I can’t tell anything.”

But when you combine it with some of the software improvements it has helped the streaming services implement over the past couple of years — and the new Roku OS 10.5 operating system — it does make a marked difference. Incremental, yes. But, again, that’s a good thing.

Wi-Fi also is getting a little bit of a boost in the new hardware. Technically it’s running Wi-Fi 5, aka 802.11ac. That’s the previous-generation Wi-Fi standard, but it’s also far fast enough from the perspective of speed, and probably just fine for most people who have no idea (nor care to know) how their home network actually works. It’s also using MIMO dual-band, if that’s the sort of thing you worry about. If you don’t worry about it, that’s OK. You still want it. Roku also says it’s reworked the radios and antennas on the hardware side, and you’ll see better access point selection in the latest operating system. So there’s that.

One nice touch here — and it’s something I like over, say, the Amazon Fire TV Stick 4K Max — is how the power cord is where the wireless antennas are tucked in, which is important to note. It is, however, lacking an HDMI extender in the box, and that could be a problem for some TVs.

Elsewhere on the specs front, you’ve got Dolby Vision and HDR10 for high dynamic range, and Dolby Atmos for audio. Of course, you’ll need a TV and sound system that can handle those standards, but that’s a lot of licensed firepower in a $50 device.

Otherwise, it’s pretty much the same Roku experience you’ve likely been enjoying for years. It still works great. Just a little better. And it’s still the only platform to give you access to Amazon Alexa and Google Assistant, in addition to Roku’s own assistant. Plus you can still hit up Apple’s HomeKit or AirPlay 2.

Putting the Plus in Roku Streaming Stick 4K+

Roku in the spring of 2021 introduced the Roku Voice Remote Pro. It still looks and feels like the premium Roku remote, with the headphone jack for private listening, and customizable buttons for voice commands in addition to the new hands-free mode. But this one ditches the replaceable batteries for a rechargeable setup. Better for the environment, bad if you hate occasionally recharging your remote control.

It’s deceptively light, which probably is only a thing if you’re used to the voice remote with replaceable batteries. But it’s also not insignificant, shedding about 30% of the weight of the older remote with a headphone jack to get things down to 2.8 ounces. That doesn’t really make up for the fact that it uses Micro USB for charging, which is darned near unforgivable in 2021. It’s far past time to rip off that bandage.

The Voice Remote Pro also has a feature that helps you find the remote when you lose it. Which is nice.

It was a little odd to see a screen on first boot instructing me to install the batteries into the remote before paring it. That’s a very small nitpick in what otherwise is Roku’s excellent onboarding process. But it’s a dumb one that Roku should have caught before shipping the Streaming Stick 4K+ to reviewers. That said, it’s entirely possible that it’ll be fixed for retail setups. But don’t be surprised if you see that confusing screen. The + doesn’t have any batteries to install.

Roku handles the idea of an always-listening remote the right way.

Roku does, however, make up for that misstep by how it handles the hands-free mode. If you don’t want a remote control that’s always listening for your command, you can hit the slider button to turn it off. And Roku explicitly spells that out in one of the first onboarding screens — and requires you to acknowledge the feature before continuing setup. The on-off slider is color-coded, and the remove gives an audible alert when you turn the mic on or off in addition to an on-screen notification. Very nice.

Speaking of the hands-free voice control, it works just fine. Say “Hey, Roku” and then a command, and it does so quickly. In other words, it works, and it works well.

Is that worth the $20 premium over the Streaming Stick 4K? It’s your call. But do note that the Roku Voice Remote Pro costs $30 if you were to buy it on its own.

That’s a good thing, actually. It shows that what Roku does works. It works for Roku as a company — providing low-cost hardware that still makes money — and it works for you as the customer, giving you an easy way to watch the things you want to watch.

Just know that a big part of the Roku strategy going forward is based in advertising, both in traditional display ads on the home screens as well as ads sold on The Roku Channel. In fact, in the second quarter of 2021, Roku made about $532 million in the “platform” category — basically everything but hardware — and $113 million in the “player” category.

Going forward, it really is more about what Roku’s able to give you — whether it’s on The Roku Channel or some other streaming service from which Roku takes a cut — and less about what you’re watching it on. The Roku Streaming Stick 4K is a commodity. It’s the one I’d buy if I’m looking to spend less than $100, but it’s also not something I’d think too long and hard about, nor is it meant to be.

Sure. Roku has a bevy of devices that all work the same but bring different specs and features to the game. If you just have to be plugged in with Ethernet or have expandable storage, for example, check out the latest Roku Ultra. If Roku just isn’t your thing, or you don’t like the idea of what effectively is now an advertising company being in charge of your viewing habits, then maybe the Amazon Fire TV Stick 4K Max is for you.

Or if you want more power and a simpler experience — something that’s going to last for far more years than you might expect — then check out the newest Apple TV 4K. Or if Apple just isn’t your thing, then Nvidia Shield and Android TV may be the way to go.

Basically, if it plugs into a TV, it’s an alternative. Dealer’s choice.

Can’t tell ya. It’s a piece of plastic, not a plant.

Sure. If you love Roku and don’t want to spring for the better Roku hardware, this is what I’d get.

Topics
The best ultra short throw projectors for 2023
Best 4K projectors for 2023
The best Bluetooth speakers for 2023: Marshall, Sonos, JBL, and more
NAD’s CS1 adds wireless streaming music to any audio system
The best headphones for running in 2023
Amazon adds audio personalization to Echo Buds 2
Bowers & Wilkins’ wireless earbuds get better battery life and longer range
Beats Studio 3 headphones are $120 off today at Amazon
How to watch Puppy Bowl 2023
BluOS will be updated to 4.0 with a fresh look, new features
Samsung accidentally reveals price of its 77-inch QD-OLED TV
The best QLED TVs for 2023: bring on the brightness
The best OLED TVs for 2023: from LG, Sony, and Samsung