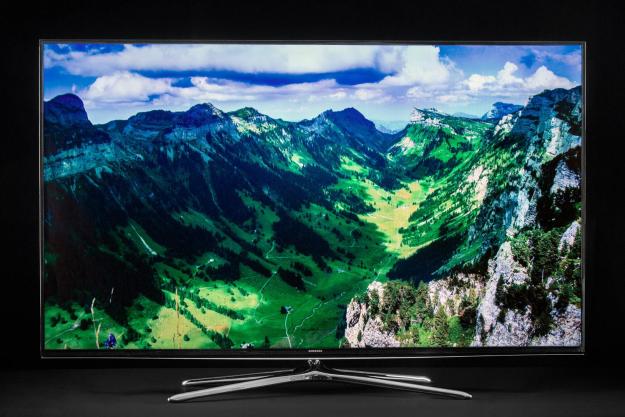 “A long list of features and a compelling price don’t quite make up for the H6350’s poor performance in dark scenes.”

It’s a strange time in TV land. The much anticipated era of 4K UHD TVs is finally here, and at prices that no longer require making those little compromises, like your child’s education. However, the day when viewers can sit down and watch live TV in 4K UHD is still a good ways out, and A-list content in the sparkling resolution from streaming sites like Netflix, Amazon, remains pretty scarce.

With 4K UHD content yet to hit the mainstream, it still makes sense to look into a 1080p TV — especially for those looking to snag a serious bargain from a sought-after brand like Samsung. Samsung has plenty of 1080p gems to choose from right now, but if excellent picture quality is your bag, the UNH6350 isn’t one of them. The 6350’s ample feature set and multiple inputs make it a very enticing choice, but a lack of finesse when the image gets dark make this 1080p bargain buy more bridesmaid than bride.

We must be getting spoiled, because pulling the 6350 from its dressing served up that same Samsung feeling we’ve gotten from many of its mid-tier TVs lately, right down to the spider leg stand. But the TV does manage to look classier than its price would suggest thanks to a little flash of chrome along the baseline to match the legs, and a disappearing bezel around the top and sides.

Accessories included with the TV are a wand-style backlit remote and batteries, an IR extender cable, a power cable, and a user manual. Despite this being a 3D-compatible TV, you won’t find a single pair of Samsung’s active-shutter 3D glasses in the box – those will cost you extra. You can pick up a pair of 3D glasses at Amazon for about $32.00.

As mentioned, the 6350’s stand design is a little tired, but at least it swivels – an important feature considering off-axis performance is pretty poor with most LCD TVs. Also, our 55-inch test sample fit nicely atop the Pioneer SP-SBO3 sound platform we’re currently evaluating as well — something that can’t be said for most edge-to-edge TV stands from Samsung’s upper tiers.

The TV is loaded with an impressive number of HDMI inputs, especially for the price. Packed into a recessed bay at the back are a trio of HDMI inputs (including one with HDMI ARC support), 3 USB inputs, and a Coaxial cable/antenna connection. Another HDMI input can be found on the back toward the right, along with a Component/Composite input, a 3.5mm analog audio input and output, a digital optical audio output (Toslink), and an Ethernet port.

The TV’s lanky remote may not look especially fancy, but we definitely appreciate the orange backlighting, something you don’t get with most TVs at this price point. Samsung’s standard design has been fine-tuned to near ergonomic perfection; the crosshair navigator and Smart Hub buttons are lined up perfectly for ease of use, as is the divot intended for your index finger on the back. In true Samsung fashion, the device also controls other devices in the Samsung family, like our BD0H6500 Blu-ray player.

Samsung’s smart TV platform is one of this set’s most compelling features, thanks to its intuitive interface that’s second (in our eyes) only to LG’s webOS system, which you won’t find in LG’s cheapseat models anyway. Calling up the Smart Hub lets you continue watching TV in a small window while you bounce around a five-paned carousel design that allows easy navigation to an apps page, video favorites, games, and other features.

Samsung’s smart TV platform is one of this set’s most compelling features.

New to the system is the addition of a band of icons at the bottom, which calls up the latest services, inputs, and content you’ve recently checked out. The convenient new feature allows for easy access to your most commonly used content and devices.

As for smart content, Samsung’s got all the best apps, including Netflix, Hulu Plus, Youtube, Amazon Instant, HBO Go, M-Go, and just about anything else you’d want to lay eyes on, all organized succinctly under the “Recommended” apps section. Less popular streaming apps, and social apps like Facebook and Twitter, are relegated to the “My Apps” page just below. More apps can be acquired from the company’s well-stocked app store.

Samsung makes setup easy with a brief wizard that requires the user to answer only a few simple questions. Once connected to the Internet (WiFi and Ethernet are both available) we were forced to update the TV software, but that took a matter of minutes. As per usual with Samsung’s ‘Movie’ picture preset, 6350’s picture was nearly optimized right out of the box, and since it’s a fairly basic model, there weren’t a lot of fancy processing features to fuss with, which usually end up getting turned off during our initial adjustment anyway.

We wound up making some slight adjustments to backlight, contrast, brightness, and color, then turned off ‘motion flow’, a feature designed to smooth out motion which invariably introduces the awful “soap opera” effect.

The good news about the 6350 is that it pairs its loaded-to-the-gills feature set with Samsung’s consistently solid color reproduction, along with clear 1080p resolution that will stand up alongside most TVs in its class. And there’s no doubt $800 for the 55-inch model we reviewed is a pretty screaming deal for a piece of Samsung TV real estate, especially for those who aren’t sticklers when it comes to some of the finer picture quality considerations.

The 6350’s shadow detail floats between mediocre and terrible.

The bad news is the 6350’s black levels and shadow detail floats between mediocre and terrible. Not only does the TV have a hard time providing anything near what most folks would consider black when the lights are out, but it also absolutely flattens any semblance of detail in darker scenes. Why is that a big deal when it comes to picture performance? Dimension.

Take the final installment of the Harry Potter movie series, for instance: the film is loaded with dungeon scenes, dark hallways, and creepy creatures casting spells in the moonlight. And while we don’t expect an LCD/LED TV to excel in these areas (especially at this price point), the 6350’s performance is below average. All depth and detail was smashed into flat silhouettes like a cardboard puppet show, eradicating the illusion of dimension almost completely.

Not a Potter fan? How about Christopher Nolan’s Batman series? The Dark Knight’s penchant for marauding in dark corridors made him virtually disappear in some scenes during our evaluation, exacerbated further by sitting even slightly off-axis from the screen. The flyover skylines of Gotham at night looked almost comical, as if the lighted windows were floating against a black canvas in midair.

In the 6350’s defense, the edge-lit panel does a pretty good job keeping the bleed from the LED lights along the sides at bay, seldom revealing the kind of blotched, milky patterns we often see from budget panels.

As expected from an especially thin panel, the 6350 is no prize when it comes to sound quality either. The TV offers little in the way of beef or potency in the low end, the midrange is bereft of any real touch or nuance in dialog, and the upper frequencies get pretty scratchy. Then again, if you want decent sound from your flat panel, you’ll likely need to add a sound system – that’s just the nature of the beast.

Samsung’s UN6350 hosts a jam-packed arsenal of features and apps that make it an alluring choice for the money. For those who watch a lot of sitcoms, or other well-lit programming, it might be worth the compromise in performance. But for those who put picture quality first, such a compromise will come back to haunt.

If you’re trying to save some cash (and who isn’t?) but still get top-notch image quality, we suggest checking out Vizio’s M or E-series TVs, the Panasonic TC AS530, or (if you can find one) one of the last of the great plasma TVs, Samsung’s PN8500, instead.

Be sure to check out our best TVs Under $1000 article for even more suggestions.