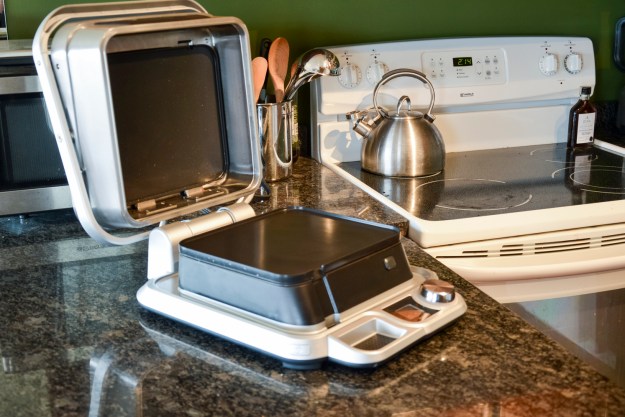 “This countertop cooker makes it practically impossible to ruin dinner.”

Filet mignon. Porterhouse. Rib-eye. Cinder really wants you to cook the perfect steak. Billing itself as a “waterless sous vide machine,” it’s a countertop grill that does what your stovetop can’t: gets to a precise temperature then holds it, holds it, holds it. You can leave your medium steak in it for up to a couple hours, and its center won’t turn any less pink, because the plates just aren’t hot enough. It’s the same principle as sous vide, but it looks more like an overgrown panini press.

After starting out on Y-Combinator, Cinder began accepting pre-orders in March 2015 and recently shipped out its first batch. The company set us one to test out, and all our Spider-Senses were tingling: would dinner be cinder-relished or belong in the ash bin?

I’m not going to make the obvious George Foreman comparison

We said the silver-and-black Cinder looks like an overgrown panini press, and that’s because it’s large. At 17-by-13-by-9 inches, it takes up almost half the surface of an ordinary range. It’s heavy enough that if you could find a cupboard large enough to fit it, you may never take it out again.

The knob lets you select the exact temperature you want, something your stovetop can’t do.

Like a panini press, the lid lifts to reveal the cooking surface — or the two cooking surfaces. Two nonstick plates embedded with temperature sensors create a 9-by-10-inch controlled-temperature sandwich, heating your steak, fish, chicken, or veggies from above and below. The Cinder has power button on the lower front outer case, as well as an LCD screen and knob with an LED indicator light around it. You lift the top up by a black handle, and there are separate buttons for releasing the upper and lower cook plates for easier cleaning. A drip tray pulls all the way out, and it’s one of the only dishwasher-safe parts of the appliance.

There’s also a little basin all the way around the cooking surface. We found that grease and crumbs tend to congregate here, and it was best to wipe the trough up thoroughly after each use.

The knob lets you select the exact temperature you want; the LCD screen frenetically alternates between the current temperature and your target as you turn the knob. When you’re heating up to 350 degrees Fahrenheit (176.67 degrees Celsius), it takes about five minutes. The motor whirs as it turns on and off but isn’t overly loud. The first few minutes the degrees increase roughly every second, but it slows as it gets closer to its target temperature.

The first time you use the Cinder, it will ask to calibrate the machine’s “thickness sensor.” This failed a couple of times for us – it turns out we were twisting the knob prematurely. You’re supposed to close the lid first and then follow the instructions.

Dialing up the heat

The Cinder can heat up as high as 450 degrees Fahrenheit (232.22 degrees Celsius), a temperature meant for searing your steak or chicken once you’ve slowly cooked it at a much lower temperature. Even if you’re used to sous vide cooking, the time and temperature you should use to cook a rib-eye medium-rare likely won’t be obvious. That’s where the Cinder’s app becomes pretty imperative — so, it’s kind of a problem that it’s only on iOS right now.

You don’t need the app to set the Cinder itself — that can be done with the knob — but the booklet that comes with the cooker doesn’t have nearly the amount of information the app does. Right now, it recommends temperatures for 22 foods, often with further subsets for how you like that item cooked. Salmon, for example, has five temperature suggestions, based on whether you want it butter-soft, lightly flaked, flaky, very flaky, or well done.

The Cinder does its job marvelously — though we’d recommend not closing the lid when making sandwiches.

If you’re using an iOS device, you definitely have an advantage. The Cinder pairs with your phone, and once you choose what you’re cooking in the app, you put turn the grill on, put your food on the plate, close the lid, and walk away. The plates quickly heat up to temperature, slowing as they get close to the target. Once they reach the desired temperature, your food should be ready, but you can leave it for up to two hours, according to the instructions, and it won’t burn or overcook. (That’s helpful, since there’s no buzzer to alert you when your food is done.)

Do you need to put the food in before the Cinder heats up? Eric Norman, Cinder’s CEO, told us that “for now, putting food on first is better because we can estimate cooking time based on thickness in the app. In the future, we will make the app more flexible.” Still, for high-temperature cooking, like making grilled cheese, he recommends letting the machine get up to temperature.

Unfortunately, we found the range of time that showed up in the app was often quite wrong. At one point while making filet mignon, for example, the Cinder app said it would take another 175 to 228 minutes to cook. It sent a notification eight minutes later to the phone that dinner was ready. This issue seemed to improve over time; the app later approximated that chicken breasts would take 19 to 25 minutes, and they were done in 28.

The app seems to be the only way to get a notification that the appliance is up to temperature — the Cinder doesn’t beep or anything. You’re similarly in the dark if you’re using the app to control the cooker; the LCD simply says “Remote control,” so you have to have your phone on to watch the temperature climb.

When both chicken and steak were finished, they looked very lackluster, as if they’d been boiled — that’s the nature of slow-and-low cooking. You get similar-looking results with sous vide, and the Cinder has a built-in mechanism to correct for it. You take the food off the plates, crank the knob all the way to the right, and let it heat up to “sear,” the device’s max 450-degree temperature. Then you put the food back on, close the lid, and push down on the knob. You’ll hear sizzling and the LCD will show a countdown timer. Afterwards, your food should look more like you’ve fried or baked it.

Another thing you’ll notice: Open the Cinder after cooking chicken or steak and you’ll see a big puddle of juice. In this way, the cooker differs from sous vide, because with that method, meat sits in its own juices as it heats in a water bath. That means the results are not exactly the same.

*That’s what my husband said when I said, “Cinder app.”

During our time with the Cinder, we made steak, chicken, fried eggs, asparagus, sandwiches, and salmon burgers. Not a thing burnt, and while the bottom of the eggs and bread were a bit brown, they came out very well. The Cinder does its job marvelously — though we’d recommend not closing the lid when making sandwiches, unless you like them as squashed as if they’ve been stuck at the bottom of a backpack all day.

The Cinder isn’t a complete substitute for your stovetop, however. With low edges on the cook surface, you won’t be able to put a ton of food on there or anything you were planning on making into a sauce.

A new device like this needs a slew of step-by-step recipes, and Cinder’s app isn’t up to the challenge.

The app was instrumental in helping us figure out how hot the Cinder should be for each of these items, but it was still a little light on directions. The app gives different smoke points for oils, along with cooking guidelines for things like eggs, even though there isn’t an automated recipe for them in the app yet. And these recipes don’t offer much guidance, other than temperature and a set time.

Take for example the sample recipe in the booklet for grilled cheese – and this was far more step-by-step than anything in the app. (There are only three recipes in the booklet, though there are a few cooking tips sprinkled throughout.)

The ingredients include an ounce of unsalted butter, and the directions are as follows:

There are a few problems here. One, there isn’t currently a “sandwich” option in the app. Two, am I supposed to use the butter on the plates? It’s never made explicit in the directions, though I inferred the answer is yes. I left the sandwich cooking for the recommended five minutes, and the bread came out a little browner in some areas than I’d like, but that was an easy adjustment to make for the next time.

A device like this that’s marketed toward novice cooks should be much more explicit with its instructions and recipes. You’ll find some information about using oil, for example, but only in the sear section. Does that mean you shouldn’t use oil for slower, lower temperature cooking? Digital Trends got in touch again with Cinder’s CEO, who said none is required for low-temp cooking; some high-temperature oil is recommended for searing, but butter smokes at temperatures above 375 degrees Fahrenheit and isn’t recommended.

Even if someone is an experienced cook, a new device like this needs a slew of step-by-step recipes. The good news is that’s easier to fix than a faulty device, and the Cinder works despite the dearth of instructions.

The Cinder has a one-year warranty and a 100-day return policy.

The Cinder will take a hunk of counter space and a chunk out of your wallet, but it does its job well. It may take a bit to master, but probably less time than learning cooking from scratch.

The Cinder is fairly unique. There are lots of other cooktop grills, such as this 3-in-1 Griddler from Cuisinart, but the precise temperature control and accompanying app make it stand out – as does its $400 price tag.

With its removable plates and drip tray, it should be fairly easy to keep the Cinder well maintained. That may not be the case for the company itself: Cinder is a startup, and if it suddenly shudders, you could be left with a smart cooking device and app that no longer gets updates.

Yes. The next batch of Cinders is estimated to ship in December 2017, though preorders are available now. If you have ample counter space and are constantly burning your chicken, the Cinder could really transform your cooking life. But for $400, keep in mind what we said about the company being a startup.