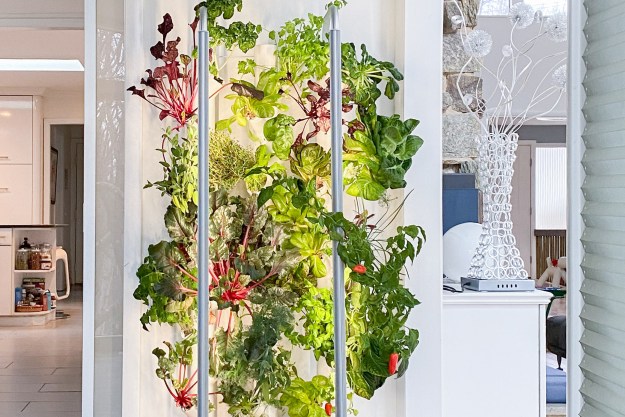 “The Gardyn takes everything I like about smart gardens and scales it up to include way more plants, but the app control is a bit finicky.”

Do you like to cook? Even if you don’t fancy yourself much of a chef (and yes, I know that term is reserved for professionals — just go with it), there’s something about being able to spice up a premade jar of marinara sauce or hit just that perfect spice combination to take a dinner from run-of-the-mill to extraordinary. Who says you can’t eat great on a Thursday night?

Fresh ingredients are the key to great dinners. As I’ve said before, I’m a fan of smart gardens. If you live somewhere without a lot of space or you just don’t think you can keep plants alive, smart gardens take the guesswork out of it for you. When Gardyn reached out and offered me the chance to test out their Gardyn 2.0, I jumped at the chance. This thing is massive — it can hold 30 plants and basically does all the work for me. All I have to do is sit back and reap the rewards.

Buckle up for the setup

The Gardyn took me over an hour to assemble. There’s a lot of different parts that all need to fit together, and several that don’t fit quite as nicely as they should. I had to take care with the LED grow lights, since they felt fragile and needed to be supported while I attached them. I suggest at least two people put this together; trying to do it by myself was a bit of a bear.

It also takes a bit of time to position your plants. The Gardyn holds 30 different pods, which is a ridiculous amount. While there’s no real requirement to placing them, I would take time to group the plants up according to type. Also think about the ultimate size of the plant once it has finished growing, as well as how much sunlight it needs.

I found the top row of the Gardyn grows markedly slower than the rest, largely because it just doesn’t get the same amount of LED exposure. If you’re growing anything that doesn’t need as much light, put it on top.

It’s rare that I loathe an app as much as I do this one. While the Gardyn itself is a fantastic device, the app is held together with duct tape and prayer, and not enough of either. For the most part, it works, but there are several small issues that can be infuriating.

Take scheduling the lights, for example. By default, there are three separate time periods when the lights turn on and off. I prefer to let it run during the night when I’m out of the room, rather than during the day when it casts a glare on any nearby screen. It’s easy enough to set up — at least at first glance — you just select the time period.

But be careful not to overlap any of them, because if you do, the app will crash on you. No warning message or error, just a full-blown shutdown to the home screen of your phone. The easiest way around this is to just completely clear all three of the preset schedules (by selecting them and tapping the trash icon at the bottom) and then re-adding your own times.

The water schedule doesn’t work the same way, and doesn’t seem to have the same issue. I recently increased the water rate to six times per day from the default three (every four hours, five minutes at a time).

One thing that’s worth noting is that the app has its own built-in smart assistant named Kelby, which will alert you when it’s time to refresh the water in the tank, add plant food, and much more. However, most of Kelby’s features are locked behind the staggeringly-expensive monthly subscription.

There are quite a few things included in the membership that help offset the cost. Users receive 10 yCybes each month with free shipping, and save up to 60% off any future yCube purchases. That’s nothing to sneeze at; a single yCube is around $5, so that’s essentially $50 per month in value just from the cubes alone.

Although the membership is expensive, it more than pays for itself on a monthly basis.

There’s a live view feature in the app, too. You can check in on your plants through the two built-in cameras, but their resolution is too low to make out many details. There’s also a time lapse feature that’s currently in beta, but again, it’s locked behind a paywall.

The downside to accumulating all those yCubes is that your plants should last for longer than a month at a time. You’ll build up a backlog of cubes. The main value of the membership lies in Kelby; the AI is impressive, especially in terms of plant care. The assistant can even identify specific plants based on a series of color-coded dots on each cube and provide feedback on your Gardyn.

Still, though it’s not an inexpensive membership, it includes enough perks to more than pay for itself, especially if you’re a die-hard user.

One way Gardyn sets itself apart from the competition is in the sheer number of plants it offers. I’ve seen optional yCubes containing plant varieties I’ve never heard of before. A few of the options include:

The biggest appeal is that the Gardyn can grow plants that are much larger than what other smart gardens offer. You can grow tomatoes, peppers, and more — all of which typically require a substantial amount of dirt, However, the Gardyn manages to produce a substantial yield despite its hydroponic nature.

The growth is slow. I’ve had my Gardyn set up for a bit over six weeks now, and none of the plants are ready for harvest. They’re still steadily growing, but not at the rate I expected. When I grow something in my AeroGarden, it feels a bit like magic in terms of how quickly the plants spring up.

Those same varieties grow at much slower speeds in the Gardyn, but I hope that means they will last for much longer. I’m starting to get a bit impatient, though; the vibrant colors of some of the plants make me want to try them out, but there’s just not enough for a decent harvest.

The Gardyn has become a conversation point in my home. When guests come over, they’re always surprised by the veritable wall of plants that greets them in the entry hall. There’s little that I have to do once it’s set up; it’s mostly automatic. That’s a huge benefit, especially as we head into one of the busier times of year.

Thanks to its massive water tank, refills are infrequent, though you still need to add plant food.

The reservoir is massive. It can hold multiple gallons of water at a time, which means the number of refills required is minimal. Just be prepared to set aside about five to ten minutes to refill the tank. If you have a hose that can reach it, great. In my case, I’m filling up a pitcher of water and pouring it into the reservoir when it’s time for a refill. It’s time-consuming, but easy to do.

The only manual work required is adding in plant food. That’s done on a semiregular basis, but takes less than five minutes to do.

One of the most notable things about Gardyn is its community. There are a lot of enthusiastic fans of the system who have found workarounds to almost every major issue with the platform. For example, there are dozens of 3D-printer recipes for yCube configurations, as well as instructions on how to install rockwool and use your own seeds to grow anything you can imagine.

If you want to grow a plant that Gardyn doesn’t offer, that’s the way to do it. If you aren’t getting the results you expect,  just check with the community. Almost every type of plant has been tested and its growth pattern and settings optimized.

Is the Gardyn the future of gardening?

The Gardyn is by far the most advanced smart garden I’ve ever gotten my hands on. It’s an impressive bit of smart tech, but it leaves a lot of room for improvement. I was sent the Gardyn 2.0, but the Gardyn 3.0 was released shortly after I set mine up, and it seems to have improved on several features.

The Gardyn is almost everything I want, but the good news is that the major problems are mostly software-based.

I have high hopes for the platform. Though my plants aren’t growing at the rate I expected, it’s a long-term project that I look forward to tweaking and experimenting until I get the desired results. And when I do? That’s going to be one delicious salad.