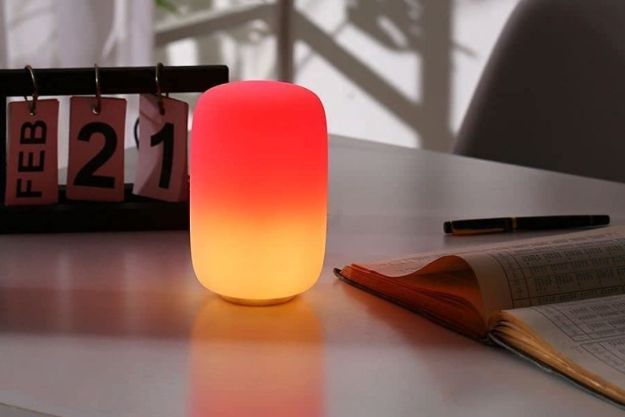 “The Moonside Lamp One offers gorgeous light shows but is a bit rough around the edges.”

There’s no better way to change the ambiance of a room than by altering its lighting. Whether you want something dim and romantic or bright and energized, smart lights can do it all — and they’ve quickly become a popular way to upgrade your smart home. The Moonside Lamp One is one of the newest editions to the marketplace, giving you access to millions of different colors with a diminutive footprint that makes it perfect for nightstands, desks, or the background of your latest Twitch stream.

The Moonside Lamp One is a powerful device, but it stumbles in some key areas that might make it less than appealing for some smart homes. But if you’re willing to look past its shortcomings, you’ll be treated to a light show that’s unlike anything else on the market.

Like all smart lights, the Moonside Lamp One is easy to set up. Just plug in the USB cord, download the app on your phone, sync it via Bluetooth, and you’re ready to rock. You’ll also have the option to connect your Lamp One with Google Assistant, Amazon Alexa, or IFTTT — although you’ll need to create a Moonside account to access the requisite Wi-Fi connection that’s needed for this functionality.

As for the Lamp One itself, its construction is underwhelming. The shade is built from frosted plastic, which makes it a bit more durable than glass, but feels cheap when handling it. It’s also incredibly lightweight — I’ve found myself accidentally knocking it over during testing more times than I’d like to admit.

The device can be turned on and off remotely, and there’s also a nifty power button hidden away at the bottom of the device. I’m a fan of this positioning, as it’s tucked out of the way and gives the Lamp One a sleek appearance that’s almost entirely dedicated to the array of lights hidden within its circular walls.

The lights are truly the star of the show with the Lamp One. The LEDs inside provide a range of 16 million colors, have a 10-year life span, and can produce 120 dynamic color zones. It’s these dynamic zones that make the Lamp One come to life, as it can reproduce a variety of effects. From dancing flames and bouncing orbs to strobing lights and blending colors, there’s almost no limit to what the tiny lamp can do. I spent my first 20 minutes with the Lamp One simply scrolling through all the options, before settling on the Rising Rainbow as my theme of choice.

The smartphone app allows you to set a single color for the Lamp One, change its brightness, or choose a theme (like Dancing Beat, which sends colors racing up and down, or Candy Mix, which slowly merges colors across the shade). You can also design your own color scheme, or have the device react to nearby sound. The reactive sound function doesn’t work quite as well as expected, as it would only trigger if I bumped the table it was on or picked up the device.

All the other features, however, more than make up for this shortcoming. The list of themes is absolutely staggering, with dozens of unique options up for grabs. Moonside says that more themes are constantly being added — which should hopefully give the smart lamp some longevity in your home.

While the Lamp One has some impressive lights, it falls short in other areas that are just as important for a smart lamp. For one, it does not yet have HomeKit support. Its smartphone app also had quite a bit of lag when running on Wi-Fi, and oftentimes it wouldn’t respond at all until switching over to Bluetooth.

There’s also only a bare-bones tutorial to get you up to speed with how everything works. As a result, you’ll be left fumbling around with all the menus and buttons as you discover what they do on your own. An online manual is offered — but it’s not in-depth enough to cover everything you need to know. Coupled with the unresponsiveness of the Wi-Fi mode, it can be cumbersome to learn the Lamp One’s intricacies.

If you’re looking for a smart lamp that offers incredible versatility and puts on impressive light shows, the Lamp One deserves a closer look. Keep in mind that it won’t play well with HomeKit and it can be frustrating to control through the dedicated smartphone app, but for most shoppers, that shouldn’t be a deal breaker. Its price tag might be a bit steep (consider checking out our list of the best smart lamps for comparisons), but if you can find it on sale, the Lamp One makes a solid addition to any smart home.