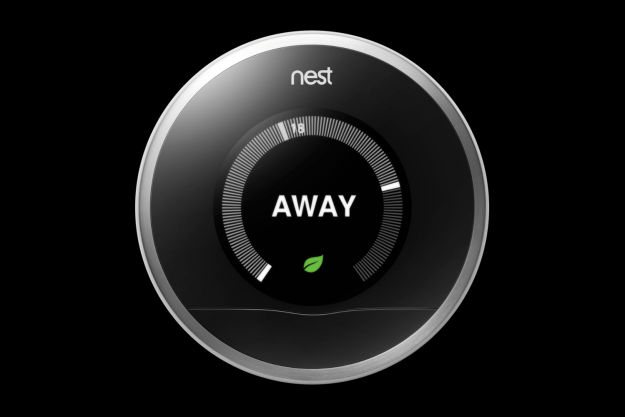 “Nest should appeal to anyone who wants to save energy and money.”

At least that’s how much Google was willing to pay for Nest, the company behind the smart Nest Thermostat. Created by former Apple employees who were also the brain trust behind the iPod and iPhone, Nest’s second generation thermostat, which can be remotely controlled using an app, is nearly as sexy as a smart phone. But the real beauty of this model is how easy it is to install and use, which very nearly justifies its $249 price tag.

The second-generation, Wi-Fi-enabled Nest improves upon the earlier model by shedding about 20 percent of its thickness and adding support for more types of heating systems, including heat pumps and radiant floor systems. (The company regularly upgrades the Nest software, automatically downloading it to owners’ devices.) The biggest improvement is that the thermostat now recognizes how long it takes to heat or cool a house depending on the type of HVAC system installed. So if you set it to raise the heat to 70 degrees at 7 am, Nest may turn your heating system on at 6 am so that it’s the right temperature when your feet hit the floor in the morning. Conversely, it won’t waste energy micro-managing the temperature on systems that take longer to regulate comfort levels.

Rarely can one say of a consumer electronics product, especially one as pedestrian and notoriously convoluted as a programmable thermostat, that its installation procedure is a thing of beauty. But that is exactly what Nest has accomplished, from its circular design, which perfectly fits over holes left by old-fashioned, mercury-filled rotary thermostats, to its easy-to-follow instructions.

There is also no need to worry about stringing a power line through the wall or replacing batteries to power the thermostat.

Boxed up as if it were a precious piece of jewelry, the Nest comes complete with a back plate to cover larger holes (like those for clunky old programmable thermostats), labels to mark the correct wires, and even a small screw driver.

I was able to pop off an old thermostat, label and disconnect the wires, reconnect the wires to the clearly marked round back plate of the Nest, snap on the stainless steel facade with its 320 by 320 pixel color display, and enter my Wi-Fi password in roughly 20-minutes. Furthermore, I happened to install Nest in a remote part of my house where most devices I’ve tested cannot connect to my Wi-Fi network. Testifying to its sensitivity, Nest managed the connection without a hiccup.

There is also no need to worry about stringing a power line through the wall or replacing batteries to power the thermostat. Nest’s built-in lithium ion battery is sustained by a trickle charge it can draw from existing wire connections.

Part of the intelligence of the Nest design is that it while it may be beautiful, it never flaunts its pulchritude. The bright color screen remains dark until you push its outer ring or wave a hand near its built-in motion sensor. Want to change the temperature? Just rotate the outer ring.

But it’s not just a pretty face. It has smarts, too. The system gradually learns your preferred settings at particular times of the day–and even on particular days. After a week or so, it starts to make those changes on its own (JQ stays up late and wants the heat at 70 until 1 am; then keep it turned down to 62 until 10 am.) The motion sensor is also put to intelligent use: if no one walks by the thermostat after a couple of hours, the device will switch into waymode and turn down the heat or AC according to presets. After a few days, it learns when you come and go and will turn down the heat or AC even more quickly–and then kick it back on before you get home from work.

Should you want to play with Nest, the company provides a graphic enumerating your energy savings over the previous 10 days, based on the time of year, location, and size of your home. If you want more life quantifying information, you can sign up for monthly e-mail reports that also tout the total kilowatt hours of energy saved by all the Nest thermostats currently in use.

In addition to the convenience factor, Nest should appeal to anyone who wants to save energy and money. According to the U.S. Department of Energy, a typical homeowner saves about 10 percent with a standard programmable thermostat. Nest estimates it can do better by shaving 20 to 30 percent off some energy bills. If you’re in the Northeast and use heating oil, that could save you several hundred dollars over the course of a single winter, easily recouping the cost of the thermostat.

The Nest Thermostat is also ideal for those who own a second home. Tap into the Nest app and you can raise or lower the temperature and even see what the current outside temperature is so that you can kick on the heating system should sub-zero temperatures raise the threat of frozen pipes.

Compared to other similar products I’ve tested, Nest rarely drops off line and always obeys my commands, whether I’m next door or 200 miles away. And there are Nest apps for Android, iOS, and even Kindle Fire devices.

The one disappointment is that the company has not extended its design initiative to other quotidian home devices, such as door locks and security systems. Nest has hinted at other product plans and the possibility of partnering with home automation systems from other companies, but as yet it has only introduced one other device, the Nest Protect smoke and carbon monoxide detector. Unfortunately, a problem with the Protect’s gesture recognition feature has temporarily sidelined that product. (We’ll review it when the company resumes sales of the Protect.)

In the meantime, we’re sufficiently impressed by the Nest that we look forward to more innovations from the company to justify Google’s $3.2 billion vote of confidence.