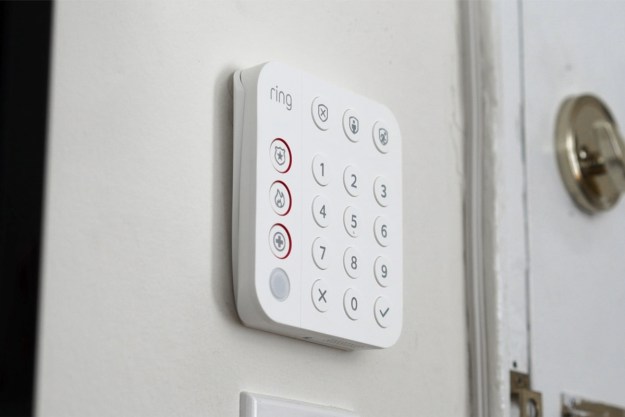 The new Ring Alarm (second generation) starts at $200 for the five-piece kit, but there are several other kits and bundles available to choose from — plus, you can always add accessories later on as they’re needed.

Ring’s intent is to make home security simple, easy, and secure. Unlike traditional security systems that require professional installation, it’s a do-it-yourself solution where you get everything set up. But Ring Alarm still offers 24/7 home monitoring to give homeowners another pair of eyes when they’re away.

Fundamentally, there’s no major change to the basic premise of the new Ring Alarm. It’s the same DIY home security system that consists of a base station, contact sensors, motion detector, keypad, and a range extender. You attach the contact sensors to doors, windows, or other points of entry throughout the home, which then communicate to the base station and send alerts whenever they’re triggered.

What’s different about the new hardware is that Ring has shrunk the size of each component by about 30%. The keypad, for example, is 38% smaller when compared to its previous counterpart in the first-generation system.

Even with the reduction, however, the sensors aren’t dramatically smaller than those employed in other systems — like SimpliSafe or Xfinity’s Home Security. Ring is playing catchup instead of leading with a significantly smaller design.

Another major change is the batteries used by the sensors. The first-gen version requires a 3v lithium battery, which isn’t as readily available as the CR2032 coin cell batteries used by the new version. It’s a boring detail, but you’ll appreciate the change when it comes time to swap a battery.

If you happen to own the first-generation Ring Alarm, you can mix and match the hardware to work with the new system, and vice versa. I’m glad to see owners won’t need to ditch the old hardware if they plan on upgrading. It’s always a welcome relief when there’s interoperability because it helps maintain the value of the system over time.

Setup is a breeze with the on-screen instructions in the Ring app. The base station can be wired directly to a router or wirelessly via Wi-Fi, but its placement in the home is crucial because it’s the gateway that talks to the various sensors — plus, there’s the range limitation of the sensors. For smaller places like my apartment, range is not an issue because everything is within 50 feet of the base station. Thankfully, the base model of the Ring Alarm, the five-piece kit, comes with a range extender that tacks on an additional 250 feet.

After reclassifying the sensors, the whole setup process was complete in under 30 minutes. If you require additional sensors, Ring has an array of accessories to choose from — like flood sensors, a smoke and carbon monoxide sensor, and more.

Plenty of control, but it could be smarter

Ring’s mobile app is where you can access and modify all the settings of the Ring Alarm home security system. On the app’s dashboard, you can quickly arm and disarm the system by pressing corresponding buttons. In a critical situation, I like how the exclamation button on the dashboard quickly allows me to request assistance and sounds the alarm. Those same controls are also found on the keypad for quick access.

Diving down to some of the app’s granular controls, I find it useful that I can set the mode for each sensor. For example, I have the window sensors turned off when it’s in home mode, which prevents it from bombarding me notifications whenever I open or close them. At the same time, I have motion detection turned off with my Ring Indoor Cam — preventing even more redundant notifications from being sent to me.

Conversely, when the system is armed in away mode, all the sensors are monitored and are set to sound the alarm when they’re triggered. Speaking of that, the base station emits a deafening 104 dB siren, which is more than loud to scare off an intruder — and for my neighbors to hear.

Although there are enough controls to tailor the security system to my liking, it could be smarter. One complaint I have is that the alarm won’t trigger whenever my Ring Indoor Cam detects motion in away mode — it just sends the typical push notification instead.

Also, there doesn’t appear to be an option to force the camera to turn on and record footage whenever any of the sensors are triggered — something that would be useful whenever my front door opens, regardless of where the camera is placed in the home.

And finally, it would be helpful if Ring Alarm could detect on its own whether I’m home or not. In fact, there were several occasions when I forgot to arm it before leaving, so it would be nice for the app to suggest arming it to away mode.

The single most attractive aspect of the Ring Alarm (second gen) is the affordable cost associated with its 24/7 professional home monitoring service. You’ll need to subscribe to Ring Protect Plus, which is $10 per month or $100 per year, but offers the advantage of real-time emergency response.

Whenever an alarm is triggered, not only will you get a notification on your smartphone, but a representative from Ring’s professional monitoring service will call to verify. From there, you can simply verbally provide the password to ignore the alarm or have emergency services sent to your home.

The $10 per month cost of Ring Protect Plus also covers video history up to 60 days for all the cameras connected to your Ring account. In the event that power goes out at home, the base station features a 24-hour backup battery and cellular service to continue providing service. If you’re heavily invested in the Ring ecosystem, the cost is a steal considering it also includes professional monitoring.

In order to gee the most out of the Ring Alarm (2nd Gen), you’ll need to invest in some additional accessories that will enhance and expand the system. While door, window, and motion sensors are typical with most kits, Ring has continued to build out its home security system with a slew of new accessories.

Ring’s new Mailbox Sensor works much like its motion sensor, but it’s been specifically crafted to monitor the motion of your mailbox opening — so you’ll know firsthand whenever the mail arrives. Setup and installation is pretty simple, although it does require a Ring Bridge. The sensor can be purchased with the Ring Bridge included for $50, which is useful because the bridge will interact with some of Ring’s other lower-power devices. If you already have one, the Ring Mailbox Sensor can be purchased separately for $30. It works like a charm and will notify you in the Ring app whenever it’s opened. Plus, it can be linked to other Ring devices for even more peace of mind. For example, you can have a Ring outdoor security camera automatically record video whenever the Mailbox Sensor is triggered.

The Ring Alarm (second gen) has you covered when it comes to protecting your home — without costing you an arm and a leg for a professional monitoring service. The base five-piece kit is priced at $200, and the monitoring service is $10 per month (or $100 per year). This makes it extremely competitive with other services, which have both a higher initial investment and a higher monthly fee.

SimpliSafe is another DIY home security service to consider because of its robust lineup of accessories. In addition to the usual sensors, SimpliSafe also offers a smart lock, dedicated smoke and CO2 detectors, a key fob, and a glass-break sensor. SimpliSafe’s accessories are cheaper ($15 for an entry sensor, versus $20 for Ring). And to top it off, there are more settings and privacy controls to adjust with SimpliSafe.

Since the base station remains stationary and inside your home, it’s unlikely to be damaged or need to be replaced. The sensors, however, will need their batteries replaced, and the alarm keypad needs to be recharged on occasion unless you opt to have it plugged into its power source.

Ring provides an extended warranty on all devices attached to your Ring Protect Plus subscription, so it’ll cover malfunctions due to defective parts or workmanship until you discontinue service.

Yes, especially if you’re already invested in the Ring ecosystem and want an affordable professional home-monitoring service. If you already own the first-gen model, there’s little incentive to upgrade, because the basic functionality and service are unchanged.