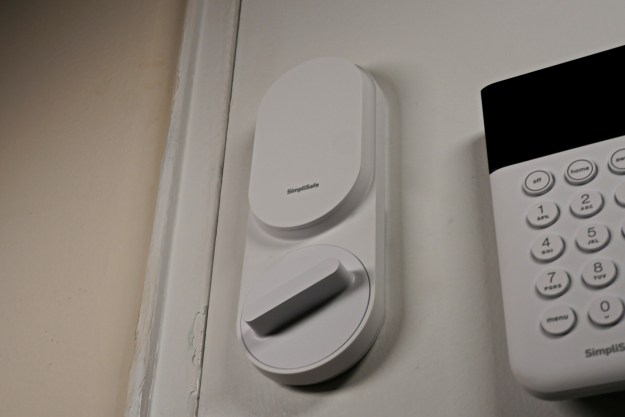 “The SimpliSafe Smart Lock is good looking and smart at the same time.”

SimpliSafe was founded on the premise of home security made simple, a solution that doesn’t require professional installation, nor is it attached with convoluted prices. Instead, it’s a DIY option that offers the same peace of mind as a traditional system — only you set it up yourself.

While SimpliSafe’s portfolio of connected home gadgets has continually grown — the company now produces carbon monoxide detectors and a video doorbell camera, among other things — it’s just now that we’re getting a smart lock that’s compatible with the system. At first glance, the apt-titled SimpliSafe Smart Lock looks like a product sold at Ikea. As with most things, however, there’s more to it than meets the eye.

I installed my last smart lock in 2014, a somewhat arduous task given it involved removing my deadbolt, replacing it with the in-box one, and installing the new lock and striking plate. In fact, the whole process took close to an hour.

SimpliSafe’s approach differs because you retain your existing lock and bolt — you only need to install the interior thumbturn mechanism. The entire installation process took no longer than 15 minutes, so it really does live up to SimpliSafe’s fundamental principle of being easy to install.

The whole installation process took no longer than 15 minutes.

Included with the packaging is the PIN pad that can be fastened to the exterior of your door, which allows you to punch in the correct code to unlock your door. While this doesn’t add much to the installation process, I chose not to attach it because I didn’t want something distracting on the outside to indicate I was using a smart lock. The last part requires you to connect it to your existing SimpliSafe security system, something that can be easily done through your existing security keypad or mobile app.

Honestly, the SimpliSafe Smart Lock reminded me of something that was designed by the Swedish engineers over at Ikea, if only because of its modern-looking aesthetics. It’s clean and sleek in comparison to other smart locks, which tend to be an eyesore due to their overwhelming size. SimipiSafe’s offering isn’t nearly as distracting to the eye.

The white, soft-touch matte finish of the smart lock is a welcome alternative to the cheap plastic or faux metal housings you often find on other smart locks. Accessing the batteries doesn’t require you to take apart the lock or remove screws, either — you simply slide off the cover to gain access. The lock also sports a satisfying lock-unlock mechanism that confidently buzzes whenever it’s triggered. It locked and unlocked perfectly throughout weeks of testing, and when combined with a SimpliSafe Entry Sensor, it averted unwanted door damage by preventing the deadbolt from extending unless the door was shut.

Stick with the basics

Sure, the SimpliSafe Smart Lock features an attractive design that’s easy to install, but it’s rather light when it comes to smart features. Locking and unlocking the device is largely done in one of three ways: Using the PIN pad, using the SimpliSafe app, or using your physical key. Those options may satisfy SimpliSafe users that appreciate the company’s simple approach to security, but I was hoping to get a few more features, like proximity unlocking or time-sensitive passwords to share.

I understand that SimpliSafe wants to stick to the basics, but I really would prefer to use my phone as my key and leverage proximity unlocking. It’s a pain having to take out your phone and use an app to do unlock your front door, which can be a hassle when you’re juggling grocery bags. SimpliSafe does sell a key fob for its system that can do this, but it requires an additional $25 purchase.

Despite this, there’s a handy auto-lock feature that allows you to automatically lock your door in the event you should forget. I forgot to do so in a couple of instances, so having this feature provided some peace of mind. Although there’s no voice command functionality or compatibility with Alexa, Siri, or Google Assistant for unlocking the lock (for obvious security concerns), the lock will automatically lock if you say, “Hey Google, arm my house.” You can also add custom pins using the mobile app, designating them for family members, landlords, and guests, but they’re not time-sensitive.

Tied down to a closed system

Before you even tinker the idea of buying the SimpliSafe Smart Lock, you’ll need to sign up for its home security system. There are basic packages that start as low as $161, but you’ll also need to subscribe to the company’s “Interactive” plan, which costs 83 cents a day or $25 a month. This provides 24/7 live alarm monitoring, smart home integrations, and remote locking/unlocking with the mobile app.

So, what does this mean? To put it simply, you’ll need to pay more than just the initial cost to buy the smart lock, given it’s effectively tied to a closed system. You can’t just buy the lock and start using it without subscribing to the SimpliSafe’s ecosystem. For those who are already a part of the SimpliSafe family, though, it’s not much of a problem.

SimpliSafe offers a generous, three-year warranty for all equipment purchases from the original purchase date.

The SimpliSafe Smart Lock sports, without question, one of the slickest designs I’ve ever encountered in a smart lock to date. Plus, the device’s $100 price tag undercuts many of its rivals.

SimpliSafe has tested its locks and found that they last for more than 100,00 turns. The four AA batteries that come with the lock are rated to last an upwards of a year, but once depleted, rest assured you can still manually lock and unlock it the old fashion way.

For those who want a more comprehensive offering, the Lockly Secure Pro offers an impressive suite of features — including a fingerprint sensor, dynamic keyboard, and Alexa compatibility — which renders it the perfect companion for both the household and AirBnB hosts. It’s significantly more expensive, however, given the deadbolt and latch versions retail for $300 and $330, respectively.

If you’re a current SimpliSafe customer, it’s a wonderful addition that won’t cost you an arm or a leg. For everyone else, they just need to be mindful of the startup cost associated with the Smart Lock and its rudimentary feature set.