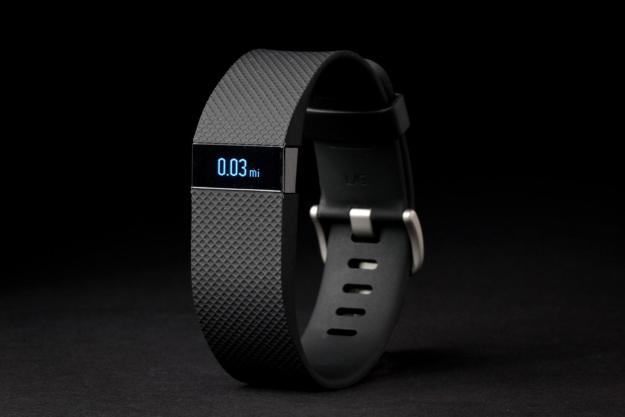 “It’s not as precise as other heart-rate monitors, but Fitbit’s Charge HR will still motivate you to move more and charge into workouts harder.”

Back in February 2014, Fitbit voluntarily recalled its Force line of fitness bands after users reported that the device was causing rashes. Now, with the Charge, Charge HR, and Surge, Fitbit has put the recall behind it and returned with a fresh array of fitness bands that put a little heart and a lot of smart style into health tracking.

The Charge HR fitness tracker fits right in the middle of the company’s triad of new bands. It has the slim, sleek, minimal shape, and function of the Charge, yet also features an optical heart-rate sensor that can track heart rate 24/7 like its bigger, more expensive brother the Surge.

We know it’s not going to cause a rash, but does this middle model make sense for most buyers, or is it compromised on both price and features compared to its siblings?

In addition to the heart-rate sensor, the brains of the Charge HR include a 3-axis accelerometer, an altimeter, and a vibration motor for silent alarms. All this technology comes neatly enclosed in a one-piece, .83 inch wide elastomer band that comes in four colors: black, plum, blue and tangerine. Whereas previous Fitbit bands (and the new Charge) had post-and-hole closures that many users found difficult to close, the Charge HR features a traditional watch band buckle made of surgical stainless steel, with a locking free loop to secure the end of the strap to the band. The watch buckle makes adjusting the band intuitive, but to make the fit even more personalized the Charge HR comes in three sizes: small, large, and extra large.

When it comes to health and fitness metrics, the Charge HR packs it in. It displays the time, counts steps, tracks mileage, calculates calories burned, records exercise time and intensity and, thanks to the altimeter, keeps track of the number of “floors” climbed. It can also monitor sleep quality automatically. All of these metrics are clearly viewable on the Charge HR’s blue OLED display.

Fitbit calls the Charge HR’s heart-rate feature “PurePulse.” This optical heart-rate sensor, located on the back of the band, logs your pulse 24/7. It allows for both a more accurate calorie-burn count, and detailed feedback on exercise intensity. The Charge HR’s silent vibration alarm can be programmed with up to eight different repeating alarms via Fitbit’s free smartphone app (available for iOS and Android). And when paired with a compatible smartphone, the Charge HR can pass on call notifications with a quick vibration and a text scroll of the caller’s name or caller ID. It does not, however, do text notifications.

The Fitbit smartphone app and partner Web interface make viewing daily movement trends very straight forward. The dashboard features brightly colored, graphically pleasing representations of steps taken, resting heart rate and current heart rate, miles travelled, minutes active, floors climbed, calories burned, and hours of sleep. Current weight, food consumption, and water intake can be logged manually as well. When a run, hike, or walk session is logged, it uses the phone’s GPS to show distance traveled and pace, and the Charge HR’s heart-rate monitor to graph out time spent in the different heart-rate zones. It also shows the impact that the activity has had on the rest of the day. Users can also connect and compete with friends, as well as share metrics automatically or manually through Twitter.

While Fitbit packaging says that the Charge HR is water resistant, users are reminded in the online documentation that it should be taken off before showering and should never be worn while swimming.

The Charge HR comes with the tracker, a USB charging cable, and a USB sync dongle that allows for automatic, all-day syncing with a computer.

Getting the Charge HR set up and ready to use is smooth and painless thanks to Fitbit’s free app (available for iOS and Android), which has become our favorite for fitness tracking. Turn on the phone’s Bluetooth and pair the band with the phone by entering a code that appears on the band’s display. Answer a few profile questions (gender, height, weight, and age) and the Charge HR is ready to go. Setting it up on a home computer is just as easy. Download the Fitbit app, plug the USB dongle into an open USB port, and follow the onscreen instructions.

Users can also connect and compete with friends, as well as share metrics automatically or manually through Twitter.

The setup process now diligently commands users to keep the Charge HR dry and clean, and give their wrists occasional breaks from wearing the band. Last year’s rash episode has obviously left its (red, itchy) mark. The company is careful to make sure users understand that the best way to keep the band clean is by using a “soapless cleanser” like Cetaphil or Anquanil, and that if any redness or soreness appears on the wrist the band should be removed. That said, we’ve been wearing Fitbit bands (including the Force) of and on for the past two years and have never had any skin or wrist issues.

The Charge HR functions much like a digital watch. It doesn’t have a stopwatch, but it does show the time after either a press of the button on the left side of the watch, or with two quick taps on the face of the display. Scrolling through the rest of the metrics is done by pressing the side button repeatedly.

The most disappointing Charge HR feature was initially the heart-rate sensor itself. Aside from making us feel a bit like a cyborg each night on account of the green glow of the optical sensor beaming out from our wrist, in most all of our active testing, the heart-rate data produced by the Charge HR was simply wrong. During sleep or when sitting nearly motionless, the numbers would be in line with reality. But when we viewed our heart rate during exercise, we found the numbers to be quite erratic. We regularly wear a heart-rate monitoring chest strap, so on one run we used both the Charge HR and a chest strap (paired to a Garmin cycling computer) to view both readouts concurrently. Invariably, the Charge HR would be 20 to 30 beats per minute higher than the chest strap rates during exercise, and between 5 to 15 beats higher during regular walking.

Maybe perfect accuracy is asking too much. This isn’t a piece of medical testing equipment, after all. Yes, the step tracker likely deviates from the total number of steps taken during a day by a factor of X, and the calories burned during the day are not exact either. But focusing on precision is missing the point. The point is getting a better understanding of our overall daily movement trends, and creating better habits by tracking that movement over time. This is what eventually helps us live healthier, better lives.

For instance, the Charge HR did clearly show moments of elevated heart rate while running or climbing a large set of stairs, and let us easily view when we exercised, and how hard the workout was compared to the rest of our activities for the day or week. That is useful information that cannot be captured without a heart-rate sensor. So even though we found it less that accurate, the data was still valuable to overall analysis.

Fitbit says the Charge HR’s lithium-polymer battery will last up to five days on a charge, however, we never ran it that long without plugging it in. Since you can’t wear it in the shower anyway, we used that time to let it charge. By doing that every few days, we were never in danger of running low on battery power. The app also makes it very obvious when the charge is getting low. Those who need extra prodding can even receive an email or SMS reminder when the band needs to be charged. Yes, it is that simple.

We’ve been Fitbit fans since first trying the Fitbit Flex. For us, the programmable vibration alarms alone make the Charge HR band worth owning. Waking up to the brain-scrambling blast of an audible alarm seems like cruel and unusual punishment after months of being tickled awake by a Fitbit quietly buzzing on our wrist. And now that we can turn our smartphone ringer off and let the Charge HR vibrate to alert us to incoming calls, we’re so happy with the band that the fitness tracking (and heart-rate issues) seem almost trivial.

The big question isn’t whether to get a Fitbit, it’s which one. If heart rate is important, but GPS and text-messaging notifications are not, then the Charge HR is the right tracker. After our issues with the heart-rate sensor, we’d probably be fine with the basic Charge model. But those who need both call and text notifications on their band would be better off with the more expensive, larger Fitbit Surge. After our testing, we could make the argument for owning more than one. We like sleeping with the Charge HR and wearing the Surge as a daily watch, but that might be overkill.

The best news is that no matter which band you choose, it will work seamlessly with the Fitbit app and create an easy, stylish way to improve your understanding of your fitness.

Topics
Video-editing app LumaFusion to get a Galaxy Tab S8 launch
Best Fitbit in 2023: 6 best watches and trackers
Samsung Galaxy S23: release date, specs, price, rumors, and news
The best QR code scanning apps for iPhone and Android in 2023
This Apple leaker just revealed tons of changes for iOS 17 and iPhone 15
The best iPhone games in 2023: 31 games you need to play right now
Beats Studio 3 headphones are $120 off today at Amazon
How to cheat in Words With Friends
Trading in your iPhone with Apple? You’ll get less than yesterday
3 reasons you should buy the Google Pixel Watch today
The Galaxy Z Fold 4 isn’t just a good phone — it’s also my favorite computer
This is the OnePlus Pad — the OnePlus tablet we’ve waited years for
My iPhone 14 Pro camera is ruined, and it’s all Apple’s fault