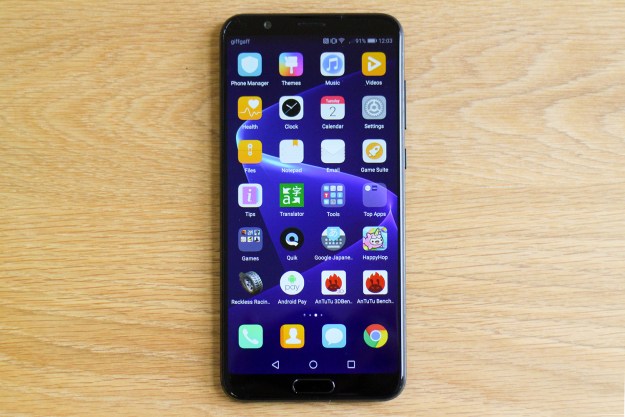 “Honor stuffs the best mobile processor it has access to into a phone that’s cheaper than its rivals.”

The Honor 7X is easily one of the best value smartphones released in 2017. But Honor isn’t only about budget phones with plenty of bang-for-your-buck. It’s taking on OnePlus with the Honor View 10 — a phone with flagship specifications as well as mobile artificial intelligence. If you’ve been enviously looking at the great Huawei Mate 10 Pro, but can’t stomach the price, we’ll show how this alternative will see fewer dollar bills fly out of your wallet.

We compare the Honor View 10 to the Huawei Mate 10 Pro often in this review, and there’s a reason for this: Honor is a subsidiary to Huawei, and the two companies share technology. Think of Honor as Mini to Huawei’s BMW. The Honor View 10 is closely related, but design is where the biggest differences are found.

The body is metal with a matte finish, and our review model is in a stealthy black, with concealed antenna bands on the top and bottom of the phone. It also comes in Honor’s trademark blue. We appreciate the minimalist gleam of the Honor View 10, but it’s not a fabulous looking phone. Compared to other flagships — from the Mate 10 Pro to the OnePlus 5T — it’s faceless. The fingerprint sensor is on the front, leaving the back of the device untouched aside from a pair of protruding camera lenses.

If the Honor View 10 was yellow, it would look like a Minion.

These camera lenses poke out by a couple of millimeters, and aren’t encased in a OnePlus 5T-style bump. We don’t care for the look at all, and would rather the body was blended around them, instead of sticking out. If the Honor View 10 was yellow, it would look like a Minion.

Barring this, the Honor View 10 is comfortable to hold and lightweight. It’s only 6.97mm thick, but it does slip about in your hand, even when placed on a flat surface. Plus, the back of the phone can get mucky with fingerprints. You’ll need a case.

Sit the Honor View 10 next to the Huawei Mate 10 Pro, and it’s obvious which is the more expensive smartphone. You’ll pay more for it, but if you value aesthetics and a wonderful, expensive in-hand feel, then it’s worth it. If it’s not a massive concern and the price tag matters, then read on.

The Honor View 10 is the second smartphone with the Huawei Kirin 970 processor and the Neural Processing Unit inside. The NPU provides on-device artificial intelligence processing, rather than handing all of it off into the cloud. It’s better for speed, privacy, and performance. The Honor View 10 has 6GB of RAM and 128GB of internal storage. Let’s put it up against the Huawei Mate 10 Pro in a series of benchmark tests.

How close are the scores? Essentially identical to the Mate 10 Pro. Honor’s pulling the same trick as OnePlus, by stuffing the best mobile processor it has access to into a phone that’s cheaper than its rivals. We like that a lot.

The screen gets bright, it’s colorful, and it looks great

After running these tests, and also when playing graphically-intensive games, we did notice the body of the Honor View 10 gets quite warm. Not dangerously so, or where it became impossible to hold; but the phone definitely gets hotter than we expected — hotter than the Mate 10 Pro. Regardless, we enjoyed playing games on the Honor View 10, and we experienced no performance problems. This is no surprise, the Kirin 970 makes special use of Android 8.0 Oreo’s gaming prowess to smooth out performance.

The Honor View 10 minimizes the bezels around its FullView 6-inch screen, which has an LCD panel rather than an OLED screen. It’s not quite to the degree of the Mate 10 Pro or the Galaxy S8. The upper and lower bezels are also slightly larger than the OnePlus 5T. While far from oversize, the Honor View 10’s larger bezels are obvious when compared side-by-side with the competition, and evidence of this is clear with Honor retaining the fingerprint sensor on the front of the phone. It still has an 18:9 aspect ratio though, and you can force apps to run in fullscreen to make the most of it. The screen gets bright, it’s colorful, and it looks great — just as we’d expect from Huawei and Honor.

Those ugly camera bumps on the rear contain a 16-megapixel RGB lens and a 20-megapixel monochrome lens, a slightly different setup to the Mate 10 Pro. The aperture is f/1.8 with PDAF auto-focusing, a bokeh mode, and the NPU-powered scene and object recognition. The latter changes the camera settings, such as color, contrast, and exposure, without you having to do anything except point the camera in the direction of your subject.

It’s undeniably a very cool use of AI technology, and based on the icon that appears on the screen, it understands what the camera sees — sunny day, greenery, or even an animal. However, it’s very difficult to actually ascertain the difference it makes to the picture. It’s not like an HDR mode, where you can turn it off to compare  and judge the effect. We felt the same about the Mate 10 Pro, which has the same tech.

But there’s no denying the Honor View 10 takes great pictures, a must-have feature in the race to win the best smartphone title. It’s missing the Leica tuning and color modes found on the Mate 10 Pro, but it’s hard to say the camera is worse for it. We love the monochrome mode, which does an good job of transforming the mood of a scene, and the versatile bokeh mode, where it’s easy to manipulate the results for the best look in the gallery later on. The Portrait mode operates on the front and the rear camera, plus the editing software is comprehensive, to the point where you don’t really need an additional app.

Put simply, the Honor View 10’s camera is a great all-rounder, and you’ll be proud of the images you take with it. The Leica camera is a massive highlight of the Mate 10 Pro, and the closely related camera on the Honor View 10 is a big selling point as well. If you’re wondering how the two compare, the Mate 10 Pro does take better pictures, with the Huawei phone providing greater clarity and detail, along with more realistic colors. It’s noticeable when the two are compared side-by-side.

The NPU doesn’t just drive the camera. In addition, the on-device AI is also used to speed up Microsoft’s Translator app, which comes pre-installed. Behind the scenes, the NPU processes images faster, and increases the speed of general AI-related tasks. It’s almost impossible to understand where (and even if) these speed improvements happen. We trust that they do, and the Honor View 10 certainly has never slowed down even under pressure. We hope more developers utilize the NPU’s ability more in the future, to bring these improvements to all third-party apps.

Honor has built in some of the AI-powered security features it experimented with on the Honor Magic. The face recognition system is by far the most useful. It hides lock screen notifications away from prying eyes, only revealing them when the front camera sees your face. Anyone else only sees the name of the app generating the notification, rather than its contents. It’s similar to Apple’s use of FaceID on the iPhone X. A subsequent software updated added face unlock, smart rotate, and intelligent screen on.

Face unlock works very well. The phone recognizes when it has been picked up, and the lock screen appears with a padlock icon at the top. In a fraction of a second, the padlock unlocks and you’re instantly transported to the home screen: No fingerprint required. It’s not quite as fluid as the OnePlus 5T experience, but it’s still fast and convenient. It’s not a security system though, so isn’t compatible with Android Pay. Smart rotate keeps the screen in portrait orientation if the camera “sees” you laying on your side. It doesn’t work in all apps, but Gmail and Chrome both benefit from this handy feature. Finally, the Honor View 10 will keep from dimming the screen if it sees you’re looking at it.

The Honor View 10 has Android 8.0 Oreo installed, along with the November 2017 security update on our review phone, plus Huawei’s EMUI 8.0 user interface. Oreo is fast, smooth, and logically presented. Version 8.0 means you get the notification blobs on relevant icons, along with picture-in-picture mode if you’re prepared to put in the time (or spend the money) to get it working.

There are a few pre-installed apps, like the Quik video editor and some game demos, along with EMUI’s email, calendar, file manager, and other system apps. Apps are spread across the home screen, but an app drawer can be added through the Settings menu if you prefer.

There’s 128GB of storage space as well as a MicroSD card slot, so you won’t run out of space inside the Honor View 10 very soon. The battery has a 3,750mAh capacity, and comes with EMUI’s various battery modes to lengthen the standby time, including an Ultra Power Mode for up to a week of standby. We’re still testing, but so far the Honor View 10 gives a full day of use with a single charge.

Honor hasn’t let the slim-bezel screen stop it including a 3.5mm headphone jack, which can be found on the bottom of the phone, alongside a USB Type-C charging port. Use it with the included charger and you’ll get fast charging. Honor promises 50-percent capacity will be reached in 30 minutes.

In the U.K., the Honor View 10 launched on January 8 for just 450 British pounds, around 250 British pounds less than the Mate 10 Pro. Unquestionably superb value. The phone can be purchased through the HiHonor online store and Amazon. Honor gives a year’s warranty on its phones in the U.K. with six months on the battery and charger. It’s also sold in India, France, Germany, Italy, and Spain.

The Honor View 10 is a highly-affordable alternative to more expensive phones, with a must-have 18:9 display and a super camera.

Are there any better alternatives?

The other big contender is the OnePlus 5T. It’s not the same beast, with OnePlus going for simplicity and focus, over the Honor phone’s plethora of features. Both have 18:9 screens, dual-lens cameras, and super fast processors. You definitely get “more” with the Honor View 10; but we like the stripped down no-nonsense approach of the OnePlus 5T. The decision will come down to software preference. The OnePlus’s OxygenOS provides a closer-to-stock Android experience, while the Honor phone’s EMUI is considerably more customized.

If you’re looking a the Honor View 10 and actually have a larger budget, then we’d recommend the Google Pixel 2 XL. Yes, it’s much more expensive, but it’s consistently impressive and benefits from software and updates in a timely fashion directly from Google.

The Honor View 10 isn’t water resistant or particularly tough, so if you drop it and it either breaks or gets wet, then it’ll be an expensive repair. Honor, like Huawei, isn’t especially fast at updating its software either, so you may be stuck on the software it comes with for a while. This isn’t a big concern right now, because the phone has the latest Android build installed, which is great news.

Yes, you should buy it. The Honor View 10 is another great value smartphone from Honor, joining a massive list of excellent devices we’ve seen from it and others over the past 12 months.

Update: We’ve added more about the U.S. release and price.