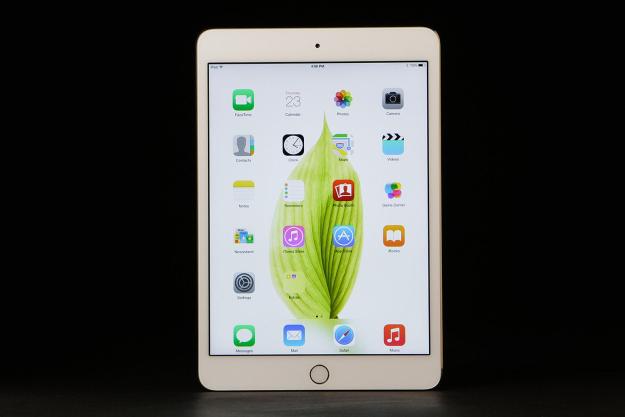 “This is a fantastic iPad Mini, but it’s a terrible deal. We recommend you buy a cheaper 32GB iPad Mini 2 and wait a year to get a fingerprint sensor.”

Typically, the launch of a new iPad is a big deal — not so with the iPad Mini 3. The latest small iPad from Apple has only really changed in two respects: it’s now available in gold and has a Touch ID sensor. Everything else – from design and dimensions to specs and performance – is exactly the same.

The iPad Mini 3 comes with an upgrade that’s as modest as can be. Of course, Touch ID adds more than just an element of security to the Mini 3. It can also be used to pay for in-app purchases with Apple Pay. That nifty new feature will cost you an extra $100, though. Is it worth it? We took a look at the third-generation iPad Mini to find out.

Apple may have shaved a few millimeters off the iPad Air 2, but it didn’t diminish the Mini 3’s dimensions at all. The 7-inch iPad still measures 200 × 134.7 × 7.5 millimeters and weighs 331 grams – just like last year’s model. The volume buttons and rotation lock are positioned on the right-hand side and the two rows of speakers remain at the bottom of the iPad Mini 3.

We picked up a gold review unit to see how the new color option looks on an iPad and we really liked the way it shines. The gold accent encircling the Touch ID fingerprint sensor looks truly beautiful. However, if gold bling’s not your thing, the silver and space-gray color options are still available.

As always, the smaller iPad feels great to hold. Like every Mini before it, the iPad Mini 3 is ideal for reading ebooks and browsing the Web. Its 7.9-inch screen hits a real sweet spot – not too big, not too small. Although the Mini 3 doesn’t have a sharper screen that its predecessor, its 2,048 × 1,536 pixel resolution screen contains 326 pixels per inch, which is higher than that of the iPad Air 2.

Still, it’s lower than the nearly 360 pixels per inch Samsung crammed onto the Super AMOLED screen on its Galaxy Tab S 8.4. That said, the Mini 3’s screen looks just as good if not better than that of the Galaxy Tab S, which tends to over-exaggerate colors sometimes. While watching TV shows on Netflix, the Mini 3’s retina display faithfully displayed the colors and minute details appeared sharp.

If there was any doubt as to which iPad Apple considers a priority — and which wagon to hitch your wallet to — it should now be crystal clear. While the iPad Air 2 received a massive processor upgrade with the A8X chip and M8 motion coprocessor, the Mini 3 was left behind in the dust with the same old A7 processor and M7 coprocessor.

It’s not that the processor is slow or out of date. In fact, the Mini 3 performs Web searches, streams videos, and handles other common tasks without incident. We streamed Netflix videos in Full HD and the Mini 3 didn’t stop to buffer once. However it’s certainly not up to snuff in comparison with the iPad Air 2.

Like every Mini before it, the iPad Mini 3 is ideal for reading ebooks and browsing the Web.

Like the Air 2, the entry-level iPad Mini 3 comes with just 16GB of storage. At this point, it’s unacceptable to offer such a limited amount of space on a tablet, especially given the lack of MicroSD card slot for memory expansion. People like to watch movies and TV shows on their tablets and videos take up a lot of space. Unless you stream all your videos, you’ll probably start dreaming of the 64GB Mini 3, even though it’ll cost you $100 more.

For those of you who are curious about the numbers, the iPad Mini 3 scored 14,064 on the 3D Mark Ice Storm Unlimited benchmark test. In comparison, Samsung’s Galaxy Tab S 8.4 managed just 13,070 points. However, the iPad Air 2 completely outclassed the Mini 3 in this benchmark test. The Mini 3 performed well in the Geekbench 3 test with a single-core score of 1375 and a multi-core score of 2478. Even last year’s iPad Air bested this year’s Mini in that test. Needless to say, the Air 2 blew the Mini 3 out of the water.

Related: The best part about the new iPads is Apple’s deal on old ones

Benchmarks aren’t everything; unless you play heavy games on your iPad you probably won’t notice the difference. But it’s hard to justify spending $100 more on a device with last year’s specs. The only real improvement made to the iPad Mini 3 is the addition of Touch ID. Touch ID is a great security measure for those who share a single iPad with the entire family, those who carry sensitive info on their tablets, and users who want to shop online. Thanks to iOS 8.1, the Touch ID fingerprint sensor may not let you tap to pay at the register, but it does allow for easy purchasing online with Apple Pay in specific apps.

At this point, Apple Pay for apps is still pretty limited, but once it makes its way to restaurants and more big-name retailers, it may become the killer app for online shoppers. The addition of Touch ID sweetens the deal, but it doesn’t make the iPad Mini 3 a must-buy.

iOS 8 also offers subtle improvements over iOS 7 and looks great on the Mini 3. You can now choose any third-party keyboard you want, share apps and other iTunes purchases with Family Sharing, monitor battery life, and use Apple Pay to make purchases. Apple also boasts that there are 675,000 different iPad-specific apps on its App Store that are optimized for its tablets.

No camera upgrades for you

The iPad Air 2 may have one of the best cameras of any tablet, but the Mini 3 is stuck with the same 5-megapixel iSight camera on the back. It takes decent photos compared to any other non-Apple tablet, but in comparison with shots we took with the iPhone 6’s camera, the Mini 3’s photos are noticeably less detailed and not as sharp. The details of buildings photographed at a distance were neither blurry nor perfectly crisp. The camera’s not a standout, but it’s not a disaster either, which is more than we can say for most tablet’s cameras.

The Mini 3 has a 1.2-megapixel front-facing camera too, which works well enough for Skype calls and video chats.

The iPad Mini 3 sports a 23.8-watt-hour battery that Apple says should last 10 hours. We’ve only had our hands on the Mini 3 for a day, so we can’t tell you how long the battery lasts just yet. We will update this post after we’ve used the Mini 3 for a while.

If you’ve made it this far, you’ve probably noticed that there’s almost no incentive to buy the iPad Mini 3. In fact, it’s a much better deal to buy the second-generation Mini instead, since Apple cut its price by $100. You can get an iPad Mini 2 with 32GB of storage for $350, but a Mini 3 with just 16GB of storage will cost you $400 and a 64GB model costs $500.

It’s a no-brainer: the iPad Mini 2 is the better deal. Touch ID is great and gold is a very attractive color, but neither feature is worth the extra money.

If you want an iPad Mini, the second-generation model is the best choice.  Those of you who might want a larger screen should absolutely check out the iPad Air 2, but be aware that you’ll pay a premium for it.

Operating system agnostics should also look into the Samsung Galaxy Tab S 8.4. It offers a slightly bigger screen, fast processor, sleek design, and all the perks of Android. Samsung positioned the Tab S line to compete with Apple’s iPads, so both models are worth a look.

The iPad Mini 3 is undoubtedly a fine tablet – it just doesn’t offer enough compelling new features to tempt us.

Topics
Video-editing app LumaFusion to get a Galaxy Tab S8 launch
The best grocery list apps for iPhone and Android in 2023
Samsung Galaxy S23: release date, specs, price, rumors, and news
This is the OnePlus Pad — the OnePlus tablet we’ve waited years for
The best QR code scanning apps for iPhone and Android in 2023
Is the Samsung Galaxy A14 5G waterproof?
The best fitness trackers in 2023: our 10 favorite picks
Watch the Galaxy S23 Ultra get unboxed a week before launch
The best iPhone apps in 2023: 50+ apps you need to download now
The iPhone 15 Pro’s rumored new design is one I can’t wait for
The best folding phones in 2023: our 6 favorite foldables right now
You can finally take ECGs and track AFib on a Garmin smartwatch
I bought a $50 Apple Watch Ultra clone, and it blew me away