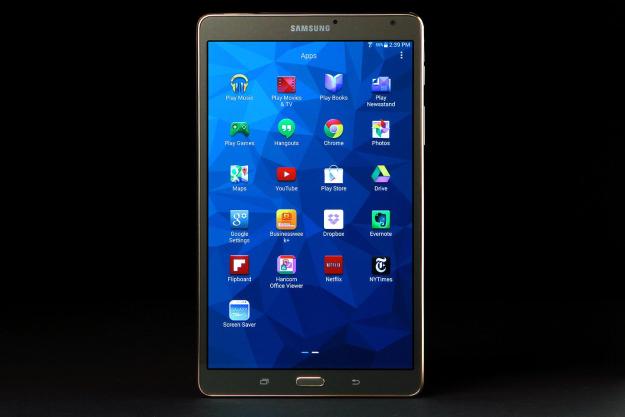 “If you’re an Android user and want the best small tablet around, the Samsung Galaxy Tab S 8.4 is what you’ve been waiting for.”

The 8.4-inch Tab S is a rare find these days. Most 8-inch tablets are mid-to-low-end devices, built to be cheap, not beautiful or powerful. Apple’s iPad Mini was just about the only quality 8-inch tablet available, that is, until the Tab S 8.4 waltzed onto the scene.

So how does it compare to the iPad Mini? Read on to find out.

(This tablet is very similar to the larger Galaxy Tab S 10.5. Read our full review here.)

A tablet designed to match the Galaxy S5

If you’re a Galaxy S5 user, the Tab S should look very familiar to you. The design language is identical from the dimpled, faux leather plastic back, to the gilded metallic edging.

There’s no denying that the build quality is not as refined as the gorgeous aluminum on the iPad Mini with Retina display, but considering that’s its plastic, the 8.4-inch Tab S looks pretty good.

One advantage to the plastic back is that it makes the Tab S 8.4 significantly thinner and lighter than the competition, even though it’s on the big side.

The 8.4-inch Tab S measures just 125.6 x 212.8 x 6.6 millimeters and weighs 10.37 ounces, making it one of the most svelte 8-inchers currently on the market. It’s even thinner and lighter than the shockingly svelte, 7.5-millimeter thick iPad Mini with retina display, which weighs 11.68 ounces. That is an achievement.

In fact, the Tab S almost lighter than the 10.23 ounce Nexus 7, which is pretty impressive.

High-end specs and a display made for movies

The smaller Tab S features an 8.4-inch Super AMOLED screen with the same stunning resolution of 2,560 x 1,600 pixels as its bigger brother. The screen is as beautiful and vivid as Samsung would have you believe, but it’s hard to see a use for all those pixels on this smaller tablet.

Samsung claims that its S line is intended for enjoying movies, TV shows, and glossy magazines. The display is beautiful, but chances are, if you’re buying an 8-inch tablet, you’re not really planning to watch too many movies on it. The magazine aspect is slightly more believable, or it would be, if people actually still bought magazines.

The 8.4-inch Tab S is powered by Samsung’s own Exynos 5 Octa processor and 3GB RAM. During our tests, there were occasional hiccups while launching apps and sometimes, webpages refused to load.

Samsung offers either 16 or 32GB of storage and a MicroSD card slot lets you expand that amount up to 128GB, so there’s plenty of potential storage space, if you need it.

In terms of connectivity, the Tab S comes with Wi-Fi, Bluetooth, and MIMO. As an added bonus, Samsung threw in the same fingerprint sensor found on the Galaxy S5 smartphone. The fingerprint sensor is undoubtedly cool and could prove useful if you want to share your Tab S with your family, but it’s still awkward to swipe your finger in a downward direction on a button that’s on the very bottom of the tablet. Apple’s Touch ID sensor is a little easier because you just have to hold your finger on it.

In benchmark tests, the Tab S 8.4 performed extremely well, outpacing most other devices.
It scored 8,970 on the 3D Mark Ice Storm Extreme benchmark and 13,070 on the Ice Storm Unlimted test. The iPad Mini scored slightly higher with 14,171 on the Unlimited test, but the difference likely isn’t noticeable in any meaningful way.

The smaller Tab S also scored 18,836 on the Quandrant benchmark test, which is really impressive. In the Geekbench 3.0 test, it managed 1,280, as opposed to the iPad Mini’s score of 2509. That said, benchmarks aren’t everything. This tablet is capable of running the best apps and games available on the Android platform in 2014. That’s really all that matters.

Since Samsung can’t leave well enough alone, it’s put the Touch Wiz UI on top of Android 4.4 KitKat. We didn’t find Touch Wiz terribly annoying, but it doesn’t really add all that much to the user experience.

We never really felt inclined to use the important tiles Samsung lined up for us on one of the home screens and the Papergarden app, though nice, seemed superfluous, given all the other magazine reading apps that already exist.

However, underneath it all, KitKat is smooth and runs well.

The Galaxy Tab S 8.4 comes with a hefty 4,900mAh battery, which will get you through a transatlantic flight and then some.

Samsung added the special adaptive display battery-saving function, which turns the screen brightness down when you don’t really need it cranked all the way up. This feature certainly keeps the battery going for a long time, but it can occasionally overcompensate, giving you too little brightness. Additionally, if you actually do end up watching tons of movies on it as Samsung suggests, the battery will conk out sooner because of the high-res display.

Samsung claims that the Tab S can last through up to 12 hours of video playback. All in all, we found Samsung’s estimate to be close to accurate, which is very impressive.

Samsung launched so many tablets in 2014 that it’s impossible to keep track of them all. So far, only a few have stood out from the pack; the Galaxy Tab S 8.4 is one of them.

Before Samsung launched the Tab S line, it didn’t have a true iPad competitor, but now it does. If you’re an Android user with a fondness for smaller tablets, the Samsung Galaxy Tab S 8.4 is the one you’ve been waiting for all along.