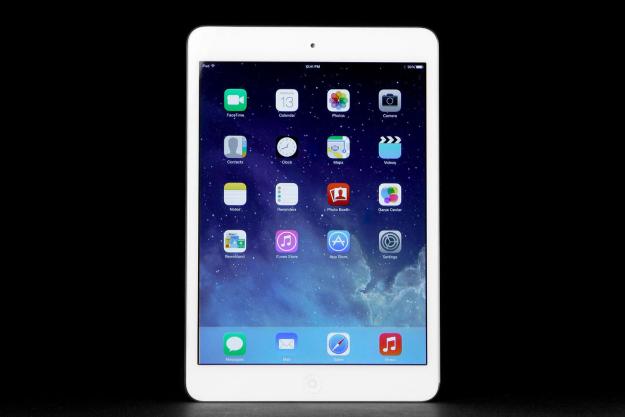 “The second iPad Mini is our favorite tablet of 2013, and the current tablet to beat. We wish it cost less than $400.”

The iPad Mini is a year old, but it spent its first year wearing a crown. Almost instantly, it went from becoming the iPad Mini to becoming the iPad everyone wants to have. There’s a reason for that, too: It’s the best iPad. The only problem with it was its weak processing power and screen. This year, Apple is hoping to fix both of those problems with the “iPad Mini with Retina Display” which will be called the “iPad Mini 2” and “iPad Mini Retina” from here on out.

Like our iPad Air review, instead of the standard run through of each feature, we’ll instead answer the questions below.

We’ve been using the iPad Mini 2 for a few days now, and here are our best answers.

(Some portions of this review are similar to our review of the iPad Air. This is because, under the hood, these tablets are very similar.)

What’s better about the iPad Mini 2?

Gorgeous, high-resolution screen: The new iPad Mini may have the best screen we’ve ever seen on a tablet. It has the same 2048 x 1536 pixel screen as the full-size iPad Air, but its screen is 2 inches smaller, making everything that much sharper. This is the screen we wished we had a year ago, and we’re happy Apple finally included it. The screen gets plenty bright, too. There are no complaints to make about this screen.

Still incredibly thin and light: The first iPad Mini was perfectly petite, and so is the new one. The second-generation iPad Mini weighs 341g, or .75lbs, which is still a trend-setting weight. It’s light enough to hold in one hand, and its 7.5mm (.29-inch) depth and 134.7mm (5.3-inch) width make it small enough for most people to grip with one hand, too. Mind you, it won’t be a comfortable grip, but you can hold it.

This one fits just right: Continuing the size conversation, we believe the iPad Mini is the maximum size for a compact tablet and the minimum size for a full-fledged tablet … meaning we think it is the perfect size. Its 8-inch screen is perfect for most anything. Unless you have a reason to go bigger, we recommend this one.

It has a 64-bit processor: Like the iPad Air, the other advancement here is in processing power. Apple managed to pack in the new 64-bit A7 processor and special M7 motion processor that it debuted on the iPhone 5S in September. This won’t mean much to you if you aren’t a heavy gamer or use a lot of complex apps, but in our experience, the iPad Mini 2 (like the Air) is a lot snappier than other iPads when it runs iOS 7.

We’ve been playing a lot of Infinity Blade III and Modern Combat lately. They look gorgeous and run smoothly. Adam, from our gaming team, thinks iPad Mini 2 may usher in a new wave of games for the iPad because it’s so comfortable to hold for gaming.

We’ve been playing a lot of Infinity Blade III and Modern Combat lately. They look gorgeous and run smoothly.

We performed a GeekBench 3 benchmark test and the Mini with Retina got a 1392 single-core score and a 2519 Multi-Core score. For comparison, the new iPad Air got about a 1475 single-core score and a 2641 multi-core score. These are just numbers, but its clear that both the iPad Mini Retina and iPad Air are lightyears ahead of older iPads. The iPad 4 got a 784 single and 1429 multi in this test, and we performed the benchmark on the iPad 3 and it only scored a 260 single and 350 multi. Last year’s iPad Mini got a 261/493.

iOS 7 runs smoother: If you own any recent iPhone or iPad, then you already have iOS 7, most likely. It has some problems, but we like it. You can read more about it in our full iOS 7 review, but as we said in the specs section: it runs best on new hardware, like the Mini 2.

Battery life is still good: No advancements have been made in the area of battery life, but despite the new Retina screen and faster processor, the iPad Mini 2 still gets the 10 hours iPads have always gotten. We did notice much faster battery drain when we watched Hulu videos and played Infinity Blade III though. This is typical, but the new screen certainly isn’t positively impacting the battery.

MIMO Wi-Fi is faster: We noticed faster Wi-Fi loading pages than previous devices, which we think is thanks to the new MIMO (Multiple In, Multiple Out) Wi-Fi antenna design. This is a small improvement, but should help you keep your Wi-Fi connections. The iPad Air also has this feature.

What’s worse with the iPad Air?

Most everything about the iPad Air is an improvement from previous models, but we do have a couple complaints.

Rear camera is the same: We took some hits in our iPad Air review by users who claim the camera is better. The new iPad Mini has the same exact rear camera (so far as we can tell) and we still notice no improvements to the camera outside of the new iOS 7 app. It cannot do the burst shots of the iPhone 5S and the auto-focus is much slower than the new iPhone. There isn’t anything to complain about here, but no real advancements have been made.

Where’s the fingerprint sensor? The iPad Air, and older iPads didn’t have a Touch ID sensor in them, but we’re sad that Apple didn’t include this iPhone 5S innovation in the iPad Mini 2. It’s convenient and pleasant to unlock our phone and make App Store purchases by simply holding a button instead of entering a long password. We didn’t think this would bother us, but entering passwords in the App Store has already gotten really old. We look forward to Touch ID iPads next year.

It’s ever-so-slightly bigger than last year’s iPad Mini: You probably won’t be able to tell, but the new screen and processor came with a small cost. The new iPad Mini is .3mm thicker than last year’s model (.29 inches vs. .28 inches) and weighs 23 grams more (.73lbs vs .68lbs). The difference is slight, but it is there.

At $400, the new Mini is one of the most expensive compact tablets out there, but if you have the money, we suggest you spend it. And if you don’t, wait a couple months and save a little. This may be $400, but it’s just as good as the standard $500 iPad Air, and better when you consider how much more comfortable its size is.

Vs. iPad Mini: If you’re considering buying last year’s iPad Mini, which is now $300, it’s still a good buy, but you will lose a lot of processing power and the high-res screen. The standard Mini also only comes with 16GB, so if you want 32, 64, or 128GB of storage, you’ll want to opt for the Mini 2.

Vs. LG G Pad 8.3 and Nexus 7: We’re big fans of these two Android tablets. The LG G-Pad 8.3 is powerful, has an 8.3-inch screen, and costs $350. It’s probably our second favorite tablet this holiday season. But right behind it is the Google Nexus 7, which costs much less at only $230. You lose a little power and the screen is smaller, but it’s still Full HD. Android tablets are easy to use, but do not have as many top-quality customized apps as the iPad. But they are definitely good enough.

Vs. Kindle Fire HDX: The Kindle Fire HDX ($230) packs some power, but the big difference, as always, is that the Fire is only for those who use Amazon services a lot. You can get every Amazon app (MP3, Kindle, Instant Video, etc) on the iPad Mini and Android tablets, but you can’t get all all the Google and Apple apps on the Kindle Fire because it runs off of Amazon’s own app store, which doesn’t have a robust selection yet.

If you’re debating between the iPad Air (or iPad 2) and the iPad Mini 2, we recommend you go with the Mini 2.

The iPad Air is probably the best 10-inch tablet we’ve ever used, but there is no competition here. If you want one tablet, hold out for the iPad Mini with Retina. Unless you have a specific need for a big screen (bad eye sight, big hands, or maybe you like GarageBand a lot?) we recommend you purchase an iPad Mini. Whatever you do, don’t pay $400 for the iPad 2. It’s a ripoff. It’s far weaker than the iPad Air (it’s hardware is 2 years old) and costs the same as the iPad Mini 2, which has the specs of an Air.

The iPad Mini 2 is our favorite tablet of 2013. With a powerful 64-bit A7 processor and a high-resolution ‘Retina’ screen, it finishes the job that Apple started with the first iPad Mini started. At $400, it’s a lot more expensive than other compact tablets, which now range from $100 to $350, but you are getting more for your money. This tablet has the performance of an industry-leading full-size tablet in a compact – better – form. It’s the tablet to beat.

Video-editing app LumaFusion to get a Galaxy Tab S8 launch
Best Apple deals and sales for October 2022
The best phones for 2022: Which smartphone should you buy?
Reverse wireless charging on the iPhone gets one step closer to reality
Does the iPhone 14 have an always-on display? Know this before buying
Google wants you to know Android apps aren’t just for phones anymore
I have a confession — I may have been wrong about the Apple Watch Ultra
The best Samsung Galaxy Watch 4 screen protectors
Can’t stand using Instagram in 2022? This app fixes everything you hate about it
Apple AirPods Pro 2 vs. Google Pixel Buds Pro
These 80+ apps could be running adware on your iPhone or Android device
Stage Manager is coming to older iPad Pro models after all
Samsung just copy-and-pasted iOS 16’s lock screen in its One UI 5 beta