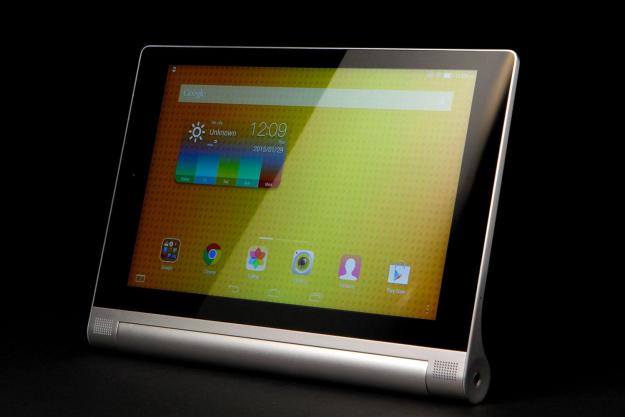 “Lenovo’s three Yoga Tablet 2 are an amazing deal. They have incomparable battery life and a fantastic design, but their software and specs are only so-so.”

Lenovo may not come to mind when you think about tablets, but the Chinese company is actually a pretty big player in the mobile industry. It’s been firing out tablets like missiles these past few months, and we’ve finally gotten a chance to take a look at its refreshed Yoga Tablet 2 line. The first devices that met with our inspection are the 8-inch, 10-inch, and 13-inch Yoga Tablet 2 with Android onboard.

Like all other Yoga tablets before it, Lenovo’s latest Yogas stand out from the crowd with their single, cylindrical edge and built-in kickstand. Neither tablet may have the most impressive spec sheet, but we’re fond of the astonishing battery life and outlandish design.

Lenovo’s Yoga tablets can never be lumped together with average Android slates, simply because their design is so unique. Instead of the standard, black, plastic, rectangle that other tablet makers are so fond of, Lenovo’s Yoga Tablet 2 features a cylindrical battery pack and a built-in kickstand on one side of the device. I found this design incredibly useful and refreshing. Typically, when you buy a tablet, you end up getting one of those cases that folds up like origami to make a stand for when you want to watch movies or type a message. Not so with the Lenovo Yoga Tablet 2 – This tablet has a kickstand right out of the box that can adjust to almost any angle you want and stay in place.

If you’ve used an iPad in the near past will feel right at home on the Yoga Tablet 2.

The kickstand hinge is sturdy, but not stiff. It’s a delicate balance to tread, but Lenovo does it well. The stand doesn’t stick out that much when it’s engaged either, so you won’t fell like you’re taking up a ton of room on a shared café table. Front-facing speakers are embedded into the kickstand on either side, and give off impressive sound for a relatively cheap tablet. Lenovo even drilled a hole in the kickstand, so you can hang your tablet on the wall and view movies. Admittedly, I never did hang it up, as an 8-inch screen seems too small for watching movies from any sort of distance, but still, it’s a cool feature, and one that’s much more useful on the larger 10-inch and 13-inch models of this tablet. It certainly makes watching movies a whole lot easier.

When the stand wasn’t open, I found myself using the curved edge to hold the somewhat heavy 8-inch Yoga tablet in one hand. The curved edge felt great against my palm, and I liked that my fingers had something tangible to grip – too often tablets fell like they’re going to fly right out of my hands if someone jostles me while I’m reading. After a while, though, the nearly 1 pound tablet got too heavy for my left hand, so I took to resting the right corner in my right hand while reading. It was sort of like reading a book with the cover and read pages folded over the side.

Needless to say, the larger, 10-inch model isn’t ideal for reading or holding one-handed. It’s much more of a multimedia device that’s well suited to playing the desktop, or displaying movies. The 13-inch Pro is fantastic for stationary tasks as well, but is too large to cart around comfortably.

Overall, I liked the oddly cylindrical end of the tablet, and it’s kickstand. Lenovo focused on using sturdy materials, and that really comes across. The stand is made of metal, and the back of the tablet is sturdy plastic. Although it’s no iPad, it feels more durable and strong than the Google Nexus 9, which is double the price of the Yoga 2, at $400. That said, the bezels are wide and it’s certainly not a high-spec tablet, though it is solidly mid-range.

The 13-inch Pro version has a projector

There is a small 50-lumen projector built into the side of the Yoga Tablet 2 Pro (it shoots right out one of the ends of the cylinder). It’s a great addition that we had a lot of fun with, but ultimately stopped using after the novelty wore off. It can project well in dark rooms and even angles the image to the wall, so it isn’t distorted at angles, but we often had a tough time focusing it, and if anyone turned on the lights, you couldn’t see a thing. Finally, we often had to prop up the end of our tablet to get the screen to be straight on the wall. These are all minor issues and didn’t prevent us from having a good time, but because of them, it’s unlikely that you’ll use the projector on a regular basis. It’s a fun little emergency tool. And again, only for the 13-inch version.

Neither screen nor processor is top-notch, but they perform well

Lenovo’s latest Yoga Tablet 2s aren’t going to win the award for best tablet, but they’re still some of the better mid-range slates we’ve tested. The 1920 x 1200 pixel screen isn’t super high-resolution and the colors often look weak – especially in comparison with the latest iPads or Google’s Nexus 9. However, the screen quality is on par with many other mid-range tablets. You can certainly watch movies and TV shows on them, though the wide bezels seem like a waste of space. Of course, you can get an iPad Mini 2 for just $80 more and you’ll get a lot more pixels, but then you’ll have to buy a case with a kickstand, which could run you $40 more. Is it really worth $120 more to get last year’s iPad Mini? We’re not so sure.

Lenovo decided to go with Intel’s 1.86GHz Intel Atom Z3745 processor and 2GB of RAM this time around. The combination offers up decent performance with minimal lags during most common tasks. The tablet didn’t stutter or slow while streaming HD video on Netflix, nor did it lag during Web searches. Occasionally, it took a few seconds for a video to load, but the tablet stabilized quickly. The only noticeable delays came when the screen was rotating, or Facebook posts were loading. The News Feed looked a little jerky when I scrolled through it fast.

Lenovo packed 16GB of storage into the tablet, which is pretty measly, but luckily, you can expand it up to 64GB via a MicroSD card slot. You certainly won’t find that option on Apple’s iPads, though most Android tablets give you that option.

Benchmark tests, while far from outstanding, were impressive for this mid-range tablet. The 3D Mark Ice Storm Unlimited test yielded a score of 15,704. To give you an idea of just how good that is, the high-end Dell venue 8 7000 Series tablet scored 20,331, Samsung’s Galaxy Tab S 8.4 only scored 13,070, and the iPad Mini 3 got 14,064 on the same test. The Yoga Tablet 2 also managed 16,015 on the Quadrant test, which is pretty competitive. These aren’t weak tablets.

Lenovo’s skin brightens up Android KitKat a little too much

Those of you who’ve used an iPhone or iPad in the near past will feel right at home on the Yoga Tablet 2. Lenovo’s skin takes away the app drawer, puts all your apps in endless home screens, and offers up brightly colored app icons, much like iOS 8 does. Even the settings menus are white and bright like Apple’s, as opposed to dark and dreary, though that is what you’d normally get from the Google Android 4.4 KitKat operating system that Lenovo’s skin is covering up.

The crowning achievement of the Lenovo Yoga Tablet 2 is its remarkable battery life.

As a huge fan of the Android 5.0 Lollipop update, which offers up white menus, cute app icons, and sleek Material Design elements, I was happy to see Lenovo’s brighter take on Android. However, the interface sometimes makes Lenovo’s tablets look like an old-school Apple products.

There are a bunch of Lenovo apps onboard, too, most of which you probably won’t use, since Google’s full app suite is right next-door. The lack of an app drawer may both some folks, but it’s easy enough to get used to after a while.

Tablets are not known for their cameras – nor should they be, in our opinion. Just like most tablets, the 8-megapixel camera on the back of Lenovo’s latest Yoga tablet is mediocre. Colors get washed out a lot, low-light shots look grainy, and It’s awkward to take pictures in the first place because of the tablet’s shape.

To top it all off, the focus is just terrible. If your hand wobbles just a little bit, the whole image gets incredibly blurry. Most humans won’t be able to take good photos with this tablet at all. If you’re having a camera emergency, sure, it’ll work, but it’s a bad idea to use this camera for any other reason.

The crowning achievement of both the Lenovo Yoga Tablet 2s is their remarkable battery life. Thanks to the cylindrical battery design, the smaller tablet packs a truly massive 6,400mAh battery, and the 10- and 13-inchers have a huge 9,600mAh battery. Although Lenovo says its tablets can last up to 18 hours, how long they last really depends on what you’re using them to do. Mixed use of Web browsing, video streaming on YouTube, and typical app use barely put a dent in the device’s battery life. However, pulling off a movie marathon will cut the time down. Regardless, Lenovo’s tablet outlasted every tablet in its class and outstripped some of the high-end ones, too.

Fintie Folio Case Cover ($11)
When you’re carrying a tablet in your bag, it’s always nice to know that it’s protected. This folio case will keep your tablet safe, but it’s also stylish with many color options.

Gambolex Bluetooth keyboard case ($29)
If you really want to use your tablet to get things done, you’ll need a keyboard case. This one connects via Bluetooth, but shouldn’t add too much bulk to your tablet.

Any of these three tablets will give you better battery life than you’ll get elsewhere.

Lenovo’s new Yoga Tablet 2 line may feature decent mid-range specs, incomparable battery life, and an intriguing design, but we can’t help but wish it were more high-end. These tablets could easily be great – but instead, they’re average. Had Lenovo bumped up the screen resolution, amped up that processor, and cleaned up the look of its Android OS, the new Yoga Tablet 2s would have had much more impact. Instead, the final impression you get is of decent, mid-range tablets that you can buy on the cheap, if you’re on a budget.

Of course, there’s nothing wrong with that. In fact, you could argue that Lenovo easily wins the mid-range tablet category, though that’s mainly because most tablet makers either try to out-do Apple’s iPads or hawk the cheapest, most terrible tablets possible. Powerful mid-range tablets are a rarity, so it’s good that Lenovo’s in that position with its Yoga Tablet 2 line.

Still, a Lenovo Yoga Tablet with a banging screen and zippy processor would be an amazing sight to see, wouldn’t it?