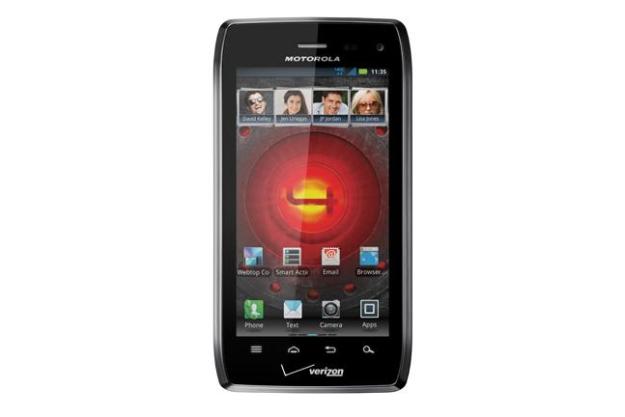 “If you want a phone that can tap into Verizon's 4G LTE network and you prefer a physical keyboard, then you can't go wrong with the Motorola Droid 4.”

Do you remember the Droid 3? It came out last July, bringing a fine update to the Droid line in almost every way. It had a dual-core processor, a slick new design, new software, and a new five-row keyboard. Unfortunately, Motorola underestimated the importance of one essential feature: 4G LTE. Without it, the Droid 3 quickly slid to the back shelf of Verizon’s sales efforts, replaced by devices like the Droid Bionic, HTC Rezound, Droid Razr, and Galaxy Nexus. Just seven months later, Motorola is attempting to revive the Android handset series that brought it to the mainstream. The Droid 4 runs almost identical specs to its predecessor, but with one key addition: LTE. Is it enough?

If you’ve ever picked up a Droid, you’d know that they’ve never been the thinnest or lightest handsets on the market, mostly thanks to their large slide-out keyboards and metal construction. The Droid 4 is a step up and down for the brand.

We’ll leave it up to you to decide if it looks good or not, but the Droid 4 follows the design aesthetics of the new Razr handset and Xyboard tablets. Gone is the metal casing, rubberized backing, and signature Droid antenna bump on the bottom of the handset. Replacing it is a new plastic frame (half an inch thick) with tapered edges and corners, giving it the hint of an octagonal shape (or maybe a phone out of Battlestar Galactica). The plastic design doesn’t give it a particularly cheap feeling, but we have to wonder how well some of the silver paint will hold up after a few months in and out of your pockets.

For those who are bothered when things aren’t flush, the Droid 3’s protruding camera issue is mostly absent from the new model. The camera sits exactly where the Razr’s camera is, and even has the same trapezoidal mirrored glass finish around it.

The button and port placement, on the other hand, are identical to the Droid 3. The power button is centered on top of the handset and the volume toggle is on the upper right side. The placement okay, but both buttons are a bit too thin and short to stand out and feel comfortable to press. This is a problem with the Razr as well. The main speaker is on the bottom left on the back, and the audio jack is up top, right next to the power. Micro HDMI and micro USB ports are both on the lower left side of the handset.

We’ve been bellowing on about the design of the phone, but honestly, it’s the feel of the QWERTY keyboard that matters. Nobody buys a Droid because of its looks. Luckily, though the rest of the handset is a bit of a mixed bag, we can safely say that the Droid 4’s keyboard is much nicer than the Droid 3, which was previously our favorite keyboard on a major carrier. This is our new favorite.

Like the Droid 3, the new keyboard has a dedicated number row, so you no longer have to hold the shift key to type out an address. The key layout remains mostly similar to the Droid 3 as well, though Moto has made some smart choices, like removing the odd secondary ALT functions of the standard keys. Instead, those functions have moved those to the number buttons, much like a standard laptop keyboard (Shift + 4 will make $, Shift + 5 will make %). This unclutters the look of the keyboard. A Symbol button brings up an onscreen menu for selecting other strange characters. The direction keys and OK button are also intact, which is nice.

Perhaps the most impressive part of the keyboard is how well it lights up. At CES, Motorola representatives told us that each key was individually lit. Honestly, we believe it. The entire keyboard illuminates brightly and each key has a glowing edge. It’s great.

The slide-out mechanism is much like previous Droids. There’s a bit of a snap when you open and close the QWERTY, so you know that it’s fully extended or hidden. The buttons also have a much better click to them than any previous Droid. With a bit of practice, Droid 4 users may be the fastest typists on a mobile device.

The processing power on the Droid 4 is par for the course. Unlike its predecessor, Motorola has upped the RAM from 512MB to 1GB. The processor has also switched from a 1GHz dual-core Nvidia Tegra 2 to a 1.2GHz dual-core Texas Instruments OMAP 4430. Internal storage still sits at 16GB, but there is a microSD slot, something the iPhone 4S and Galaxy Nexus do not have. Of couse, it also has all of the standard smartphone perks like an accelerometer, GPS, digital compass, barometer, and Bluetooth.

Though the Razr’s Super AMOLED screen showed promise, Motorola has relapsed. Like the Droid 3, Droid Bionic, Atrix, and Droid X2, the Droid 4 has a washed out, PenTile LCD display (read about it here). The 4-inch size and 540 x 960 pixel resolution (also known as qHD) of the screen is solid, though the Galaxy Nexus and HTC Rezound recently upped the bar with 1280 x 720 pixel displays. The problem stems from the cost-saving PenTile screen type Motorola has chosen. It just doesn’t measure up. While usable, the Droid 4 screen seems incapable of displaying vibrant, vivid color and a noticeable array of tiny black subpixels cover the screen, ruining the sharp fonts and icons that should come with a screen resolution this high. Some color banding can be seen in some situations as well.

Motorola has tried to cover up the screen’s problems with its NinjaBlur user interface, which re-colors Android 2.3 with a gray-and-dark-blue color scheme (these are two colors that actually tend to show up correctly).

We’ve been complaining and harping on Moto’s screens for months now. If you are like us, the phone’s lackluster display may cheapen your experience, but many of you may not notice it much at all. Until, of course, you see how colorful your friend’s new screen is. We recommend you try out the phone at a store and look deep into its screen. If it bothers you, move on.

As we said, the Droid 4 runs on Android 2.3 (Gingerbread), which has been modified and tweaked to look a bit different. Motorola calls its custom version of Android “NinjaBlur.” We’re not huge fans of its look and don’t feel it enhances Android much at all. With that said, there are a few nice widgets present, and thanks to the bump in RAM, and maybe a few software tweaks, the new Droid is far snappier than its predecessors. We do love speed.

Those hoping for an upgrade to Android 4.0 (Ice Cream Sandwich) will have to wait until sometime in the second quarter of 2012, but Motorola says that an update will come.

The apps preloaded are plentiful and range from helpful business apps like GoToMeeting to crappy Verizon preloads like Blockbuster video. Most of these seem to be removable, which is good. Motorola has also included a few of its signature apps, like MotoPrint, MotoActv, Task Manager, and the helpful Smart Actions, which lets you program your phone to do perform actions that you want. For example, you could set your phone to automatically turn off data and switch to Wi-Fi whenever you enter your house or apartment. Or you could set it to automatically turn off GPS when the battery is getting low. It’s a very unique and interesting app. We look forward to how Motorola enhances it in the future.

Though it appears Motorola has made some nominal enhancements to the 1.3-megapixel front camera and 8-megapixel rear camera, the new Droid still can’t match up to the camera quality present in Nokia, HTC, Samsung, or Apple devices. The shutter speed is slow, as is the autofocus, and most pictures appear washed out, sometimes even a bit discolored. No smartphone camera on the market takes fantastic pictures (you need a DSLR for that), but Motorola’s phones continue to disappoint in this area. We should note that the pictures taken indoors and in dark areas are a bit better than devices like Motorola’s Droid Bionic. And did we mention, when you snap a photo that old familiar sound of a flash recharging has been added?

The dedicated camera button is also still missing in action, as it was on the 3. Hopefully Motorola will consider re-adding it a future Droid. Until then, you’ll be snapping pics using a button on the screen.

Video quality is decent and seems to get the job done. It suffers from the same issues as the camera, but doesn’t seem to be as choppy as some devices, when recording at high resolutions like 1080p. In a pinch, this phone could help you record that moment when you see Darren Criss in line at the grocery store. Just don’t let him see you.

Like previous Droids, the Droid 4 has no problem with reception. Roaming around New York City, we haven’t had any reception issues yet. Call quality is pretty standard. We had no issues hearing or being heard in the conversations we’ve had on the phone. The speakerphone does its job as well.

4G LTE speeds have also held up. In our latest Manhattan tests, the device was getting 10Mbps to 20Mbps down and 6Mbps to 7Mbps up. Speeds vary, but Verizon’s network usually doesn’t skip below 5Mbps or 6Mbps on the download.

Unlike the Droid 3, Motorola has removed the GSM world-roaming capabilities from the Droid 4. It only runs on Verizon’s CDMA and LTE bands, meaning you’re out of luck if you travel outside of the US, most likely.

We’re still testing the battery life on the Droid 4, but it’s currently about on par with the Droid Razr. It seems to get about a third more life out of a charge than the Galaxy Nexus, which should get most of you through a full day. For us, the Galaxy Nexus has been extremely disappointing where it relates to battery life. Even with an extended battery, it can’t make it through a day on moderate use. Droid owners shouldn’t have that issue, though if battery life is your main concern, we might recommend the Droid Razr Maxx, which has a monstrous 3,300mAh battery, as compared to the 1,785mAh battery in the Droid 4.

There are two good reasons to consider the Droid 4: A solid keyboard and 4G LTE. If you want a phone that can tap into Verizon’s 4G LTE network (trust us, it’s like going from 3G to your home Wi-Fi) and you prefer a physical keyboard, then you can’t go wrong here. Motorola’s typical weaknesses, the screen and the camera, are still problems, but both can probably be overlooked for those who really want a keyboard and LTE. And for anything bad we say about the Droid 4, you will not find a better keyboard on the market. Sadly, at this rate, soon you may not find any other keyboards on the market. The smartphone with a slide-out keyboard is a dying breed.