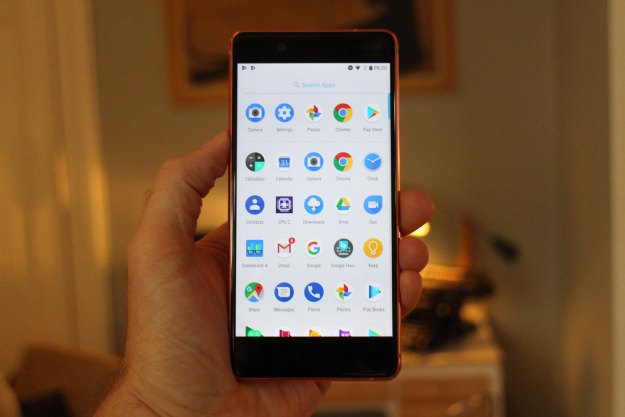 “If we used the Nokia 8’s Bothie mode to shoot a reaction to the phone, it would be all smiles.”

In the nine months of HMD Global’s existence, it has released nine smartphones under the Nokia brand name. Fans waiting for a Nokia flagship phone, however, have been disappointed — until now. This is the Nokia 8: a high-spec, camera-centric Android smartphone that should do the much-loved brand name proud. In our Nokia 8 hands-on review, we explain why.

HMD Global is the driving force behind new Nokia, as it has struck a licensing agreement to use the iconic brand name for its smartphones. But its success comes from some well-chosen and carefully cultivated partnerships with companies such as Google, Qualcomm, and now Zeiss.

Nokia’s name has always been synonymous with camera phones, with Zeiss often providing the lenses. Now the two are working together again. While this is great news, as Zeiss optics are highly respected, it’s not the main reason to be excited about the Nokia 8’s camera.

No, you need to be excited about the Bothie. It’s a bit of a buzzword name, but don’t let that detract from its promise. This is a camera feature that has been well thought out, pushing the hardware to the max, and we think it could inspire plenty of creativity among video creators.

Bothie refers to the Nokia 8’s ability to take a picture with both the front and the rear camera at the same time, and display the results next to each other in a single image. Both images are taken at 13 megapixels, and both have autofocus, so the quality is the same for each.

Fans waiting for a Nokia flagship phone have been disappointed — until now.

Questioning who would use this? You’re not alone. HMD Global’s product marketing lead Katerina Karellas, who spent the last eight months perfecting the feature, told Digital Trends there was some resistance to the concept at first. But once the team was on board, they went all-out to get it exactly right.

This actually resulted in the phone’s development taking longer than planned, so the Bothie feature operated at its best. The two cameras caused overheating issues at first, but with Qualcomm’s help and the addition of a copper cooling pipe inside the phone’s body, this problem was ultimately solved.

We like the Bothie. It will appeal to anyone who loves live streaming, reaction videos, and selfies. It’s two photos in one, and can combine a reaction to an event or surroundings. This is the essence of the selfie. How many are of people smiling in front of a landmark, for example? It’s great to see a fun twist on an old classic.
Andy Boxall/Digital Trends

The Nokia 8’s two rear lenses shoot in color and monochrome, and by default, combine the two for a higher quality image. The camera interface is very simple, illustrated with icons that make functionality immediately obvious.

You need to be excited about the Bothie.

Best of all, there are built-in Facebook Live and YouTube Live functions in the camera app. Going “live” is only a few taps away, and broadcasting in Bothie mode is simple. Bothie is ideal for live broadcasts, negating the need for switching between cameras at different intervals.

We took sample Bothies, and some pictures in color, monochrome, and dual-lens mode with the Nokia 8. The results were great, especially in monochrome, which remains a favorite camera feature of ours. Nokia’s camera interface makes everything easy. This continues through the operating system, where only small changes have been made to pure Android 7.1.1 by Nokia, all with Google’s assistance.

If you’re anything like us, you’ll covet the polished copper version seen in some of our pictures. It’s beautiful in real life, with an eye-catching gleam and a high-gloss finish. In-hand comfort is also supreme, with perfectly rounded side panels blending into the 2.5D curved glass over the 5.3-inch screen. Although the screen isn’t large, the phone itself feels quite sizeable, mainly because we’ve become more used to bezel-less designs from Samsung and LG.

Beyond the bells and whistles, we were pleased to see that the flagship specifications are all there to match the Nokia 8’s competitors. The 5.3-inch screen has a 2,560 x 1,440-pixel resolution; the phone is powered by Qualcomm’s Snapdragon 835; there’s 4GB of RAM; and 64GB of base internal storage (plus a MicroSD card slot if you need more space). You’ll find improved range with Bluetooth 5, Gorilla Glass 5 screen protection, and a 3,090mAh battery keeping it all alive.

It’s beautiful in real life, with an eye-catching gleam, and a high-gloss finish.

Bothies aren’t going to be for everyone. There’s no doubt such a function will appeal to a particular type of person, but as live streaming becomes more mainstream, more people will look for ways to have fun with friends and show off their exploits. The Bothie has arrived on the cusp of that movement, and Nokia’s implementation of the dual-image is slick enough for it to really capitalize on it.

Outside of the Bothie, the Nokia 8 doesn’t shout about its speed, ability, classy style, or simplicity of use; but don’t take that to mean it’s not extremely capable. In our short time with the phone, it impressed us. However, if the Bothie isn’t for you, then you may find the phone a little too shy-and-retiring, due to the unwillingness to shout about how good it is.