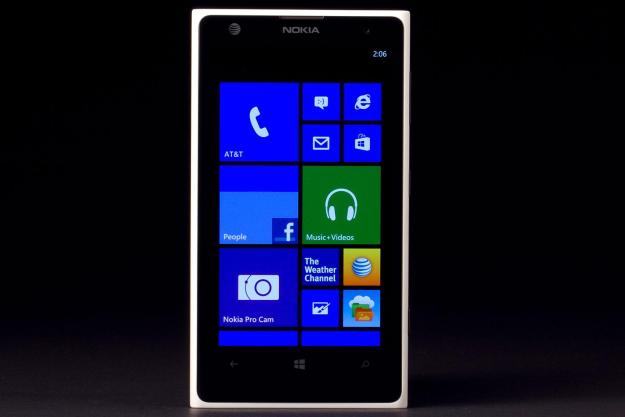 “The Lumia 1020 has the best camera available on a smartphone, but AT&T subscribers will have to pay a hefty $300 premium to get it.”

We should warn you: If you’ve ever read a Nokia or Windows Phone review before (like the Lumia 928), you might feel a sense of déjà vu reading this review. Though it’s packing a powerful new camera and a fancy four-digit number, everything else about the Lumia 1020 could be applied to the Lumia 920, Lumia 925, Lumia 928, and most every other Windows Phone 8 device. There is good and bad in every Windows Phone, as Nokia has learned since it hitched its smartphone dreams to Microsoft’s wagon in 2011.

Comfortable, once you get used to hump

Along with the Samsung Galaxy S4 Zoom, Nokia’s new Lumia is attempting to take smartphone cameras to the next level. But no great leap comes without its consequences, and for the 1020, that consequence is a big round camera bump on the back. At 10.4mm, it’s still thin, but there’s no avoiding the feeling that a camera lens is pressing against your palm as you hold it.

The camera was noticeable and annoying at first – incredibly thin phones like the HTC One spoil us – but after a few hours, we got used to the feel. And after using the camera, we forgave it for having a big booty.

Aside from its big round metal ass, the Lumia 1020 looks and feels fantastic.

Aside from its big round metal ass, the Lumia 1020 looks and feels fantastic. It resembles most every other Lumia. It has a solid, unibody shell made of polycarbonate (color choices: black, white, yellow) with sharp corners, but curved sides. We’re not sure if we’re just getting very used to Nokia’s designs, but the 1020 felt easy to hold and use. The Power and Volume buttons are smartly placed on the right side, allowing you to press Power and hit the navigation buttons – Back, Start, Search – without shimmying the phone up and down your hand, a common problem with big-screened smartphones. Every time you don’t have to shift the phone in your hand is one less opportunity to drop it. We give props to Nokia for recognizing the need for intuitive button placement.

We don’t always add a section in a review for screen quality and sound, but Nokia outperforms many competitors in these areas. Like most of its Windows Phones, the Lumia 1020 has an AMOLED screen with some extra enhancements to further emphasize deep blacks and smooth motion (the Nokia team calls it PureMotion+). The technical details are unimportant. What is striking is how bright and vivid the 1020’s display is when you see the Windows Phone Start screen. It’s gorgeous and the background is so black that it blends in seamlessly with the black glass edging, which itself curves over the edge of the phone just a little. You don’t have to be a screen buff to notice how the colors pop.

The Lumia 1020 doesn’t have the sound chops of an HTC One or iPhone 5, but it does reach a decent volume for a smartphone. Sound tends to have less depth than Apple’s phone, but if you need to play a tune for friends, the Lumia will be audible.

WP8 still has drawbacks, but Nokia’s apps are nice

Windows Phone 8, like Windows 8, is a polarizing operating system. It’s different from Android and iOS, which means it comes with a learning curve. Fans of things like notifications will have an especially difficult transition, because WP8 just doesn’t manage them well, yet. However, having a screen of Live Tiles – which are a mix between a widget that displays information and an icon – does have benefits. WP8’s Start screen has a lot of customization options once you start digging in. You can also Pin almost anything to the Start screen. For example, instead of just pinning the Spotify app, you could pin your favorite playlist.

One of the continuing downsides to Microsoft’s OS are apps. There are some holes in the Windows Phone Store. However, to Nokia’s credit, it has attempted to fill some of those holes. Nokia’s Here Maps, Transit app, Weather Channel app, ESPN app, and CNN app fill in where Microsoft’s app collection fails. Nokia’s new camera apps are also pretty good, but we’ll get into them later.

AT&T has installed five of its own apps, but thankfully, you can delete them all, if you wish. Unless you want to use an AT&T Navigation app instead of Nokia’s, we recommend you do.

This camera puts all others to shame

I am not a photo buff. When I use a smartphone camera, I want it to just work. Most of you are probably the same. That’s why we most heavily weigh the default auto modes of phone cameras higher than anything else. It’s nice to have extra settings, but you shouldn’t have to use them very often. When you whip out your phone to take a shot, you may not have time to fiddle around, either. Luckily, Auto mode is where the Lumia 1020’s 41-megapixel PureView camera shines.

Based on the 41-megapixel camera in the old PureView 808, the 1020 is a hearty step above any other smartphone camera (though we aren’t sure how it stacks up to the GS4 Zoom). Most smartphone cameras top out around 13 megapixels these days, but Nokia heartily tops that.

Here’s how it works: You can get a 34- or 38-megapixel version of any shot, but for the sake of sharing, Nokia crunches all the megapixels down and gives you a 5-megapixel version to share and use, which is plenty big for most of us.

But it’s not all about the megapixels. Nokia has significantly increased the sensor size of the camera as well, the Xenon flash is powerful, and a mechanical shutter is in place.

In a shoot off with the iPhone 5, the 1020’s camera outperformed it in low-light areas and produced more vivid photographs.

As DT’s photography editor Les Shu pointed out at the Lumia 1020 launch event, this may be the first smartphone camera to outperform cheaper point-and-shoot cameras. After taking a bunch of pictures, we think this might indeed be the case.

In a shoot off with the iPhone 5, the 1020’s camera outperformed it significantly in low-light areas and produced clearer and more vivid photographs.

A big difference between the two may come down to a matter of choice. Nokia’s onboard photo filters automatically amp up the brightness and color contrast of objects, sometimes making them appear to almost glow. Apple’s camera shows things more as they are, which means more accurate, but more drab shots. There is a time and place for both styles, but we’ve grown to prefer Nokia’s more beautiful take on the world. The Lumia 1020 also balances bright lights and dark areas far better than the iPhone 5 and other smartphone cameras. So if you have a window in the shot, the rest of your wall won’t look completely black, or your window won’t look like it’s a gate to heaven.

The extra settings in Nokia’s custom Pro Cam app allow you to adjust shutter speed, white balance, ISO, aperture, etc, but don’t require it. A separate “Smart Cam” app (poorly named) lets you take a bunch of pictures at once, like a flipbook, and piece them together in cool ways.

Overall, we are very impressed with Nokia’s PureView. It is the best smartphone camera available today.

This section mirrors what we said about the Lumia 928 because, well, this is essentially the same phone, on the inside, with double the RAM. The Lumia 1020 runs on great – though not industry leading – hardware. It has a 1.5GHz dual-core Qualcomm Snapdragon S4 processor (same as the Galaxy S3 and HTC One X), 2GB of RAM, 32GB of internal memory to store your many pictures, an amazing rear camera, and a 4.5-inch 1280 x 768 pixel AMOLED screen.

Benchmarks: Though we can’t run a Quadrant test on the Lumia 1020 like we can on Android phones, we would guess it would get around 4,000 to 5,000. That number likely means nothing to you, but it means it’s about on par with high-end phones of mid-2012. But even that means little. Let’s put it like this: The 1020 runs apps smoothly and we haven’t encountered any slowdown, except when using the camera app every so often. Windows Phone still has more load screens, slower animations, and seems less responsive than newer Android phones and the iPhone, but the Lumia runs WP8 as fast as any device could.

Talk and Data: AT&T hasn’t yet upgraded to HD Voice, so talk quality is still fairly low. But we haven’t had any troubles hearing or being heard, and quality exceeded the Galaxy S4 Active we recently reviewed (ever so slightly). AT&T’s LTE network has been speedy with download rates around 6Mbps and 1.6Mbps on the upload, which is on par with other devices in our current testing area of rural Michigan.

Battery: Nokia has packed a 2,000mAh battery in the 928, which isn’t as massive as the 3,000mAh batteries in the Droid Maxx and some larger phones like the Galaxy Note 2, but seems to be big enough to let the Lumia mostly make it through a day. Unfortunately, the battery is not removable, so if you run out of juice, you’ll need to charge up. Nokia claims that the battery will last 6.8 hours if you’re continuously watching videos and 5.5 hours if you’re browsing the Web on Wi-Fi. This is about in line with what we’ve gotten. Using the camera heavily, we’re at about a 40 percent charge in just a few hours, but on an ordinary day, we’d expect it to last longer. If you’re in dire trouble, there’s a battery saving mode, which can give you an extra hour or two of life.

The Lumia 1020 lives and dies by its camera, and that camera is as amazing as Nokia claims. If you value high-quality shots above all else and you’re on AT&T, we recommend you pick it up. There are a few downsides. The battery life isn’t great, you will have to put up with areas where Windows Phone lacks, and that bump on the back isn’t going away. This will never be a supremely comfortable phone to hold. Oh, and the price is high. This will set you back $300 with a two-year contract and $660 without. That’s a high premium, especially when you can get the Galaxy S4 Active – which is more powerful, waterproof, and also has a decent camera – for $200, or $595 without a contract. And there’s always the iPhone 5, which is never a bad decision.

There’s really one question you need to ask yourself: Do you feel lucky? Because with any other camera, you’re going to need a little luck to end up with a good shot. Nokia’s PureView ups your odds.