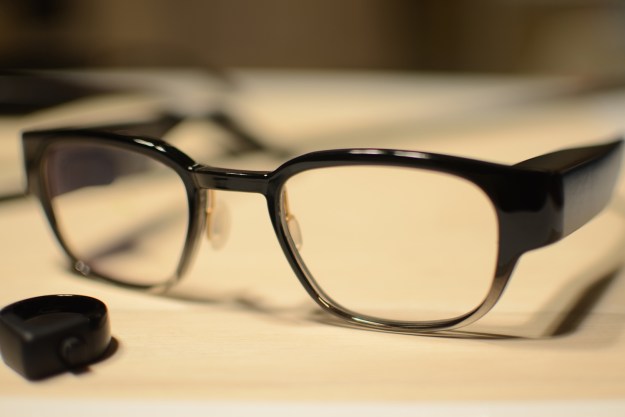 “Focals, like Google Glass, want to help keep our heads up and be more present in the real world.”

Never got a chance to try Google Glass for yourself? If you liked the idea of smartglasses but didn’t want to be labeled as a “glasshole,” you might be interested in giving Focals a shot. It’s a pair of glasses that shares similar features to Google Glass, allowing you to walk about in the real world with notifications and other data displayed on the glasses, meaning you can leave the phone in your pocket or handbag.

Focals is made by a Canadian company called North, formerly known as Thalmic Labs. We’ve covered Thalmic Labs before, as they created Myo, an armband that can detect gestures. The branding change to North is also a part of today’s announcement, and a reason for the change was that Thalmic Labs sounded too “techy,” according to North CEO Stephen Lake.

“It’s not the right brand for this product,” Lake told Digital Trends. “We started from a lifestyle/fashion perspective, saying we want to make amazing-looking glasses you’ll wear every day. And so, we wanted a brand that sort of reflected that as well. North means two things: One, it’s kind of the North Star of how technology should evolve and kind of this positive way of being there in the real world … and two, it just speaks to the origin story of being from the north instead of Silicon Valley.”

We spent some time with a pair of Focals and went through the process of making one — here’s what it’s like.

Focals are eyeglasses, and acquiring a pair will be quite difficult at first. You’ll need to be near New York City or Toronto, as North has opened two showrooms, where you will need to schedule an appointment to go through a fitting process. The glasses also cost $999, so it’s a bit of an investment.

Each pair of Focals is custom-made, and this process starts with a 3D scan of your head. You’ll be in a little room, where a showroom employee will ask you to stare at a dot on a screen. Various other cameras surrounding you will create a 3D scan of your head, which will be used to establish a size for the Focals. Optometrists will also be available to take your lens prescription if needed and to answer any additional questions, or you can just get prescription-less glasses if you have 20/20 vision or wear contacts. Next, you’ll need to choose a style.

We tried on a pair, and they felt comfortable, just like a traditional pair of glasses.

“The number one problem that we had to solve from a product perspective is how to make it not look like you’re wearing smart glasses,” Lake said.

That’s why there are a few design and color options to choose from that mimic traditional eyeglass design, and Focals are made from the same materials. They look fairly normal from a distance — it’s difficult to tell they are smartglasses — but pay a little more attention as you get closer, and it becomes more obvious. The projector helps give it away, because it sticks out of the inside of the glasses, but the arms also look quite thick. Still, these are undeniably more subtle than Google Glass. It helps that there’s no camera, and that the glasses won’t look “smart” until someone gets quite close to you.

We tried on a pair, and they felt comfortable, just like a traditional pair of glasses. The glasses didn’t quite fit us perfectly because this was a demo model. We weren’t able to wear them for much time, so we can’t quite comment yet about fit. After you choose the style you want, you’ll need to revisit the showroom to receive your final unit and make sure the fit is correct.

You can’t fold the arms of Focals entirely like traditional glasses, due to the tech inside, but you can fold them halfway. Each pair comes with a carrying case you can place them in, which doubles as a battery pack. Lake said Focals should last an entire day based on normal usage. We’re a little concerned at the size of the case, because it looks like it will take quite a bit of room in your handbag or backpack.

The idea behind Focals is to limit the time we spend staring at screens, and to help us become more present. Having a handful of core notifications and some essential information show up near our eye, Lake believes, is more beneficial to us than constantly having to pull out our smartphones.

We love the way the user interface is designed, with colorful and minimal icons that share a synthwave aesthetic.

“We’re getting more distracted looking at screens and what’s happening out there in the digital world,” he said. “The alternative we saw … is how do we give you those amazing benefits of technology … the things that are so great about it — staying connected to the people you care about, staying on top of what’s important — but do it in a way that lets you stay heads-up and present in the real world.”

Focals, which are powered by a smartphone-grade processor, can show the time, weather, text messages, calendar events, third-party notifications, and turn-by-turn directions. All this information is sent from the projector onto the glass of the lens, which is then reflected into your eye. Lake said it’s a minimal amount of light, and it’s harmless. We love the way the user interface is designed, with colorful and minimal icons that share a synthwave aesthetic.

Looking at Lake, we noticed him looking slightly off our right, and we could see a slight flicker of purple light on the glass; he was checking his notifications. It was subtle, and it hardly took him out of the conversation. It would be completely different if he took out his phone and started swiping around on it during our chat.

You can control the notifications you want to see through the smartphone app, so you don’t need to be bombarded. It’s Bluetooth that connects the glasses to an Android or iOS smartphone, and like smartwatches, you can respond to notifications on Android but not on iOS.

There are only two third-party integrations at the moment: You can access Alexa — and it’s just as useful as in an Echo — and you can request an Uber. Lake said the company wants to control the quality of apps created for Focals, so it’s not opening up to third-party developers just yet.

How do you interact with Focals? There are no touch controls. Instead, you have to wear another wearable — the Loop. It’s a ring that has a tiny joystick. You can move the joystick around in five directions with your thumb, and you’ll see the interface move on the screen. It’s quick to react, but it feels a little silly. The joystick design doesn’t stick out, but it could have been a little more subtle. Thankfully, it’s not as dorky as swiping gestures on the side of the glasses. The Loop has a spot to charge in the same case as the Focals, and Lake said it should last a week or more.

To respond to texts, you can choose from quick responses — including emojis — or use your voice. There’s also a speaker on the arms of Focals that let you hear pings when notifications come through, Alexa when she’s responding to you, or sounds from moving throughout the operating system.

These notifications fade from view five seconds after they appear, and we didn’t find them distracting to look at, but we also stood stationary. We’ll need to take Focals out on the street to see if they will help keep us “heads-up,” instead of staring down at our screens.

North’s Focals cost $999, which includes prescription lenses if needed, the Loop ring, and the charging case. It also comes with sun clips to convert them into sunglasses. Pre-orders are open now, and you’ll need to schedule an appointment to start the fitting process. The New York City showroom is at 178 Court Street, Brooklyn; and the Toronto showroom is at 113 Ossington Avenue.

Focals replicates more or less what you can do with a smartwatch, but with a watch, you’re still looking down. Will having this information by our eyes change the way we use our smartphones, or walk around? Time will tell, but the biggest hurdle is convincing people to wear a thick pair of glasses all the time.