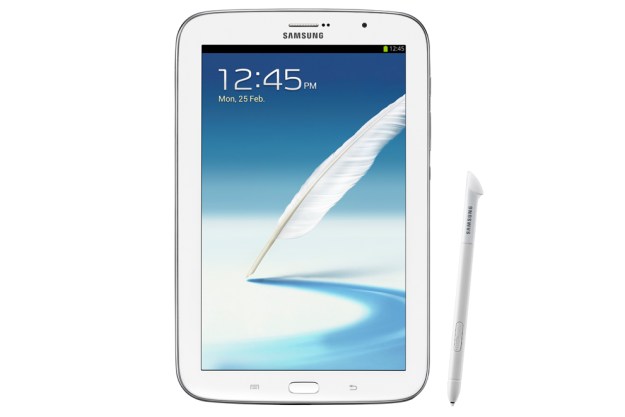 “The Galaxy Note 8.0 is Samsung’s strongest tablet entry yet, and a good alternative to the iPad Mini.”

Samsung is willing to try anything once, especially if it’s a new tablet size. Hot on the heels of Apple’s successful rollout of the iPad Mini, Samsung is back at the tablet game with its own, almost identical Galaxy Note 8.0. It’s just about the same size and packs a stylus and the same software combination that has helped the Galaxy S3 and Note 2 become worldwide bestsellers. The iPad Mini is less than six months old, but it already has some serious competition.

If you want to know what the Galaxy Note 8.0 looks and feels like, we have a mental exercise for you. Imagine three Galaxy S3 phones, two placed side by side and another placed north of them lying lengthwise. This is how big the Note 8.0 is. If that oddly complicated visual doesn’t work for you, try this: Have you seen an iPad Mini? Okay, cool. The Galaxy Note 8.0 is just about identically sized in every way (it’s about half an inch longer because it has a longer screen, like all Android tablets). Samsung doesn’t tinker with success and the iPad Mini is a success.

Having said that, there are some differences. Instead of an aluminum shell, Samsung’s tablet is covered in polycarbonate plastic, much like its phones and other gadgets. It looks just like a Galaxy S3 or Galaxy Note 2 (or Galaxy S4, or any Galaxy product in the last year).

You’ll have to be the judge of what size you like best, but we prefer this new breed of 8-inch (ish) tablets. Since getting the iPad Mini, we’ve hardly felt the need to whip out our full-size iPad and we suspect the same will happen here. The screen is large enough that you can do anything you can on a 10-inch tablet, but small enough that you can hold it comfortably in one hand and thumb type without over extending your thumbs.

Though it doesn’t use AMOLED, like many smaller Samsung devices, the Galaxy Note 8.0’s TFT LCD screen looks great. It displays colors brightly and while it’s not a full HD display, we haven’t been bothered by the pixilation we’ve noticed on the iPad Mini.

The screen also has an added Wacom layer to it, which makes it incredibly accurate when using a pen stylus (there’s a S-Pen stylus built in). It’s still not as good as using pen and paper, and we really wish you could use it more effectively outside of Samsung’s stylus-friendly apps, but you won’t find better stylus support on any other tablet. So if handwriting or drawing is your thing, this is a good option.

Sound-wise, the Galaxy Note 8.0’s small stereo speakers don’t match up to the crispness of Apple’s iPad line, but is one of the better sounding tablets on the market. It does sound blown-out at the highest volume available. If you’re buying a tablet, no matter what option you choose, you’re not going to be blown away by the built-in speakers. These devices are just too small to fill a room properly. Buy a Bluetooth speaker or stereo if you want good sound.

The Note 8.0 runs on Android 4.1 Jelly Bean, which is new enough that you aren’t missing much, but it’s definitely not the newest version of Google’s Android operating system. Like the Galaxy S3, Note, and every other Samsung mobile product, it’s also caked with a brightly colored, almost Fischer Price-like user interface design. And sadly, it has none of the new apps or updated interface elements present in the Galaxy S4, which will hit shelves sometime in the next month or two.

As has become the norm, Samsung has crammed as much of its own software into the Note 8.0 as possible. It’s not a problem, as many of the apps and added menus are sometimes useful (there’s a menu on the side that pops open to let you run apps split screen, two at once), but Samsung borders on pushing its own apps too hard. For instance, when setting up the tablet, you’re pressured to sign up for a “Samsung account” as well as a Google account. Samsung has a lot of apps that compete directly with Google, like it’s app store. Its calendar app can get on our nerves; it’s busy and made to look like a gaudy leather binder. We question whether Samsung’s Siri clone “S-Voice” is actually more useful than Google’s baked-in Google Now (also a Siri clone of sorts), but it’s taken Google Now’s prominent position in the interface (double tap the home button). Samsung’s browser also competes with Chrome. Having said all that, we can’t complain about the free Dropbox storage included (50GB for 2 years).

Finally, we often complain about Android’s lack of great tablet apps. This is improving, but the iPads still have better software, and more of it. However, the good thing about the 8-inch screen size is that, if you have to, phone apps still look and run okay on a screen this size. So you likely won’t be completely out of luck finding the apps you need. Android’s phone app selection is robust.

Samsung doesn’t skimp on processing power and specifications. You’ll find little to complain about here. The Note 8.0 runs on a 1.6GHz quad-core processor, has 2GB of RAM, 16GB of built-in memory (with a microSD slot), a 1280×800 pixel TFT LCD screen with Wacom touch technology, a stylus, a 1.3-megapixel front camera, and all the sensors and accelerometers you could want. It connects to the net via Wi-Fi, like most tablets.

The only disappointing element is the 5-megapixel rear camera. Many new tablets don’t even have a rear camera, so we find it hard to complain too much, but the Note 8.0’s shooter is nothing special. It has a slow shutter and poor autofocus, similar to smartphone cameras about 3 years ago. Expect a lot of somewhat lifeless, blurry shots. Don’t even try to photograph in dim conditions. Again though, don’t buy a tablet for its camera quality. You’re going to be disappointed across the board.

Samsung has packed a 4600mAh battery into the Note 8.0. We haven’t had it long enough to do a complete battery rundown test on it, but in practice, we believe you’ll get average tablet battery life out of it: between 7 and 9 hours, depending on what you’re up to. This is ever-so-slightly lower than the iPad line, which gets between 9 and 10 hours, but there isn’t enough of a difference to base your purchase around it. If you’re a battery stickler, there are settings in the menu, and other ways you can reduce how much you tax the battery.

The Galaxy Note 8.0 is Samsung’s strongest tablet entry yet, and a good alternative to the iPad Mini. It mostly matches what Apple accomplished with the Mini and exceeds it in a few ways, most notably with the built-in stylus. However, it will run you about $70 more, with a price of $400 when it goes on sale April 11. We cannot predict the future, and the higher price may hurt it, but if Samsung updates this with all the features of the Galaxy S4, we can see it being a success. It’s the most portable, yet fully functional and useful, tablet outside the Mini and worth a look. Kudos to Samsung.

Update by Jeff: I’ve added in the official price of the Note 8.0 and corrected an error with the screen type.