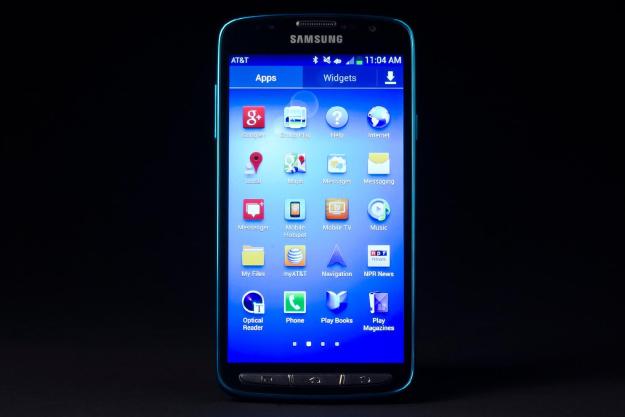 “The Galaxy S4 Active is the best phone on AT&T. It has everything the S4 has, with added water and dust resistance. Like the S4, battery life isn’t amazing, but the Active requires no compromises.”

The Galaxy S4 Active is possibly the best-designed high-end phone we’ve ever used.

Why isn’t this the Galaxy S4? Usually, in an intro, we’ll explain the history of a product and tease whether it’s good or not. Not today. The Galaxy S4 Active is a fantastic phone, but we’re a little upset that it’s only available on AT&T and a lot of people are going to be stuck buying a regular Galaxy S4. Unless you buy your phones strictly for vanity, The Galaxy S4 Active is possibly the best-designed high-end phone we’ve ever used. It has all the amenities you’re used to on an Android phone, but it’s more durable and waterproof. And it doesn’t cost any more, either. Our biggest problem is that only a third of you will be able to buy it, and most of you will be confused as hell about its name, or what it is. What the hell, Samsung?

The Galaxy S4 Active doesn’t look a whole lot different from the Galaxy S4 – at first. It’s slightly thicker and taller (a millimeter or two), but it’s still comfortable to hold by anyone who can get their mitts around a Galaxy S3 or S4. It has the same 5-inch screen on it, same button layout, same everything. The difference is that the S4 Active looks like a Galaxy S4 with a thin plate of armor on it. We like armor.

The Active has a thicker polycarbonate (durable plastic) shell than the standard S4, but not by much. To help use it underwater, because, you know, it’s somewhat waterproof; Samsung has swapped out touch navigation buttons for the real thing. We found it refreshing to press an actual Home, Back, and Menu button for once. The buttons are easy to press and have a good click to them. (We’re sure you were dying to find out how easy it is to press the Home button. That’s why you clicked on this review, right? If so, you’re going to love that the Power and Volume buttons are easy to press, too.)

The Active is as comfortable as any phone. Samsung isn’t reinventing or rocking the boat with this one, and that’s fine with us. We do really like the aqua-tinged blue coloring. We recommend it over the gray.

Waterproof and dustproof, but not shockproof

The best feature of the Galaxy S4 Active is its IP67 rating. Like a few rugged phones on the market and the Sony Xperia Z, the Active is dust and water resistant. Nothing is completely waterproof, but the Active can be completely submerged in up to 3 feet of water for up to 30 minutes without any problem. Though it’s always nerve wracking to test out, we submerged the Active, took it in the shower, and covered it in crazy things like soap and dirt. None of it phased the phone. It still works fine. The water stayed out of the phone’s innards and the dust, well, washed right off.

The Galaxy S4 Active isn’t a “rugged” phone, though the rubbery edges and rivets Samsung pasted on the back may make you think it is. If you drop it, it may still break. But we can tell you that it appears to be at least a little more durable than a standard Galaxy S4.

The S4 Active looks like a Galaxy S4 with a thin plate of armor on it. We like armor.

Durability and ruggedness elude the S4 Active, but we can’t express how freeing it is to have a phone that’s mostly waterproof. Smartphones are so delicate, but now you have one less thing to worry about. Go ahead; take out your phone when you’re stuck in the rain. Take it in the shower if you need to check your mail. Accidentally drop it in the toilet. It isn’t going to die; you aren’t going to have to buy a new phone. The feeling is liberating. We can’t wait for this type of technology to reach more devices.

Update 7-31-2013 by Jeff: Just to clarify, We do not endorse using this phone underwater. The water-resistant functionality is great in case of an accident, but you should not actively take the Active underwater. This is why we did not cover the phone’s “Aqua Mode” in this review. We don’t trust the water-resistance well enough and the warranty does not cover water damage. You can learn more about the GS4’s water issues in this article.

It works just as well as a Galaxy S4

We will direct you to the Galaxy S4 Review to learn more about the software on the Active. It’s identical. This phone is almost identical to the S4 in every way, and that’s mostly a good thing. Samsung does tend to go overboard, and shove in as many features and apps as it can (it really wants you to like it more than its competitors, so much so that the S4 Active was actually created seemingly because of Sony’s waterproof Xperia Z), but you need only ignore what you don’t want. We recommend you skip Samsung’s Hub and instead use the Google Play Store to download your apps.

The Active runs the newest version of Android, version 4.2 Jelly Bean, modified to look a little different from other phones. This helps make it one of the most responsive and fast Android phones on the market. We have few major qualms with Samsung’s TouchWiz user interface, and it adds some cool features like eye tracking and motion control, should you choose to enable them. There were moments during testing when we wished there was a Galaxy S4 Active Google Edition – maybe someday.

It’s just as powerful as a regular S4

The interface is the same, and so is the underlying power. The S4 Active runs on the same 1.9GHz quad-core Snapdragon 600 processor (Geek specs: Qualcomm MDM9215 + APQ8064pro) found in the Galaxy S4, has 2GB RAM, 16GB of internal file storage (with MicroSD slot for expansion), and a 5-inch 1080×1920 pixel Super AMOLED screen. The screen continually stands out as one of the most responsive, pixel dense, and vivid in the industry; it looks good. The only weakpoint of the Galaxy S4 Active appears to be its rear camera, which clocks in at 8-megapixel instead of 13, like the S4. Honestly, this didn’t bother us.

This is about as powerful a phone as you’ll find in mid 2013.

In the Quadrant benchmark test, the Active performed slightly better than its predecessor with a score of 12,500. The S4 got a 12,200. What does that mean? Nothing much. The difference is negligible. Both phones perform much higher than most rival phones, save for the HTC One, which also cracked the 12,000 mark. This is about as powerful a phone as you’ll find in mid 2013. Expect it to remain a good phone for at least a year, like the Galaxy S3.

There is nothing standout about the Galaxy S4 camera, except that you can use it underwater. Don’t expect shots to come out particularly lovely when you’re submerged, but it’s possible. As mentioned, you’ll be stuck with 8 megapixels on the S4 Active versus 13 megapixels on the regular S4 and many of the its competitors. Still, he camera performance was on par with top phones of late 2012. It doesn’t reach the quality of the iPhone 5, but it should perform well in most circumstances.

We had some trouble with low-light shots, but no matter the phone camera, we always have trouble with low-light shots. Samsung’s filters are good, and its camera app is robust. Don’t buy this phone if camera quality is your number one concern, but if a “good camera” is a check on your list, go ahead and tick the box. 1080p video recording is also present and works as advertised.

Though we read a few negative reports about call quality, we’ve had no issues with the Galaxy S4 Active’s call quality. We made a number of calls and had no trouble hearing or being heard. The Active’s volume gets a little louder than some handsets making it easier to hear if you’re a little hard of hearing (as I can be). A conference call using the S4 Active went well.

Though it has a large 2,600mAh battery in it, like most phones these days, there is nothing impressive about the battery life of the Galaxy S4 Active. If you use the phone more than moderately, you’re going to have trouble holding a charge for a full day and evening. When we started downloading podcasts and hitting the LTE network hard, the Active’s battery drained itself with the haste of a frightened horse. Luckily, the battery is removable, so you can buy extras if you are going on a long trip. We recommend you buy them from Samsung.

Like we said in our introduction, the Galaxy S4 Active is one helluva phone. With almost no sacrifices and no price increase, you’re getting a Galaxy S4 that is water and dust resistant. These are two features that don’t sound like a big deal, until you have them. It’s reassuring to know that a few rain droplets can’t ruin your $650 phone. The S4 Active is mess proof, and that’s great. Why Samsung decided spin this feature off as a separate phone, only available to AT&T users, we do not know and aren’t happy about. But if you are on AT&T, it’s hard not to recommend the Galaxy S4 Active. It has everything other phones have, and it’s waterproof. This is the AT&T phone to buy.