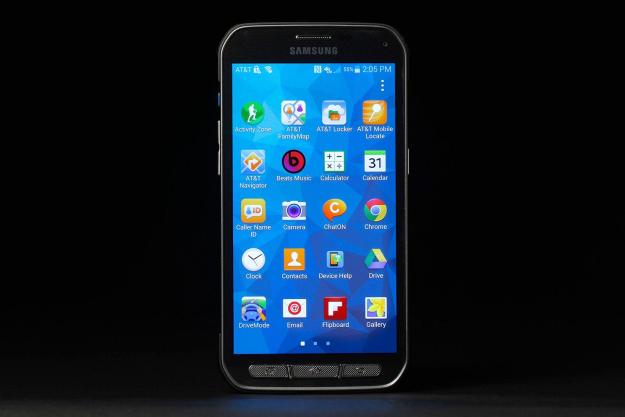 While we liked last year’s Galaxy S4 Active, Samsung’s take on a ruggedized version of its flagship Galaxy S4 handset, it felt like a slight step down from the Galaxy S4, with a lower-resolution camera, a non-AMOLED screen, and shorter battery life.

With the Galaxy S5 Active, Samsung delivers a phone that’s much more akin to the internals of the standard S5, and all the superphone goodness that entails. The main thing missing with the Active is the S5’s fingerprint reader. But if you’re the type who may be using the S5 Active while wearing gloves or with dirty fingers, you probably won’t miss it much.

Instead, Samsung adds large, tactile buttons that are super-easy to find, and adds a blue “Active” key on the left side that launces a handy Activity Zone app or launches the camera (or any other app you choose).

The Galaxy S5 Active certainly isn’t as pretty as the standard S5 (or as thin, or as light), but it’s far from bulky. It’s still mostly plastic, yet feels much more sturdier than the Galaxy S5.

It can also withstand being dunked in up to three feet of water for 30 minutes. But that’s no longer the unique feature it once was. Sony’s recent Xperia Z phones are similarly water-friendly, as is the regular-old S5. So if you fear dropping your phone in the pool (or the toilet) this summer, the S5 Active isn’t your only option. There are though, plenty of other reasons why this is a great phone. Just know that you’ll have to be on AT&T to pick one up; the phone is exclusive to that carrier in the United States—at least for now.

The standard GS5 is all about swooping lines and rounded corners, but the S5 Active has flatter, almost iPhone-like edges, with extra, ruggedized plastic bumpers on the corners that hold up. Ours easily survived several intentional drops and dings.

Aesthetically, the phone reminds us of Panasonic’s Toughbook laptop line, with some Droid Razr thrown in for good measure. It’s comfortable enough to hold, but a world away from HTC’s M8. The back of it is also flat and slippery.

The S5 Active held up well to several intentional drops and dings.

Worse, with the speaker (which produces passible, though not exceptional audio) cranked up high, the entire back of the S5 active vibrates, making the phone uncomfortable to hold—especially with one hand.

The back of the S5 Active also has a heart rate sensor, which may be handy for some. But for those who are truly active, the fact that you have to stand still for several seconds (and try not to make noise) when you’re using it will make it frustrating.

The Titanium Gray scheme of our review model will seem drab to some. But the S5 Active is also available in Ruby Red and Camo Green, so you can make sure your phone matches your ensemble, whether you’re picking out a chiffon dress for the dance or putting on chest-high waders to go duck hunting.

All the buttons on the phone are very tactile, so you should have no problems locating them with a gloved hand. The power button is located about a third of the way down the right side, while the volume rocker and Active key are located in a similar spot on the left edge. The tactile Home, Back, and Menu keys below the screen take the most getting used to—especially if you’re an experienced Android user. But after a day or so, we found ourselves liking them, as they let us easily mash the Home or Back button before we even brought the screen up to our eyes.

While the backside of the GS5 Active looks like it’s bolted on, it actually peels off with the help of a small divot above the camera, revealing a removable battery and a MicroSD card slot above the SIM sled.

Since this is a water-resistant phone, there’s also a pop-off door on the bottom, covering the Micro USB charging port (USB 2.0, rather than the 3.0 port on the Galaxy S5). We still don’t like the fiddly nature of port doors and wish someone would find a way to make an open USB port waterproof. But at least the door on the S5 Active feels more durable than the one found on the Xperia Z1S.

The S5 Active features most of the same software features and freshly revamped TouchWiz skin as the standard S5, which mostly means things are more cluttered and brightly cartoony than stock Android. But if you don’t like the feel of Samsung’s skin, it’s simple enough to install a launcher (like Apex or Nova) to change the way the OS looks.

The real differentiator here with the S5 Active is the blue Active key. By default, long pressing this button on the left side of the phone launches the camera app, and you can use the volume rocker as a nice tactile shutter button.

If you short press the Active key with the phone unlocked, it brings up the Activity Zone app by default. This will be handy for outdoor types, as it shows barometer and compass settings, including elevation and GPS coordinates. There are also buttons on the app to use the LED flash as a flashlight (complete with attention-getting blinks, which could come in handy if you’re in trouble), and access the stopwatch.

You can also easily change the Active key settings to open other apps instead. In a smartphone world increasingly dominated by touchscreen buttons that you have to look at to use, we found a dedicated hardware shortcut button refreshing.

The same powerhouse internals as the GS5

Just like the Galaxy S5, the S5 Active sports a quad-core Qualcomm Snapdragon 801 processor running at 2.5GHz, and 2GB of RAM, and 16GB of storage (expandable via MircoSD).

It handled every app and game we threw at it with ease and never felt sluggish.

Benchmark scores put the S5 Active dead even with the standard S5, at about 23,000 in Quadrant, and more than 18,000 in 3D Mark’s Ice Storm Unlimited. That’s powerful, but also par for the course when it comes to high-end phones these days.

In use, the phone handled every app and game we threw at it with ease, and never felt sluggish or bogged down at all.

And just like with the standard S5, everything on the phone looks great, thanks to the 5.1-inch 1080p Super AMOLED screen. The screen technology tends to oversaturate colors a little, but the S5 is easier to read in direct sunlight than many other phones, and it’s hard to argue with its very deep blacks.

The S5 Active also shares the same 16-megapixel camera as the Galaxy S5, along with support for recording 4K video (at 30fps). You can also technically take photos underwater with the S5 Active, since the volume rocker works as a shutter button. But just as we said with Sony’s Xperia Z1S, we wouldn’t consider this much of a selling feature, because how often are you do you find yourself in crystal-clear water surrounded by things you want to photograph? If you answered anything other than “hardly ever,” you should probably get a waterproof kit for a DSLR.

On dry land, the S5 Active takes pretty good photos for a modern high-end smartphone. Low light sensitivity in particular is much better than it was just a year ago with the Galaxy S4. And we like that Samsung has cut down the number of camera modes that come pre-installed in the app, letting users install more if they choose. Having fewer modes to scroll through can make getting capturing a fleeting moment a lot easier and less stressful.

The GS5 Active should get you through the longest of day trips. We put the phone through a long 17-hour day of medium-to-heavy use, downloading and installing apps (mostly on Wi-Fi), running benchmarks, taking photos, making a couple calls, and frequently checking Facebook. When we finally went to bed, the battery still showed 29 percent remaining.

If you’re looking for a phone that can stand up more drops, dings, and dirt than the average smartphone, and you like the idea of tactile buttons, there’s no reason not to snatch the Galaxy S5 Active up (provided you’re on AT&T), as it’s priced the same $200 on contract as the standard Galaxy S5, which has nearly identical internals.

But if you like the idea of the fingerprint reader, there’s little reason not to just pick up the vanilla version of the Galaxy S5 and get yourself a decent case. Because both Galaxy S5’s are now water and dust-resistant (provided you plug the cap that covers the USB port), the S5 Active just isn’t as unique as the S4 Active was last year.

And while the S5 Active feels a lot more solid and rugged than the standard Galaxy S5, it still has an all-plastic exterior. If a premium look and feel is what you’re after in a modern smartphone, HTC’s One M8 has the S5 Active (and all Samsung smartphones) beat on that front, with its unibody aluminum shell, which is admittedly slippery, but stunning.